There’s no denying it: Americans are ditching dairy “products.” By now, you’ve surely heard that the demand for dairy milk has tanked as consumers switch to vegan drinks such as soy, coconut, and almond milk in droves. This shift has led many to wonder about the benefits—and the costs—of swapping your cows’ milk habit for an almond milk fix. Maybe you’ve heard rumors about water use, or maybe you’re concerned about added ingredients. Well, we’re here to give you the facts and persuade you to stop drinking cows’ milk today!

Here are some reasons why almond milk is better than cow’s milk: 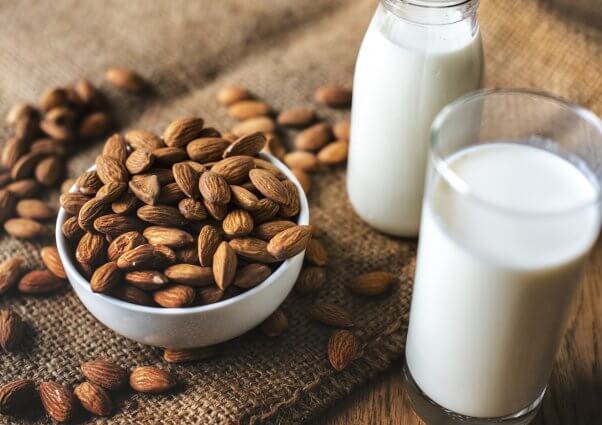 1. You can make your own almond milk at home without raping or murdering anyone.

Female cows produce milk in order to feed their babies. In the dairy industry, they’re forcibly impregnated in order to start the lactation process. When their babies are born, the milk they long to feed their young is instead taken for human consumption. Many male calves are torn from their mothers’ sides shortly after birth, locked in a veal crate, and killed before their first birthday. Mother cows cry out in anguish when their babies are taken from them. This video shows one mother chasing after her calf as he or she is being carted away. After a brief recovery period, the cows are raped again and the process starts all over. When their bodies give out, they’re chopped into pieces and sold as dog food.

If you don’t have space in your home to rape and/or murder a cow, try this simple recipe to make your own almond milk—no sperm gun required!

Cows eat a lot of food. As a result, they produce a lot of solid waste—and it’s really bad for the environment. Animals on farms, including those in the dairy industry, produce 1.65 billion tons of manure each year. Since there are no processing plants for animal sewage, some of that waste is stored in “lagoons” (here’s a nightmare-inducing story about two men who drowned in manure lagoons), and some of it ends up in our waterways and drinking water. Cows also produce about 150 billion gallons of methane per day. Methane is 25 to 100 times more damaging to the atmosphere than CO2.

Did you know that it can take more than 600 gallons of water to produce a single gallon of cow’s milk? A single cow used for her milk on an industrial feed lot can consume up to 100 gallons of water a day, and on any given day, there are more than 9 million cows on U.S. dairy farms. What’s more, alfalfa hay grown specifically to be used as animal feed requires an estimated additional 1.6 trillion gallons of water a year. An estimated 55 percent of the country’s freshwater supply goes to raising animals for food.

The other 45 percent doesn’t go to almond farming. We checked. We’re good.

To make them produce more milk than they would naturally, cows may be dosed with recombinant bovine growth hormone (rBGH), which puts them at increased risk of developing mastitis, a painful inflammation of the udder. Even cows who aren’t given rBGH still produce hormones like estrogen and progesterone, which come out in their milk.

Almonds don’t have udders, and there are no hormones or antibiotics in almond milk. Instead, almond beverages are often fortified with vitamins and minerals or flavored to taste like vanilla. Drink up.

5. Sixty-five percent of adults worldwide are believed to be lactose-intolerant.

An estimated 90 percent of Asian-Americans and 75 percent of Native and African-Americans suffer from the condition, which can cause bloating, gas, cramps, vomiting, headaches, rashes, and asthma. But it’s not just adults: Cow’s milk is the number one food allergen among infants and children.

Apart from humans, no species drinks milk beyond the natural age of weaning or drinks the milk of another species. Cow’s milk is suited to the nutritional needs of calves, who have four stomachs and gain hundreds of pounds in a matter of months, sometimes weighing more than 1,000 pounds before they turn 2 years old.

Almond milk is believed to be the first plant-based milk developed by humans, predating soy milk by some 200 years. Humans have been drinking almond milk for centuries.

If you’re ready to join the dairy-free revolution, get started now:

For cows, for your personal health, and for the planet, please ditch dairy milk today!