Wool, skin, fur, and feathers only look good on their original owners. So PETA is taking some outspoken sheep—along with cows, foxes, and geese—to malls across the country so that they can tell shoppers exactly how they feel about the wool, leather, fur, and down. 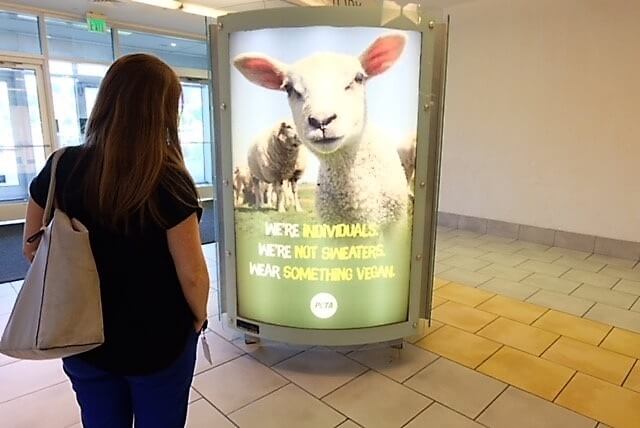 The ads are up now near Forever 21 (which continues to sell wool) at the Mondawmin Mall in Baltimore and near Macy’s and H&M (which continue to sell leather and fur) at the Town East Mall in Mesquite, Texas. They’ll be popping up at other shopping centers, too. 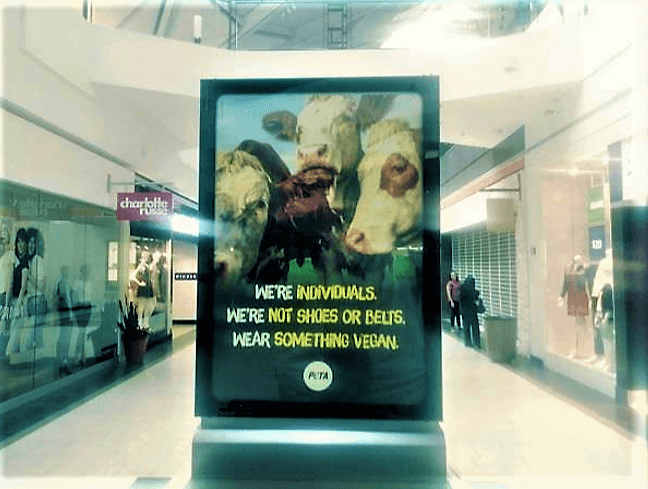 Billboard versions are up outside Desert Hills Premium Outlets in Cabazon, California, and Destiny USA mall in Syracuse, New York. (And PETA’s protesting sheep ad in Syracuse also happens to be near The Great New York State Fair, which includes many exhibitions that exploit sheep.) 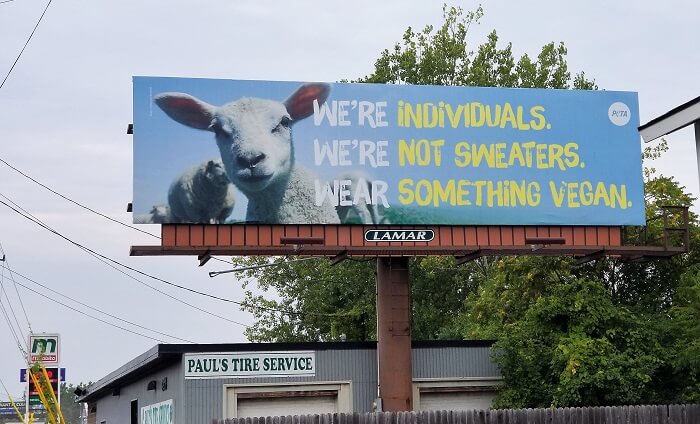 And other animals are riding around New York City on taxi toppers during Fashion Week.

These ads will make shoppers think about the fact that animals don’t want to be trapped, beaten, bludgeoned, shot, plucked, skinned alive, or killed so that their parts can be made into a stiletto or a sweater any more than humans do.

As numerous PETA investigations have shown, the millions of cows whose skin is turned into leather endure dehorning and castration, often without painkillers. Several PETA video exposés of the wool industry have revealed that sheep are beaten, stomped on, mutilated, and even skinned alive, while a PETA exposé of the down industry in China documented that workers often pluck the feathers of sensitive geese and ducks several times a year before they’re killed. Dead birds who’d been used for their feathers were found decaying in crates and ponds or tossed outside like trash.

Animals’ wool, skin, fur, and feathers are theirs. And with so many readily available cruelty-free materials, there’s no need to wear animal-derived ones. Check out PETA’s “How to Wear Vegan” guide to find loads of looks that are humane and effortlessly chic, and tell retailers that are still hawking animal parts that skin isn’t in.