In a sorry attempt to save its sinking ship, SeaWorld is introducing new animal encounters this summer. The animals who will be forced to endure the unnatural close-up tours include beluga whales, walruses, sea otters, flamingos, seals, and sea lions. While the encounters do come at a cost to guests, it’s the animals who will pay the real price.

Chances are, if you were planning to pay to feed the otters or take a selfie with a sea lion—or if you’ve done so in the past—your intentions were good. Most folks who wish to get up close and personal with these animals are genuinely interested in learning more about their lives. But that’s exactly why you shouldn’t book one of SeaWorld’s new animal encounters or patronize any of its abusement parks at all. The lives of these beluga whales, sea lions, orcas, and other prisoners couldn’t be more different from those of these species in the wild. 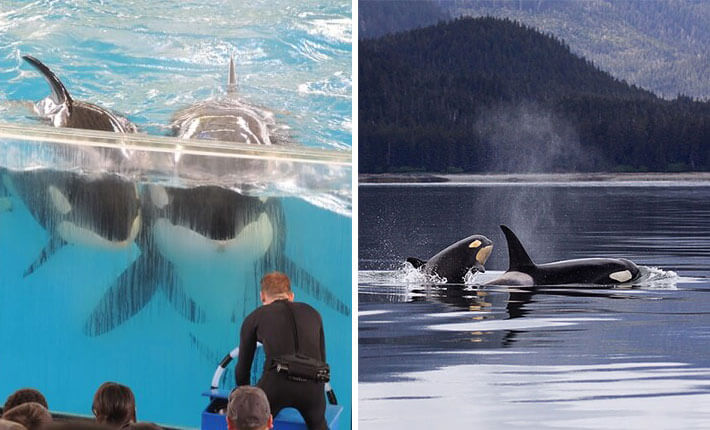 There’s nothing trendy or likeable about paying to feed or take a selfie with a captive animal. These animals are denied everything that’s natural and important to them. They’re forced to spend their entire lives swimming in circles inside tiny tanks. Those who are confined to touch tanks are subjected to loud noises, potentially rowdy crowds, and stress when many people stick their hands into the tanks. These up-close encounters aren’t just harmful to the animals—they’re dangerous to patrons, too:

Some of these animals—such as dolphins—may look like they’re smiling at the camera with you, but that doesn’t mean that they’re actually happy. They don’t want to pose for your pictures. You’re hurting these animals—not helping them—by paying to touch them or to take photos or swim with them. But don’t worry—if you really want to help them, we have a way.

Say No to Animal Encounters and Yes to Seaside Sanctuaries

The only thing you’ll “encounter” at SeaWorld is cruelty. But you can help end these animals’ suffering—before it’s too late. In addition to boycotting the abusement park, click the button below to urge the company to send the captive orcas to seaside sanctuaries: