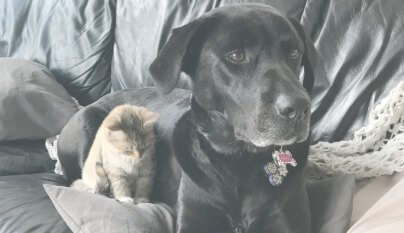 Another dog has died following a visit to PetSmart. As usual, the company is placing the blame elsewhere.

When Corey Dixon took his 4-year-old service dog, Aspen, to a Toronto PetSmart’s PetsHotel for a weeklong stay while he was out of town, he thought it would be a nice respite for her. Dixon suffers from a heart condition, and Aspen alerts people when he faints. She has saved his life “more than once,” he says. But when he returned to pick her up, he says that she was “extremely sick,” shaking and surrounded by vomit and saliva.

Aspen is on heavy IV fluids. She was completely healthy before we dropped her off at @PetSmart . She is now extremely sick. This is my service dog, she’s helped me so many times and now she’s very ill. I’m heart broken, this dog means the world to me. pic.twitter.com/V0ylVpJKHi

He rushed her to an emergency animal hospital, where she remained in intensive care for several days. “We know that she was sick in PetSmart’s care, we know that much. And that they didn’t bother to call the vet when she should have been seen a lot earlier,” Dixon said. “If she’d seen the vet when she started showing signs of being sick, maybe she would have had a better chance.”

Aspen’s condition worsened, and when she began struggling to breathe, her family made the painful decision to let her go.

It is heart breaking to say that Aspen has passed away. My heart is crushed. She was loved by many. The remaining gofundme money will be put towards her remaining vet bills as well as her funeral costs. We will always love you Aspen. Thank you for being there by my side. 😞💔 pic.twitter.com/eQJKizq6pk

PetSmart is apparently denying any culpability for Aspen’s death, saying in a media statement that its “initial findings indicate that [its] associates followed all policies and procedures” and that one veterinarian “reported the cause of death as a pre-existing autoimmune disease … completely unrelated to Aspen’s stay at PetSmart.” That’s not exactly surprising.

PETA’s most recent investigation of PetSmart revealed that animals being sold by the chain were kept in filthy conditions and that employees consistently refused to provide sick, injured, and dying animals with veterinary care in order to “keep costs down.” After PETA turned our findings over to police, authorities in Nashville, Tennessee, charged three PetSmart managers there with cruelty to animals. They all pleaded guilty, were sentenced to community service, and had to repay $16,156 to cover veterinary and care costs for animals who had been rescued from the store. Still, according to news sources, PetSmart said in a statement, “PetSmart stands by our Nashville associates.” The company added, “We continue to believe these associates have not committed any wrongdoing.”

Just as I expected.. Petsmarts going to try to cover their ass. Just as corporations do. A dog got sick in your care, she was a bouncy healthy pup going into your care. We’ve got the evidence we need and trust me. This is far from over. My service dog is now dead. pic.twitter.com/00JXz570qr

And Aspen is, unfortunately, one of many dogs and other animals who have become ill or died while or after being boarded or groomed at PetSmart.

Please, don’t buy animals from PetSmart or any pet store and don’t take your animals to be boarded or groomed there. And tell the company that until it stops selling animals, you won’t be shopping there.