Because I don’t say it often enough, do know that one of my favorite things about this site is the way your presence, whether active or lurking, quietly provides the encouragement I need every time I want to tackle a dish or recipe that daunts me. Like bagels. Or Lasagna Bolognese. Or Baked Alaska. Or Russian Honey Cake. But I’m not sure that any of these dishes have struck terror in my heart — laced with impending doom over inevitable failure — over a dish as much as this. 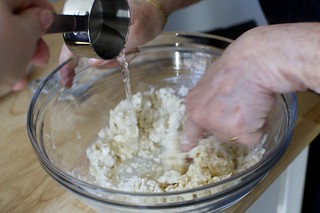 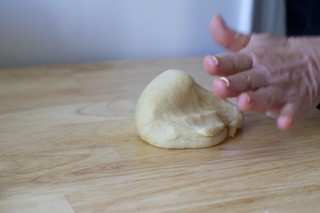 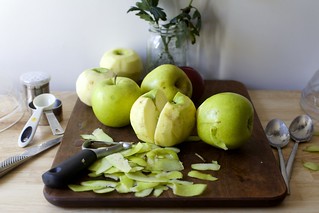 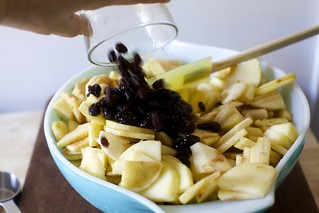 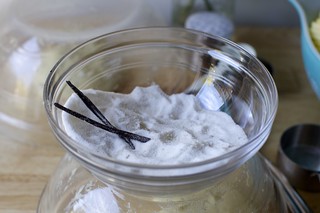 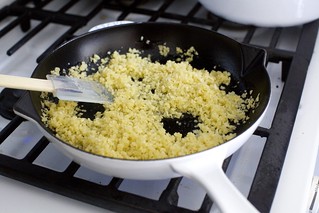 Let me rewind a little: I was lucky enough to preview some of the pages from Luisa Weiss’s new cookbook, Classic German Baking in June. It was around my birthday and my mother and I had gone to Cafe Sabarsky, one of my great New York City loves, for lunch. My mother’s parents were from Germany and although they didn’t leave under good circumstances, we both have a huge soft spot for the baked goods of the region. This book — filled with Sachertorte (glaze chocolate torte, which my kid left the book open to this morning, an unsubtle hint) and Mandelhörnchen (almond horns), Amerikaner (the original black-and-white cookie), Butterkuchen, Linzertorte, Bretzlen (soft pretzels) and miles of Christmas favorites — enveloped us with such an intense longing to run to the kitchen, bury ourselves in flour, butter, almonds and yeast and not come out for one to two years, it was clear it would be impossible to choose what to bake first. 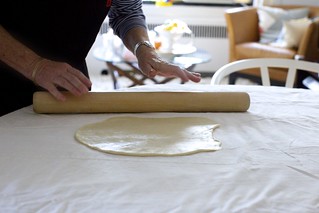 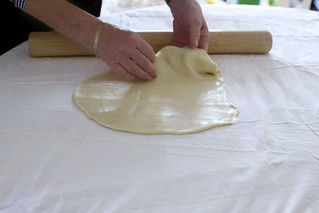 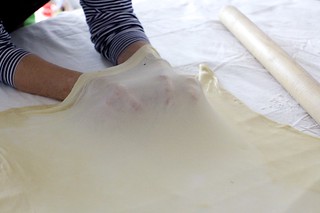 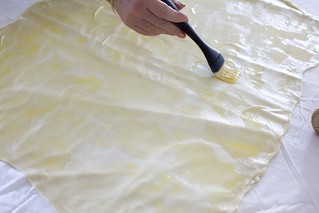 But then I saw the three-page spread for apfelstrudel, and the fright took hold. I’ve watched videos of people making apple strudel before — the massive tables of dough stretched film-thin with a family of hands, nobody allowed to stop until a newspaper could be read through it, and concluded, as any sane person would, that it is best left to the pros. But as I read through the recipe — damn you, Luisa, and your eloquent, reassuring writing — and it was just apples and flour and oil and butter and breadcrumbs and raisins and absolutely zero voodoo and… 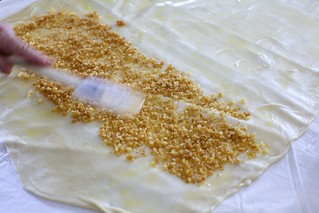 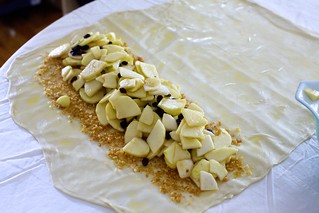 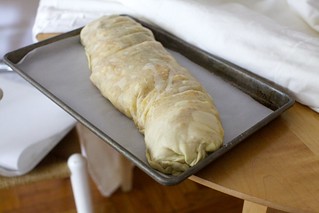 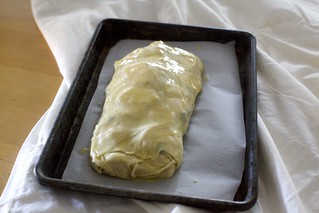 And this Tuesday was finally Strudel Day. I called my mother in for support, as one does when things get scary. We made the ridiculously simple, soft dough. We peeled and sliced apples, sauteed some breadcrumbs in butter, soaked some lucky raisins in dark rum my cool mom brought us from Cuba, and covered the table in a sheet and took deep breaths took deep breaths and… it was so easy. Rolling and stretching this dough to the prescribed size was about the easiest thing I’ve ever done. [Seriously, getting my son to put on his shoes to go to school every morning requires thrice the effort and time.] From the oven, it looked and tasted like the amazing strudel we had in Vienna a lifetime ago and, look, are you feeling a little stressed out right now? Is Tuesday’s possible outcome giving you a steady tremor of dread? Should this fall’s archives be any indication, I believe sublimating existential stress in massive baking projects that provide deafening distractions is the happiest way to proceed. This one ends in a delicate flaky shell of buttery pastry wrapped around vanilla, cinnamon, lemon and rum-kissed apples and raisins, with or without a dollop of whipped cream or vanilla ice cream melting down the sides, and unequivocally gets my vote. 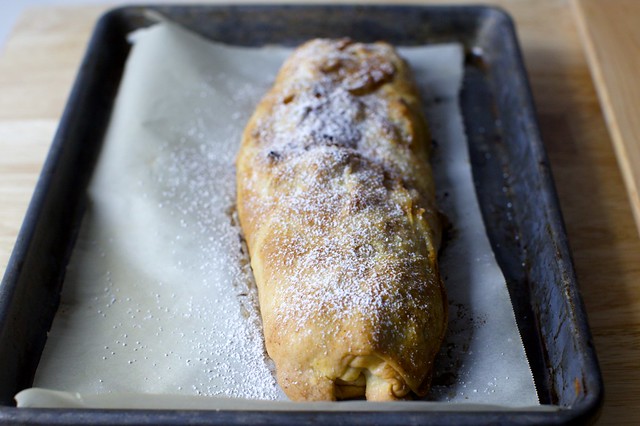 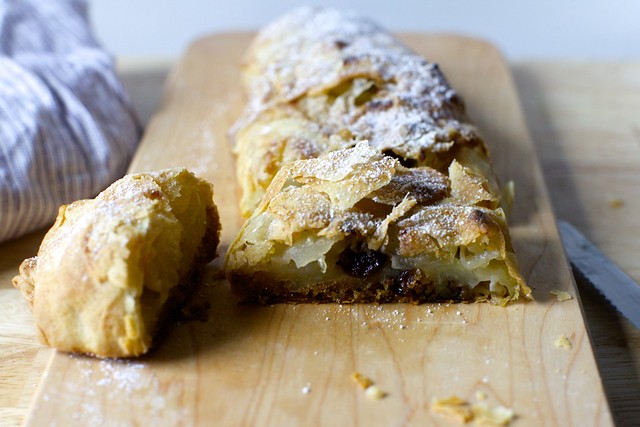 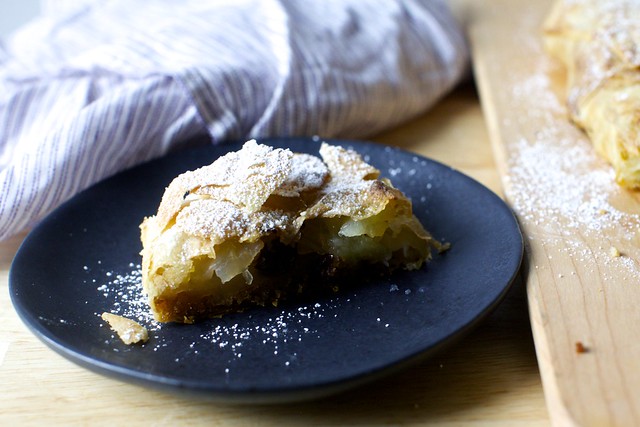 Snapchat: I tested the recipe one more time yesterday and shared (and even chatted about) it on Snapchat (@smittenkitchen). The clips will only be up for a couple more hours, and I hope you get a chance to check them out. Let me know if you like these off-the-cuff recipe demos (and the ones in previous weeks, usually recipes from the archives); if so, I’d love to do more. I might even comb my hair first next time. 🙂

This recipe is just barely adapted from Luisa Weiss’s incredible Classic German Baking. You could make it to the letter and be very happy. I ended up tweaking it just a little — I kept finding I had too much apple filling and not enough crumbs (likely due to the fact that I’m recommending panko over making your own), so I’ve nudged both accordingly. About the apple filling, I found when I used less apples, it was easier to get a thin log (as you see up top, which looks more traditional to me) and it stayed more crisp than the flatter, wider ones I’d made with the recommended weight of apple filling.

I also found the halved size to be more suited to our needs, and a little less scary to handle. It bakes in a few minutes less time. The instructions below are for one full-sized strudel, however. If halving, you’ll want to stretch each half the dough into a 12-by-16-inch rectangle instead.

If yours leaks a little, don’t fret. Our first two did, my second two did not, i.e. it gets easier with practice. If it softens when it cools, you can re-crisp it in the oven, but most people will tell you it’s really at its best the first day.

Re, breadcrumbs: Weiss’s recipe calls for 1/2 cup and they clock in at 60 grams. I find panko (Japanese-style breadcrumbs) to be an almost exact match for white bread that I’ve dried and ground, and use it instead. But it’s much lighter (less than 30 grams per 1/2 cup) which probably explains why I felt I needed more to both absorb the butter and hold the apples in place. If you’re not using panko breadcrumbs, you might find the original measurement better suits your needs.

Finally, vanilla sugar (vanillezucker)! Weiss notes that vanilla extract is unheard of in most of Europe, the vanilla sugar reigns supreme. [My mother informs me that my late grandmother, who almost never baked, still always had a jar of this around.] However, the commercial stuff is often artificial. If you don’t have a vanilla bean, you can add one teaspoon of vanilla extract to the apple filling below. However, if you’d like to make some, you’re in for a treat. Split one vanilla bean open and scrape seeds into 2 cups (400 grams) of granulated sugar. Use your fingertips to disperse it throughout. Stick the empty bean pod in the sugar too; there’s plenty of flavor left to be had. You’ll need less than half for this recipe but I promise you’ll enjoy having the rest around. It also makes wonderful gifts in a pretty glass jar.

Prepare the raisins: The day before, combine the raisins and the rum in a small bowl and cover; set aside for 24 hours. However, should you be reading this and want to make it right now, I found microwaving the two together for 10 to 15 seconds and setting them aside until you’re ready to mix the filling allowed them to absorb almost as well.

Make the dough: The day of, combine the flour and salt in a medium bowl. Add the oil and water and mix with a spoon or your index finger until a rough dough forms. Turn it out onto a very lightly floured counter and knead for 10 minutes. It sounds like it will be forever, but set a timer and chat with a friend, it goes quickly. After 10 minutes, the dough should be soft and silky to the tough. Form it into a ball, place it on the counter and upend the mixing bowl over it. Set aside for 30 minutes.

Meanwhile, prepare the apples: Peel, halve, core and slice thin in one direction, then halve the slices crosswise, creating thin squarish rectangles of apples. Place them in a large bowl and toss with lemon juice, sugar and cinnamon, if using. Add the raisins and any rum left in the bowl.

Prepare the breadcrumbs: In a small skillet over medium-low heat, melt 3 tablespoons butter and add the breadcrumbs, sugar and salt. Stir to coat and cook, stirring frequently as they can burn quickly, until crumbs are an even golden brown and very fragrant. Don’t let them burn. Scrape into a dish (or they’ll keep cooking in the pan) and set aside.

Melt the remaining 5 tablespoons butter in a small dish.

Roll out your dough (these directions are for a full-sized strudel): Cover your work surface with a cleaning linen towel or sheet that’s at least 24-by-32 inches. The long side should be horizontal. Sprinkle the cloth lightly with flour. Place the dough in the middle, sprinkle it very lightly with flour and roll in both directions until it’s about 10-by-13 inches, or about as far as the rolling pin can take it. Make sure the dough hasn’t stuck to the cloth; reflour if it has. Now the stretching begins! Ball your hands to loose fists, put them under the rolled-out dough and gently start stretching the dough using the back of your hands. Alternate with pulling the dough gently with your fingers to continue stretching it, stretching the edges thin too. This is all much easier than it sounds, but be patient. If holes form, pinch the dough back together. Continue stretching until the dough is about 16-by-24 inches.

Assemble strudel: Brush evenly with about half the melted butter. On the right side of the rectangle, a few inches from the end, spread the breadcrumbs top to bottom in a thick line, leaving a little more than an inch margin at the top and bottom of the strip. Scoop the apples with a slotted spoon, leaving any accumulated juices in the bowl, and pile them over the crumbs. Gently pull the top and bottom edges of the dough over the apple mixture. Pull the right edge of the dough up and over the filling as far as it will go without tearing. Working carefully, use the towel to roll up the strudel all the way. Place the parchment paper from your baking sheet at the edge of the roll and roll the strudel onto it. Ideally, it should be breadcrumb side-down on the parchment, you can roll it again if it’s not. Use the parchment like a sling to gently place the strudel on the baking sheet.

Brush the strudel generously all over with some of the remaining butter. Bake for 15 minutes, then brush again and return to the oven in a rotated position. Repeat this once, baking a total of 45 minutes. (Half-size strudels seem to bake 5 or so minutes faster.) The finished strudel should be crisp to the touch and a deep golden brown.

Remove the baking sheet from the oven and let cool on a rack for at least 20 minutes before serving. Dust with confectioners’ sugar and slice into pieces to serve.

Strudel is best the day it is made, but it keeps for 1 to 2 days at room temperature. I’ve also read that you can freeze it (am trying this as we speak, will give more notes once it defrosts). Before serving, you can crisp up leftover strudel in a 350 degree F (180 degree C) oven.