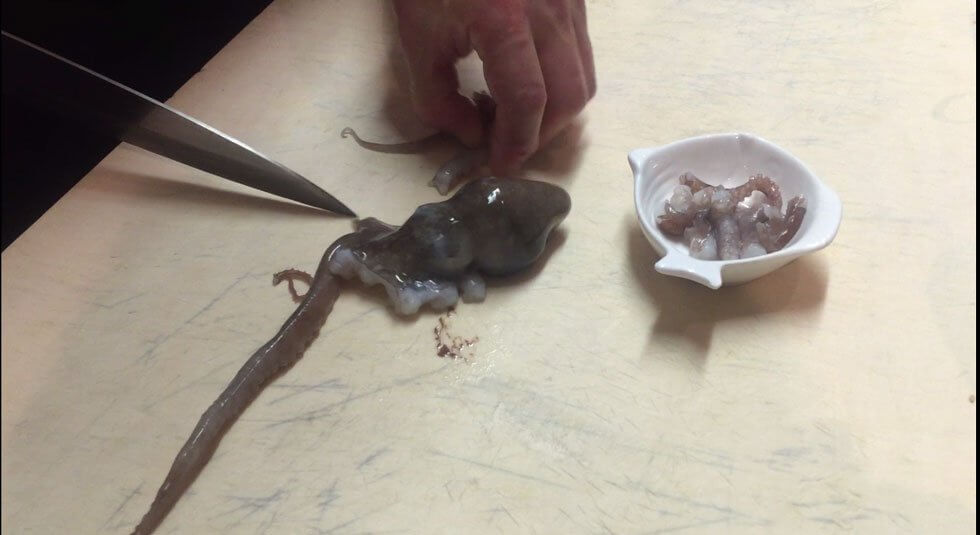 On the heels of our groundbreaking investigationinto restaurants in New York City and Los Angeles that serve live animals, PETA has revealed that live octopuses and other sea animals are also being butchered and served to diners in Canadian restaurants.

Octopuses Pinned Down, Hacked Up, and Served Writhing

In February 2017, a PETA observer went insideMarado Sushi, where she watched as an octopus was pulled from a tank, tossed onto a cutting board, pinned down, and mutilated. The chef started at the tip of each arm and leg and worked his way up, chopping off section after section, before finally dicing up the octopus’s head. The limbs were served still writhing, in a dish called “sannakji.”

Neighboring Gal’s Sushi is perhaps Toronto’s most notorious restaurant for live-animal dishes. In June, PETA eyewitnesses returned to Toronto and watched as a chef whisked an octopus from a tank straight into the kitchen. Moments later, a plate of squirming, severed tentacles was served to patrons.

When it comes to experiencing pain, the science is clear: As cephalopod expert Dr. Jennifer Mather explains, octopuses “can anticipate a painful, difficult, stressful situation—they can remember it. There is absolutely no doubt that they feel pain.” Octopuses are so intelligent that they’re often referred to as “primates of the sea,” and like orangutans and chimpanzees, they use tools. They’ve been observed carrying coconut shells to assemble later as housing and stockpiling rocks to fix gaps in their dens. In captivity, octopuses have been known to open childproof jars, play with Mr. Potato Head dolls and Legos, deliberately short-circuit bright lights, and make daring escapes after determining that no one was watching.

Shrimp and Lobsters Torn Apart, Served Next to Their Severed Tails

Marado Sushi and Gal’s Sushi are just two of a handful of restaurants in Toronto that mutilate and serve live animals. Other restaurants “prepare” live shrimp and lobsters by cutting their tails off and serving them “sashimi style” right next to their mutilated but still-living bodies, for the patrons’ amusement.

Like octopuses, crustaceans such as shrimp, lobsters, and others experience pain. According to the leading expert on crustacean pain, Dr. Robert Elwood, crustaceans “show a high motivation to escape noxious stimuli, respond in ways that are conclusively not mere reflexes, have strong physiological stress responses, show symptoms of anxiety after negative treatments, and have long-term memory of negative experiences. [Crustaceans] fulfil the criteria of pain.”

You Can Help Stop This!

PETA filed a complaint with the Ontario SPCA, which agreed that octopuses are protected by cruelty-to-animals legislation and promptly informed Marado Sushi of the law. This is perhaps the first time that cruelty-to-animals legislation has ever been used to protect octopuses in North American restaurants and is a significant benchmark in the protection of invertebrates. However, Marado Sushi continues to serve sannakji by chopping the heads off live octopuses before dicing up their limbs—which likely doesn’t destroy their brains and organs and could result in continued suffering—and other Toronto-area restaurants continue to serve sannakji. We need your help to convince Marado Sushi, Gal’s Sushi, and others that live animals do not belong on menus or plates.