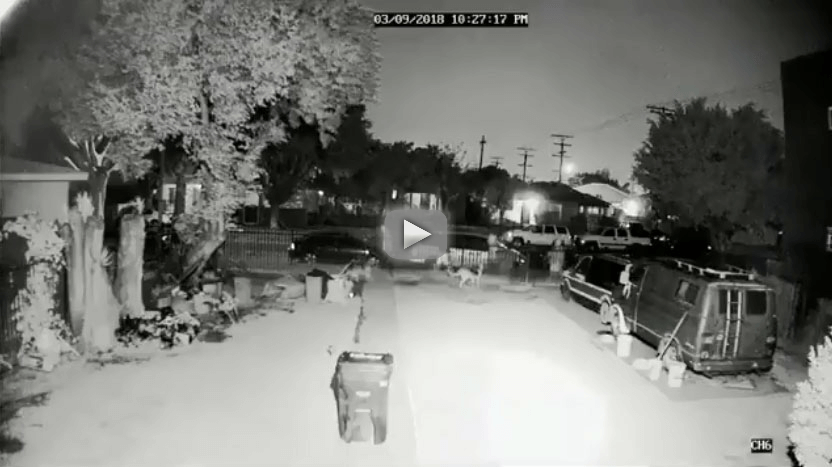 Home-surveillance video footage, which can be seen below—reportedly taken at approximately 10:30 p.m. on the evening of March 9—shows four men walking past a fenced-in home in the 900 block of E. 91st Street in Avalon Gardens as two dogs bark at them from behind a fence. The man in the front of the group appears to stop and shoot one of the dogs at point-blank range, killing him.

Captured on video. Please RT. #LAPD Detectives are seeking your help in identifying the suspects responsible for killing a dog. For additional ▶️https://t.co/Q2dXOPZpnI. If you have any info, email the Animal Cruelty Task Force at [email protected]@LACrimeStopper1pic.twitter.com/qFfhwPS7X0

The Los Angeles Police Department’s (LAPD) Animal Cruelty Task Force is investigating but has yet to make any arrests in connection with the killing, prompting PETA to offer a reward of up to $5,000 for information leading to the arrest and conviction on cruelty-to-animals charges of the person responsible for this crime. On Friday, the LAPD shared news of PETA’s offer on Twitter:

UPDATE: @peta is offering a reward of up to $5,000 for information leading to the arrest and conviction of the person responsible for this crime https://t.co/KvAA8ryXKh

This dog was in his own yard when he was shot and killed by an impulsive, dangerous person. PETA is urging anyone with information about this case to come forward immediately so that the culprit can be apprehended and forced to face the repercussions of his despicable actions.

Anyone with information about this case should call Crime Stoppers at 1-800-222-TIPS or e-mail the LAPD Animal Cruelty Task Force at [email protected].

PETA cautions families to keep dogs indoors with the family, where they’re safe, and never leave them unattended when they’re outdoors, as they can be hurt by cruel humans and attacked by other animals. Nothing can bring back this cherished animal companion, but we can take steps to prevent similar tragedies from befalling others. Click the button below to learn more: