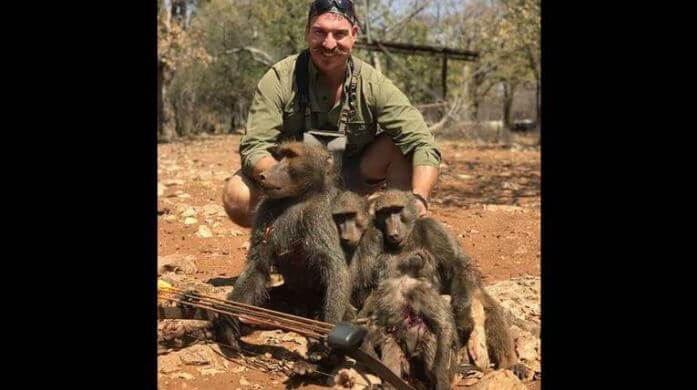 Idaho Fish and Game Commissioner Blake Fischer is bragging after killing an entire family of baboons for fun. Pictures that he sent to more than 100 friends and coworkers show him smiling while holding up the dead bodies of what he described as a “family of baboons,” seemingly an adult pair with an adolescent and baby. The mother’s arms are wrapped around her baby’s dead body.

Fischer proudly sent out many other pictures from his trophy hunting trip to Namibia with his wife, showing that the pair gunned down at least 14 animals, including a leopard, a giraffe, an impala, a sable antelope, a waterbuck, a kudu, a warthog, a gemsbok, and an eland.

Idaho Fish & Game Commissioner Blake Fischer went to Namibia, murdered at least 14 animals, including an entire family of baboons, a giraffe & a leopard, then boasted about it online with pics (graphic). Several former Commissioners demand his resignation https://t.co/ePrnhBrbNw pic.twitter.com/Iw4LoPB1X4

Several Idaho officials are calling for Fischer to resign or be released from his position amid the firestorm of public outrage. But the avid trophy hunter refuses to admit any wrongdoing.

“In every picture, we try to pose the animals in a natural position, wipe the blood off the mouth, place the rifle or bow over the bullet hole. … These are normal hunting photos. You shoot an animal, you take a picture of it.”

But as everyone knows, real men shoot animals only by taking pictures of them.

Psychopathic killers should not be placed in charge of threatened, endangered, or other wild animal species. Please join PETA in calling for Fischer to be relieved of his position by contacting the Idaho Department of Fish and Game at 208-334-3700 or posting a comment on the department’s Facebook page.