Visitors go to Petra, Jordan, to marvel at its ancient monuments and temples, but the “Lost City” has a dark and ugly side. Here’s what to look out for and what you can do about it: 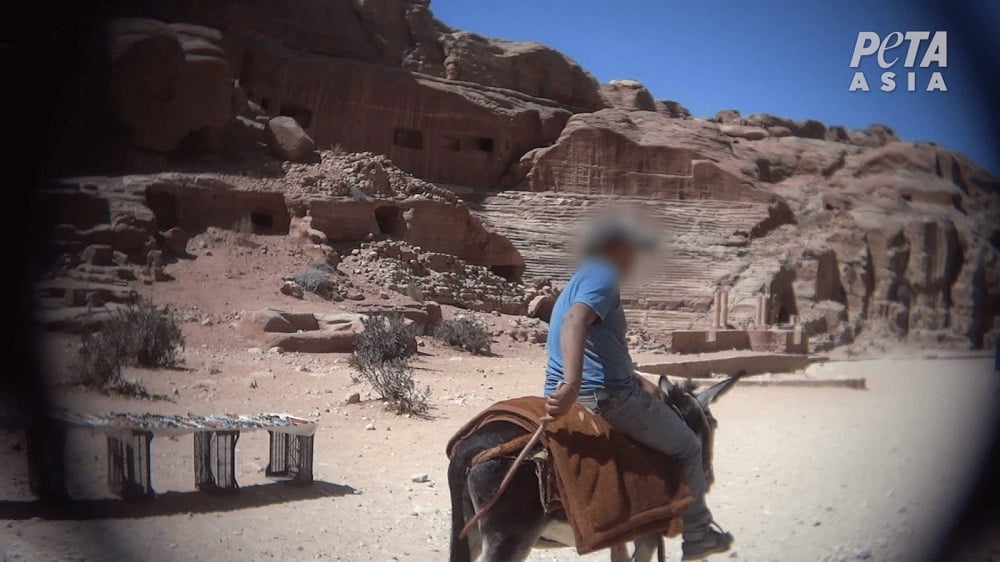 More than 1,300 horses, donkeys, mules, and camels are forced to carry tourists or pull carriages in the city all day, every day. In plain sight, handlers beat animals with plastic pipes, ropes, chains, and whips to keep them moving.

2. Animals are forced to haul tourists on a six-mile trek in the sweltering heat, during which they’re deprived of water and shade. They repeat the journey over and over again until nightfall. 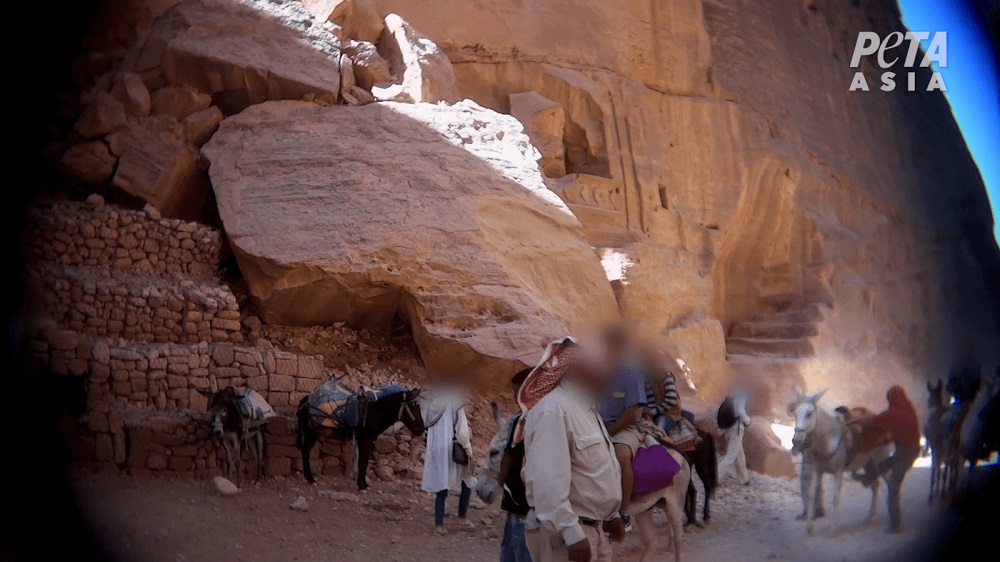 Donkeys are forced to carry people up and down the 900 eroded steps to the city’s iconic monastery. If they resist or falter, beatings intensify. In a PETA Asia eyewitness video, one handler viciously kicks a donkey in the stomach when the animal resists carrying more tourists after having just finished a tour.

3. Many of the animals have wounds caused by the chains and ropes that are tied tightly around them. 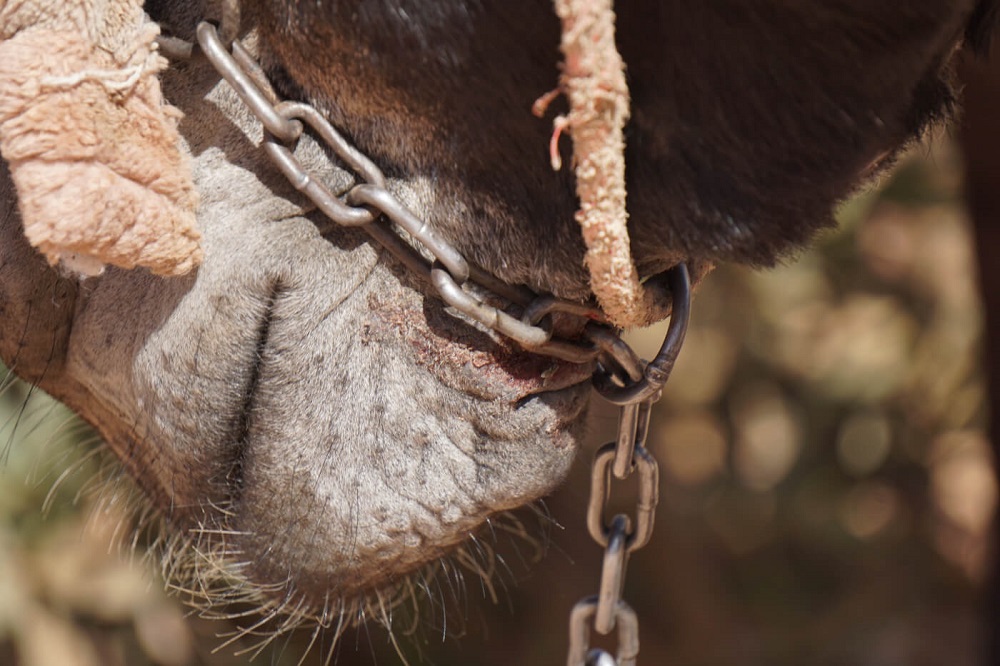 A PETA Asia eyewitness saw camels being forced to work, even though they had open fly-infested wounds caused by ill-fitting bridles. Donkeys were seen with chains around their necks stained with blood from their injuries. 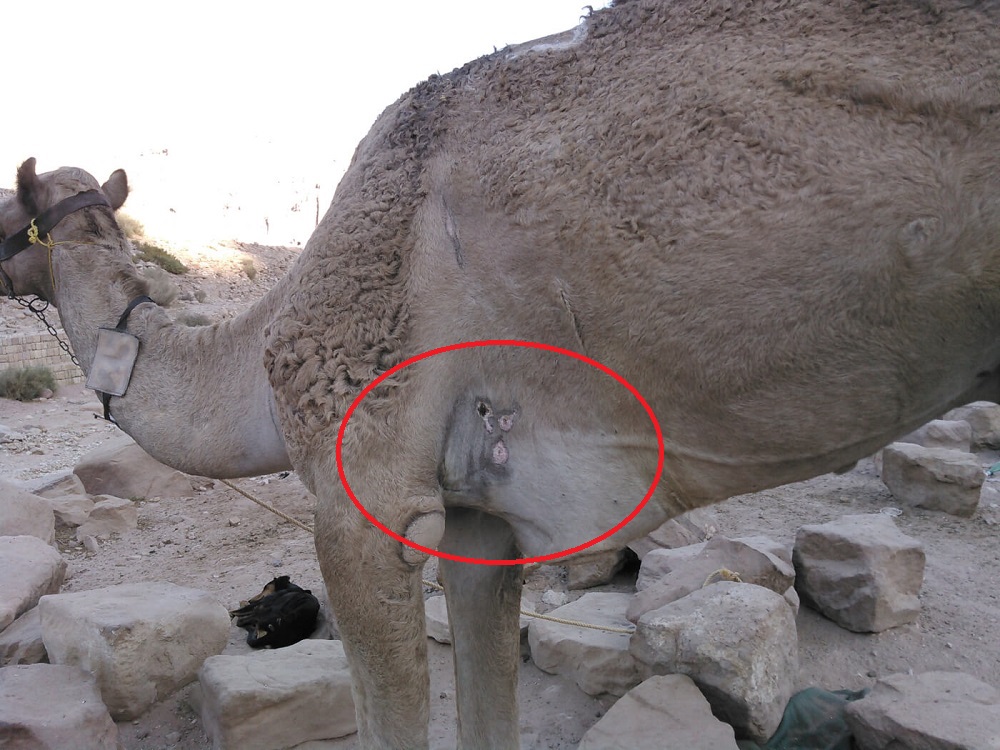 Tourists are directed by the Petra Development and Tourism Region Authority to report cruelty to animals by sending a message to an e-mail address that doesn’t work.

In a recent article in the Jordan Times, the Ministry of Tourism claims that cruelty to animals is taken seriously, even quoting Jordan’s penal law. But nothing is being done.  Nothing at all.

5. Officials in Jordan could end this suffering right now, but they don’t, and won’t, unless pushed.

The country’s Ministry of Tourism and Antiquities must replace these abused animals with environmentally-friendly, cruelty-free transportation. Much like in other UNESCO sites, where animals are not abused, tourists could also then appreciate Petra’s rich history without supporting cruelty to animals, which ruins a trip and blights the country’s reputation.

PETA Asia has written to hundreds of travel agencies and hotels in the area appealing for their help. Their response has been clear: They’re not going to promote Petra until animals are replaced with transportation that does not harm animals.

No animal willingly lugs humans up 900 steps and for miles in blistering heat—they do so only because they’re afraid of being hurt if they don’t. . These thinking, feeling beings—who experience emotions, have personalities, and cherish their lives, just as we do—must be freed from this suffering. Stand with PETA in asking Jordan’s Ministry of Tourism and Antiquities to ban animals from the historical site.