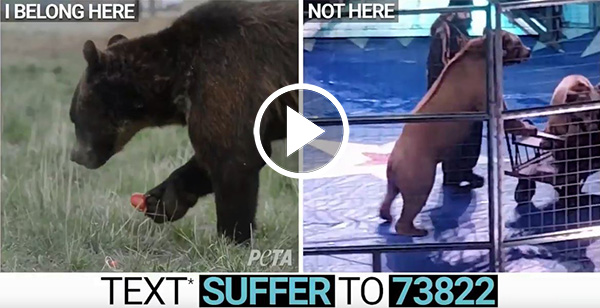 The Rosaire family has been forcing animals to perform for about 10 generations, and an end to the cruel acts is long overdue (by more than a century…). We need your help to free the bears from muzzles, travel trailers, and gawking strangers and send them to reputable sanctuaries.

Their wild counterparts typically spend their days digging, climbing, running, and swimming across vast home ranges. But an expert reviewed a video of the Rosaires’ recent show at the Anah Shrine Circus and observed that bears were almost constantly slapped, poked, and jabbed. They were coerced to make them walk and sit like humans, push carts, and climb ladders—all of which can lead to muscle or joint pain, injury, and chronic psychological distress, according to the expert.

During the performance, one bear was even seen urinating twice and then licking his own urine off the floor. According to the expert, this urination was likely a severe distress response to being forced to perform these uncomfortable acts. Drinking urine is an abnormal type of behavior, which could be caused by an underlying physiological concern such as nutritional deficiencies or severe dehydration&mdash;or it could be a coping mechanism as a result of psychological suffering.

Not surprisingly, Rosaire’s Bears has also been cited by the U.S. Department of Agriculture for failing to meet even the minimum standards of animal care. Citations include for feeding bears mainly bread—whereas in the wild they would eat a wide variety of foods, such as grass, berries, insects, and fish—as well as housing them in a rusty and dilapidated steel shipping container. It was also cited after a bear reportedly died when an older bear dug under the fence and bit him, fatally puncturing his lung.