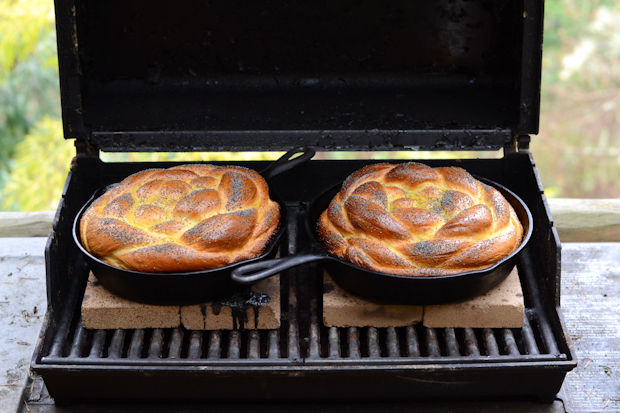 One of the slickest tricks we know is baking bread on the grill.

Once you get to know your grill, it’s easy-like baking your favorite recipe in the oven.

We can think of all kinds of reasons to use the grill. You can enjoy fresh baked bread while camping, or at the cabin, or at the next family reunion. Sometimes, it’s just nice to get out of the kitchen, enjoy the spring air, and bake outside. (Watch the neighbors turn their noses upwind when the smell of fresh baked bread wafts over the fence.) And in the summertime, you don’t have to heat up the kitchen to bake. Finally, if there is ever an extended emergency when the power is off, you may have the only fresh bread in town.

You can bake nearly anything with a covered grill. (If your grill doesn’t have a cover, improvise with a large inverted pot.) The heat rises and circulates in the covered area just as it does in your oven. The heat source can be charcoal, gas, or even wood. We prefer gas because it is easier to control and does not impart a smoked taste to the bread. Since it is hottest near the flames, elevate the bread even if you have to improvise. In our grill, there is a secondary shelf for baking potatoes and such.

For this demonstration, we used Old-Fashioned White Bread mixes though any mix or recipe will do. We mixed according to package directions. After it had risen, we formed one batch into oval country loaves, one into hamburger buns, and another into dinner rolls.

The trick to grilling bread perfectly is controlling temperature and time. If your grill comes equipped with a thermometer, you’ve got it made (though outside temperatures and winds may impact how well your grill retains heat). If you have a thermometer, just heat to the temperature designated on the package or in the recipe. If not, guess. After a few loaves you’ll have it perfect and we bet that the first batch off the grill will be just fine.

Rolls and buns will probably bake in 15 to 20 minutes and loaves will take 20 to 30 minutes depending on size and temperature. An occasional peek to see how your bread is doing as it nears completion is okay.

We made twelve giant-sized hamburger buns, just the ticket for that quarter-pounder. Form the buns as you would dinner rolls then press them flat several times until they look like those in the picture to the left. (The dusting that you can see on the pan is cornmeal.) Cover and let rise.

Just before baking, we washed the buns with an egg white wash (one egg white plus one tablespoon of water). We then sprinkled them with sesame seeds. On our grill, we baked them with the heat turned about two-thirds open for about 18 minutes.

We made two country style loaves from one mix. If you look closely you’ll see that we forgot to slash the tops to release the steam and consequently ended up with a split on the side of the loaf. Don’t do as we did-score two or three quarter-inch deep slashes on the top of the loaf just as you begin baking.

Here are a few more hints to help you along the way:

o Bake the bread before the burgers. The bread can cool while you cook the rest of the food. Burning grease in the bottom of the grill makes the temperature harder to control and the soot can stain the bread.

o If you are letting your bread rise outside where the temperature may be less than indoors or where breezes may swirl around the bread, consider using a large food-grade plastic bag as a greenhouse. Simply slip the bread dough–pan and all–inside the bag, inflate it slightly, and close it. If the day is cool, set the bag and the bread in a sunny warm place to capture a little solar energy.

o Grills tend to not circulate the hot air as well as ovens. To keep the bottom of the bread from burning, place one pan beneath the other and a wire rack between the pans to create space for insulation.

o If your bread is baking faster on one side than the other, turn the pan 180 degrees part way through the baking time.

o The tendency is to burn the bottom of the bread. Place the bread as far away from the flames as you can even if it means elevating the bread.

We hope that you have fun baking bread outside this summer. We do know that you will be the envy of the neighborhood, campground, or RV park.