As first reported by CTV News, a new exposé—created from footage captured by activist Jeff Rigear and others and narrated by actor Kat Graham—reveals the suffering and death of hens on three egg farms in Abbotsford, British Columbia. The activists found hundreds of dead birds—some rotting in cages alongside the living—and dozens of others barely clinging to life and even buried in manure pits below the enclosures.

The activists’ findings prompted the British Columbia Society for the Prevention of Cruelty to Animals to raid one of the farms. An investigation is underway. But billions (yes, billions) of other hens in conditions like these still need your help.

What follows is a look behind the closed warehouse doors of egg factory farms as well as tips for helping to end this suffering.

Left for Dead Amid Piles of Feces

Waste fell through the cage flooring into pits and collected in piles up to 5 feet high, which teemed with maggots and other insects. Amid the excrement, the eyewitnesses found the bodies of more than 200 hens, who had evidently fallen while being moved in or out of their cages and were just left to die, likely from dehydration or starvation. Many were buried alive in the manure.

Dozens of birds were still alive in the pits. Abandoned with no food, water, care, or hope of escape, many were emaciated and stuck, even up to their necks, in a slurry of feces. They were rescued and rushed to a veterinarian.

Veterinary expert Dr. Katherine van Ekert noted that these hens were “suffering from extreme illness: They were so incapacitated that they did not struggle to move away when handled—a natural flight response. Their eyes were also sunken and their eyelids closed—signs indicative of severe depression and advanced disease states in chickens.” 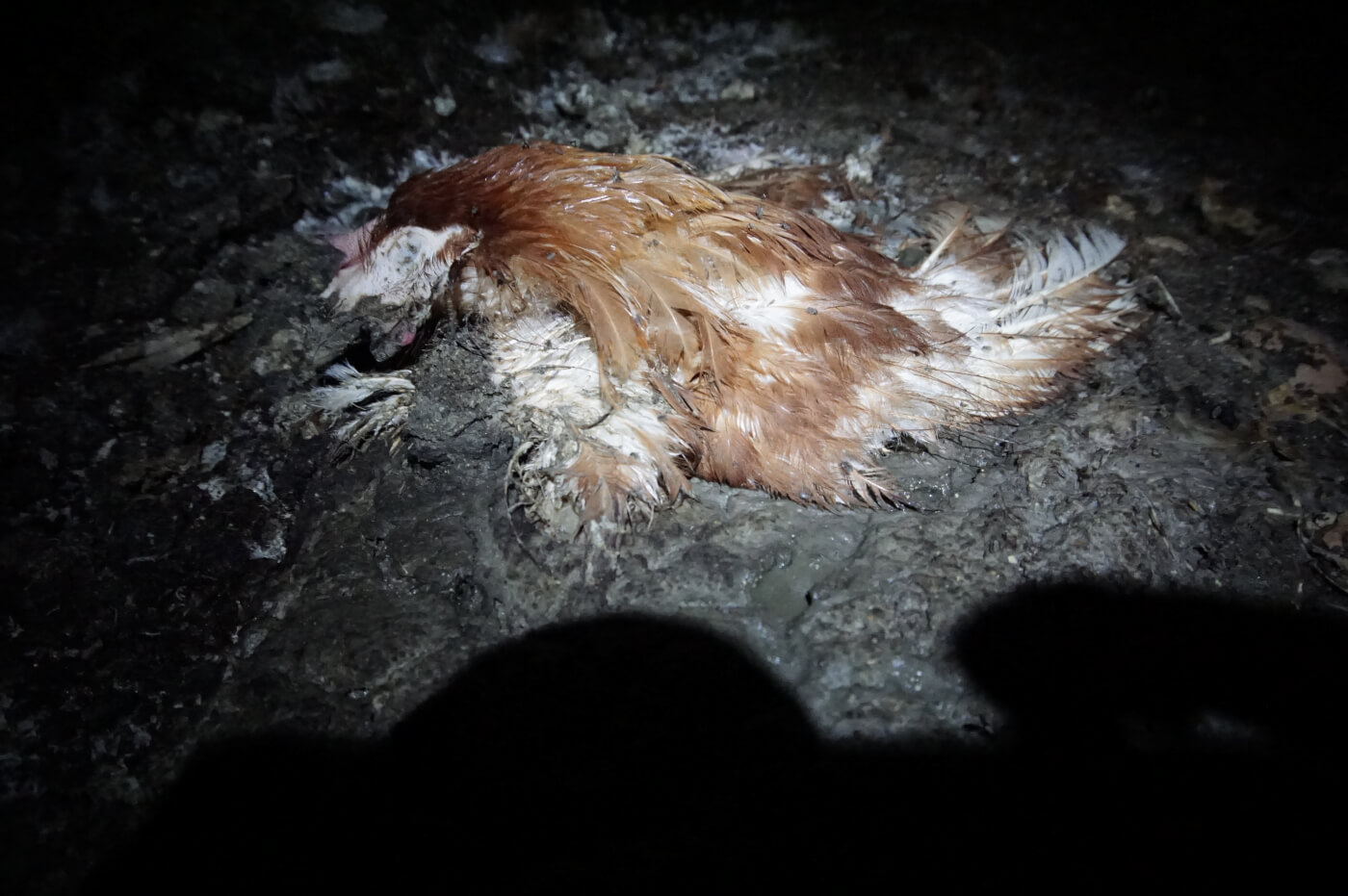 Waste fell through the cage floors into manure pits. Amid piles of feces up to 5 feet tall, the eyewitnesses found over 200 living and dead hens. Many were trapped in the waste. 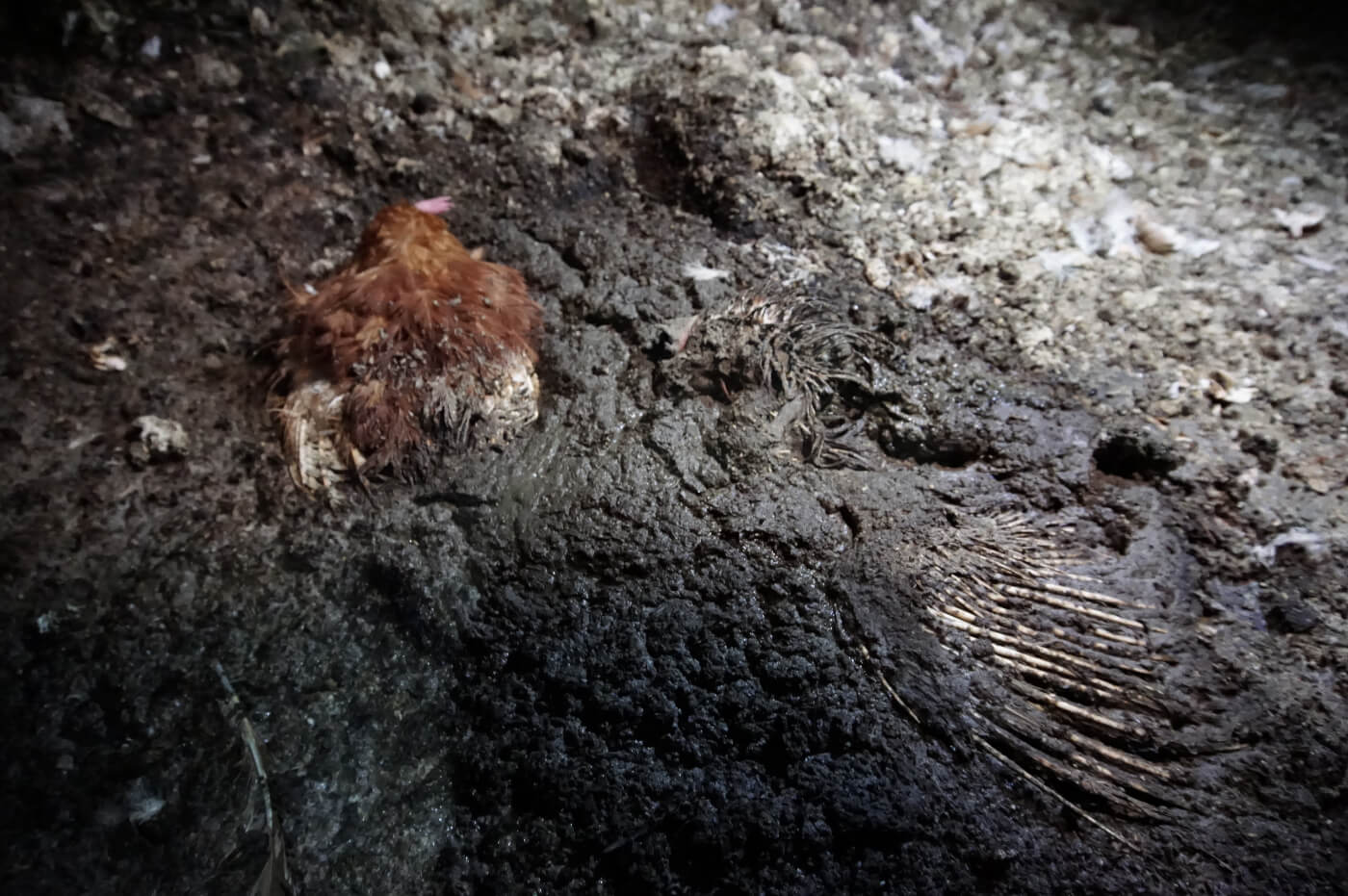 A live hen (left) is stuck just inches from a dead one. 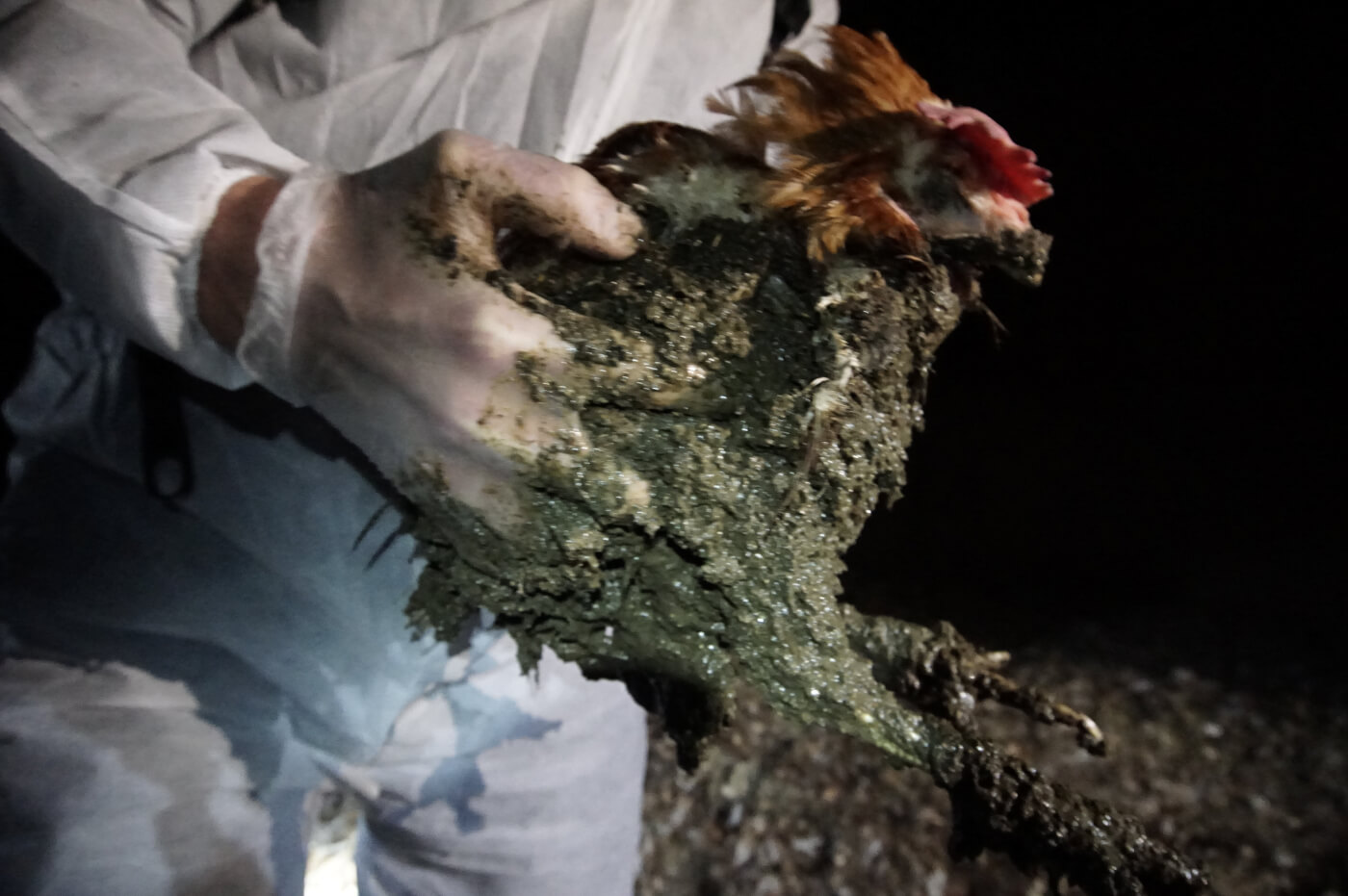 The eyewitnesses rescued live hens from manure pits, including this one, who was buried in feces up to her neck.

Trapped and Stressed in Cramped Cages

In the cages above the pits, hens fared little better. Curious, intelligent, and highly social, they were deprived of everything that is natural and important to them. They were packed so closely together that they couldn’t even spread their wings, let alone establish a social order. Countless birds suffered from extensive feather loss, which is often the result of stress-induced fighting and self-mutilation. 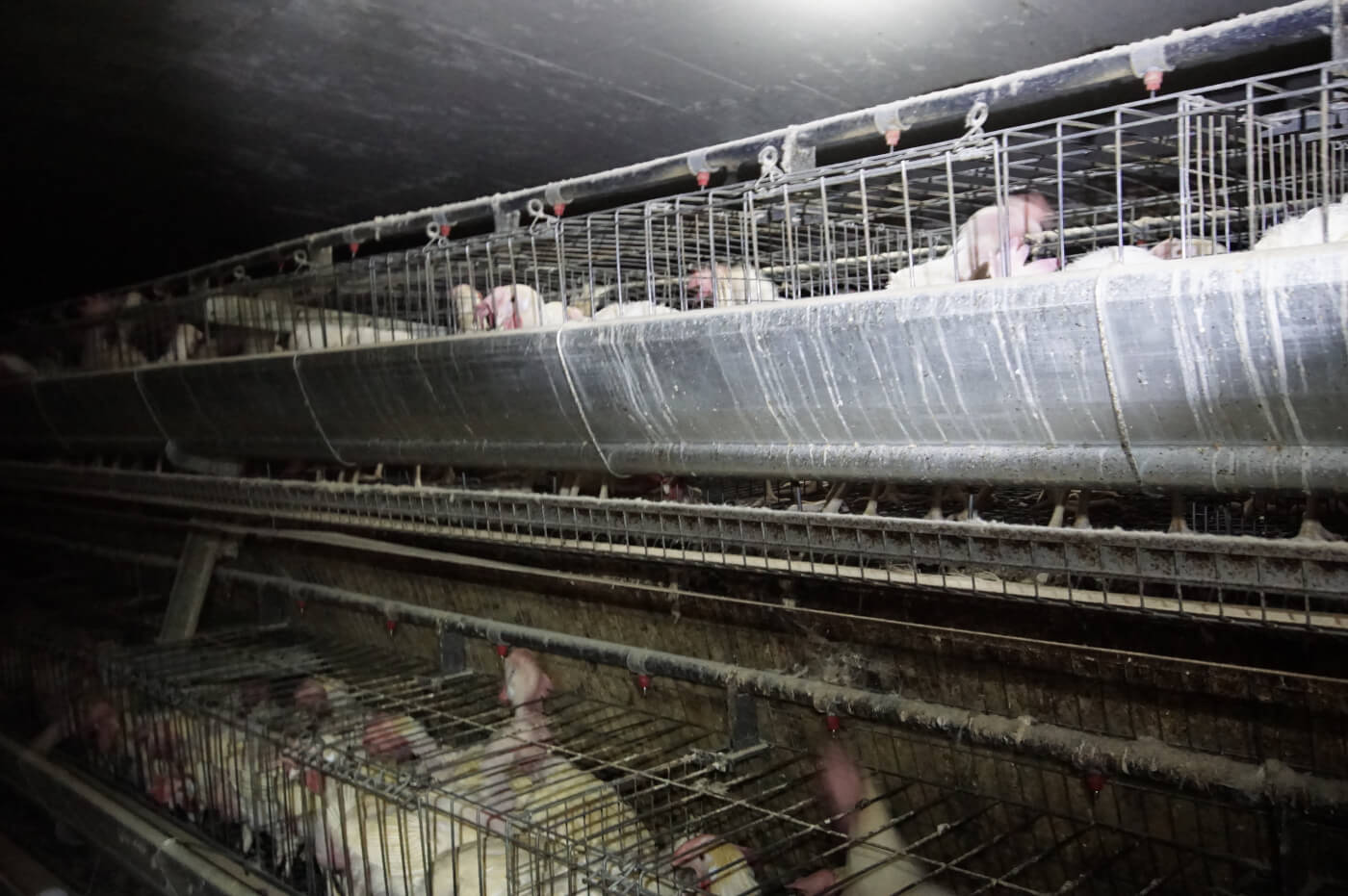 Eyewitnesses found hens housed in row upon row of wire-floored battery cages, with little space and no stimulation. This is standard practice for the egg industry in Canada. 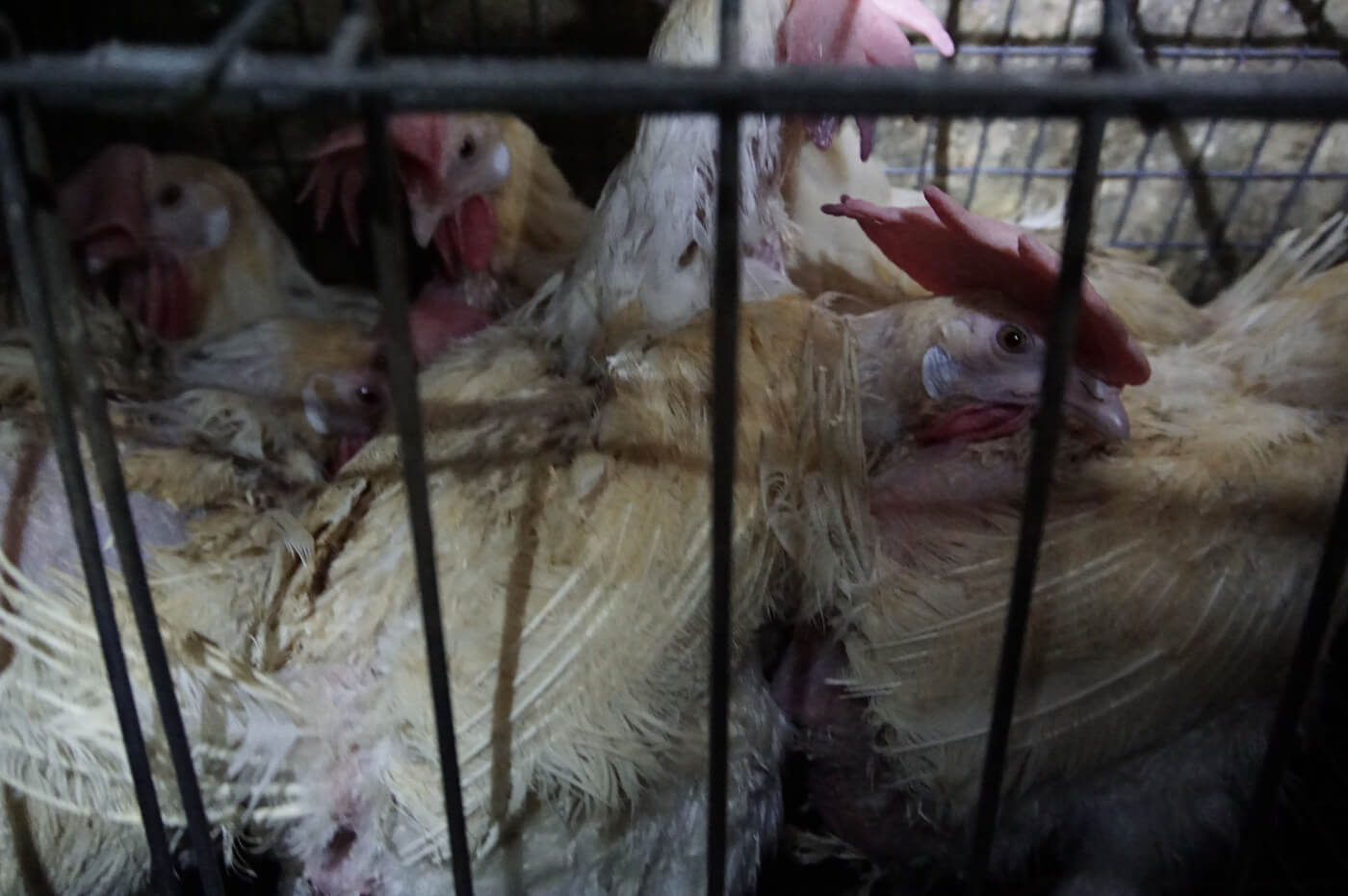 Many hens were missing feathers. Feather loss can be caused by stress, illness, or fighting, which often occurs when chickens are unable to establish a social order because of cramped, crowded living conditions.

Caged With the Dead

Many hens had died and begun to rot inside the cages. The survivors were forced to live alongside their rotting cagemates for days on end. According to veterinary expert Dr. Christine Capaldo, “In my professional opinion, forcing live hens to be confined with decaying bodies would cause extreme psychological trauma, distress, and suffering; exposes live birds to disease, bacterial contamination, and harsh odors; and constitutes abuse and neglect.” 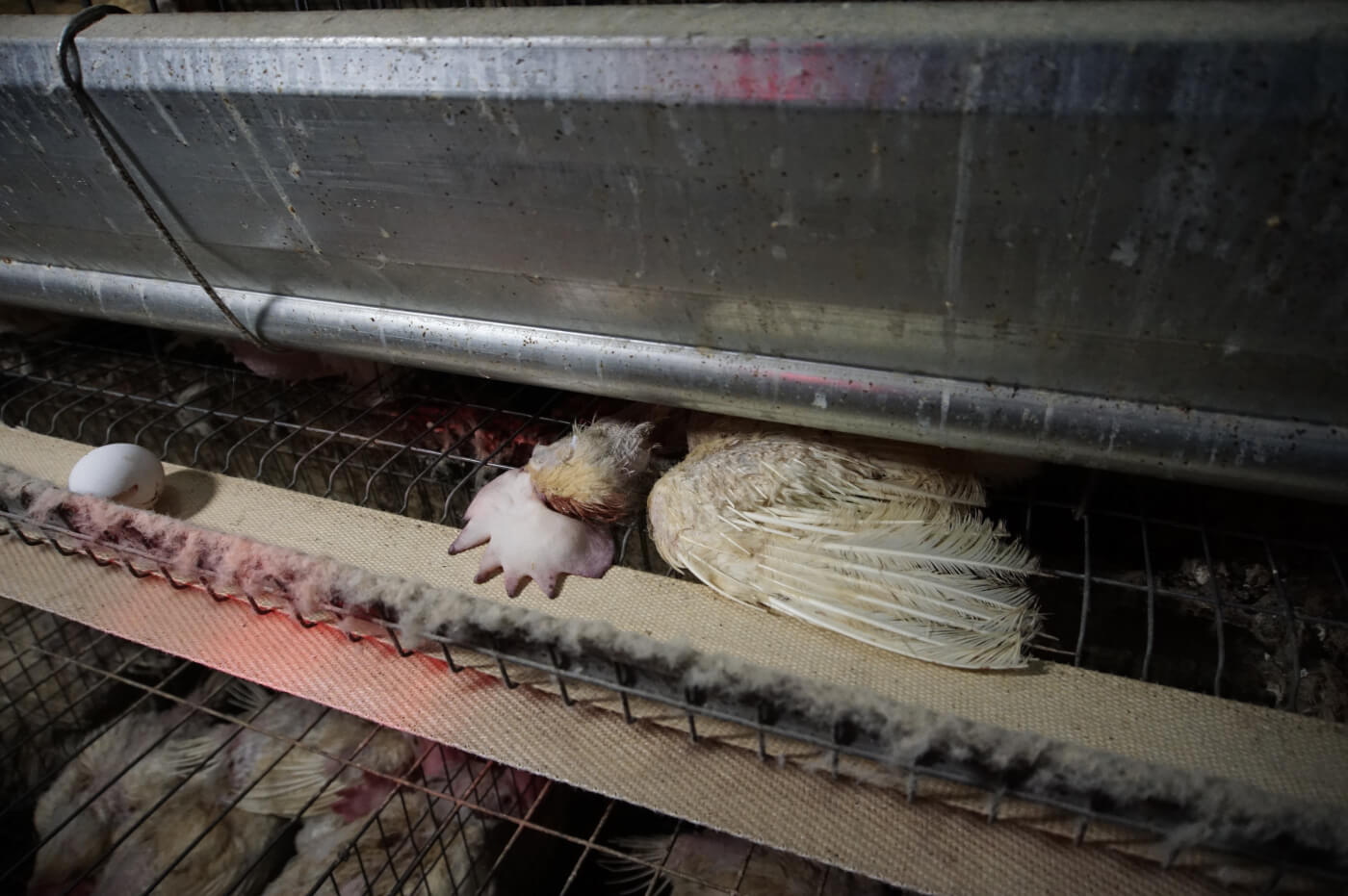 The eyewitnesses found dead hens in various stages of decay inside the cages. Live hens were forced to live amid the corpses.

Unable to Escape Their Own Waste

The hens were packed closely together inside cages stacked on top of each other. Those above had no choice but to urinate and defecate on the ones below. Chickens are clean, fastidious animals who need to preen and take dust baths regularly. But on farms like these, they’re forced to live in filth. 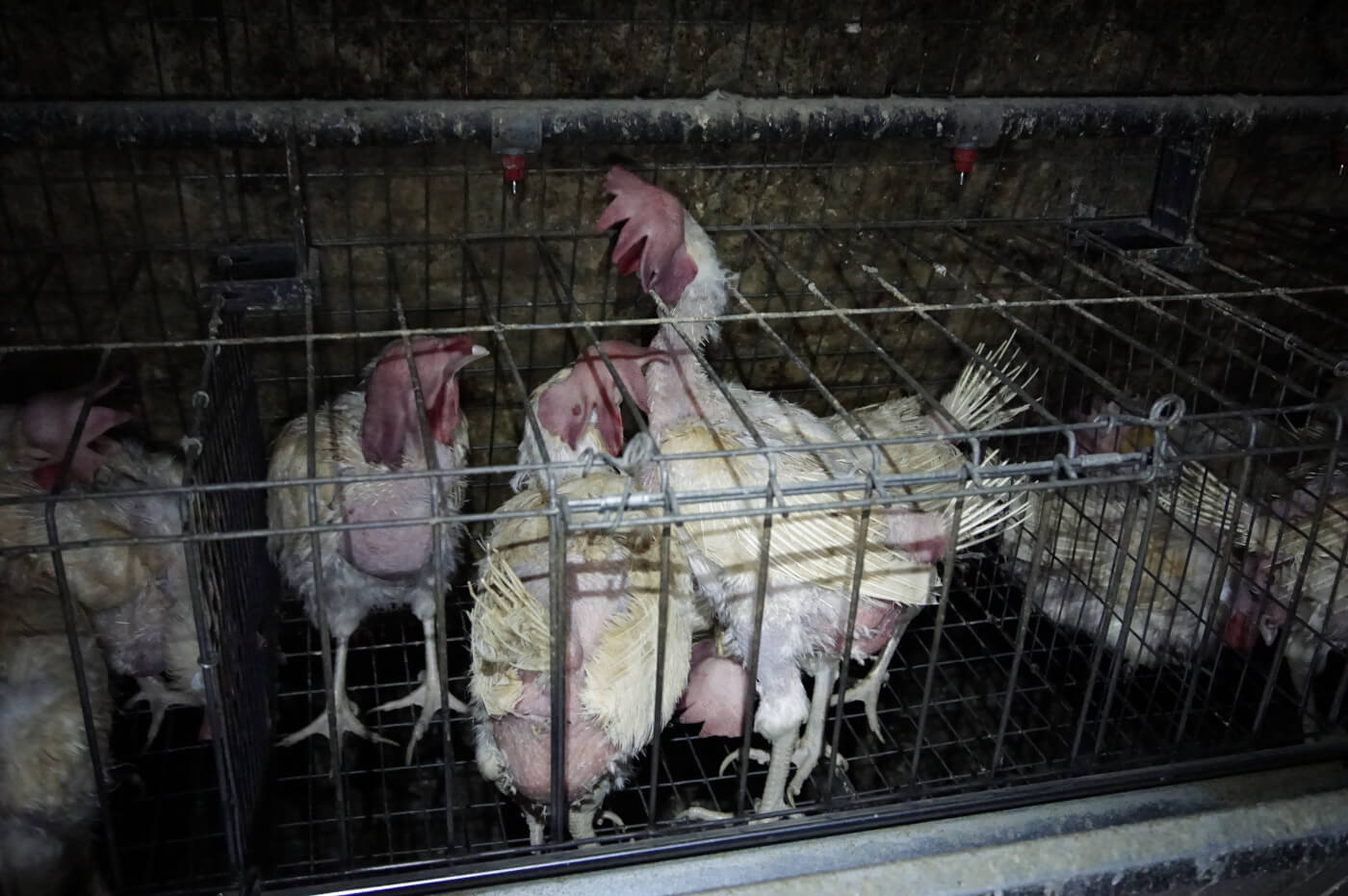 Hens had nowhere to stand, sit, or lie down, except for the wire flooring. Their claws were severely overgrown. Their skin was burned by the ammonia fumes that hung in the air.

Injured, Sick, and in Pain

One hen’s cloaca was prolapsed, a very painful—and sometimes fatal—condition often caused by a poor diet or the strain of laying far more eggs than is natural. (She was rescued by the eyewitnesses and given veterinary care.) Many others suffered from painful injuries and inflamed feet, the result of standing on wire flooring without any relief. With nothing to wear them down, their claws had become overgrown.

Ammonia fumes caused by the accumulation of excrement permeated the air, irritated the hens’ lungs, and burned their skin. According to Dr. van Ekert, these burns cause a condition known as “scald,” which feels like “being scalded with hot water.” 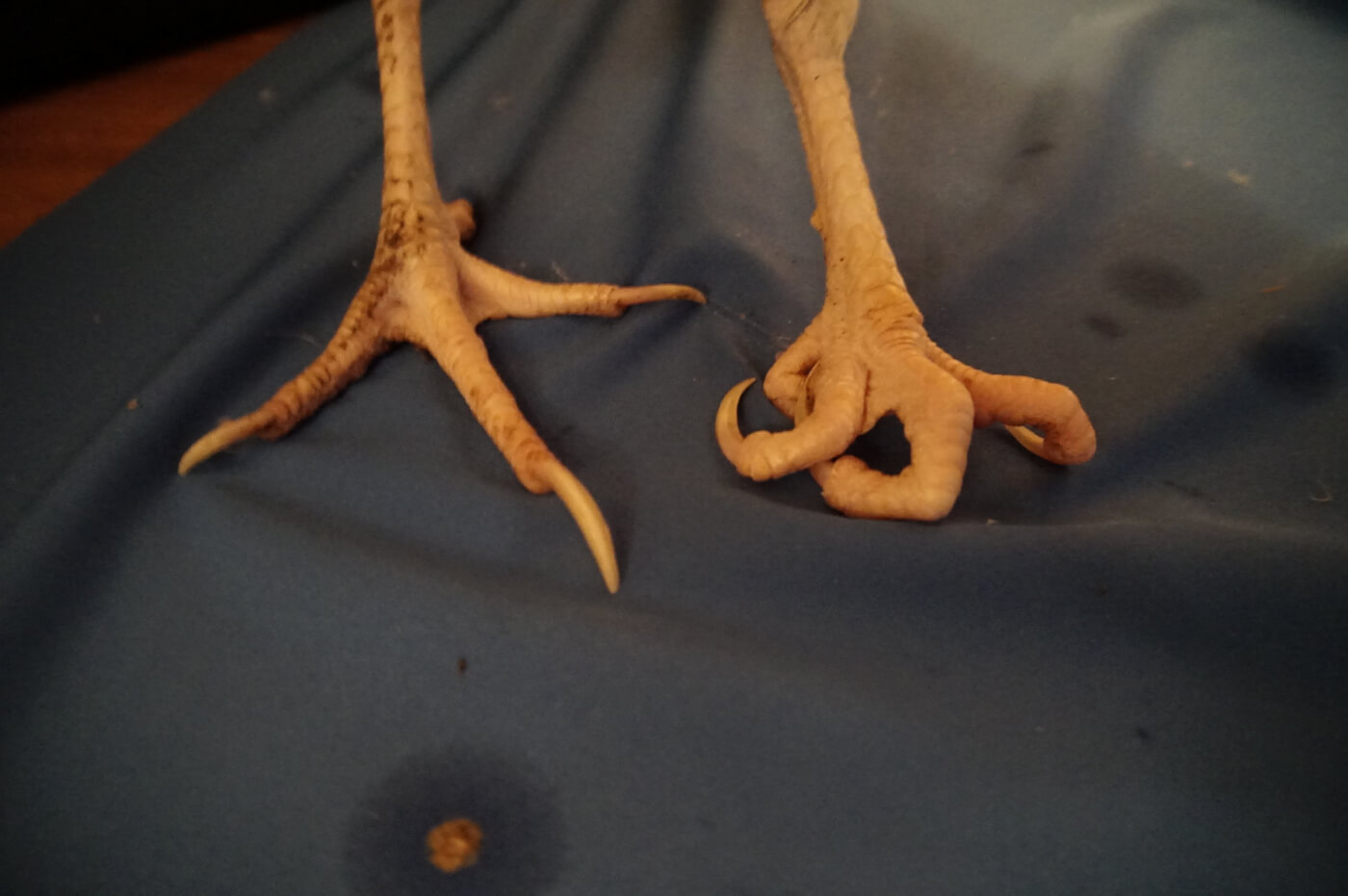 This rescued hen’s toes were curled under, and her claws were severely overgrown, likely the result of spending every day and night on wire flooring. 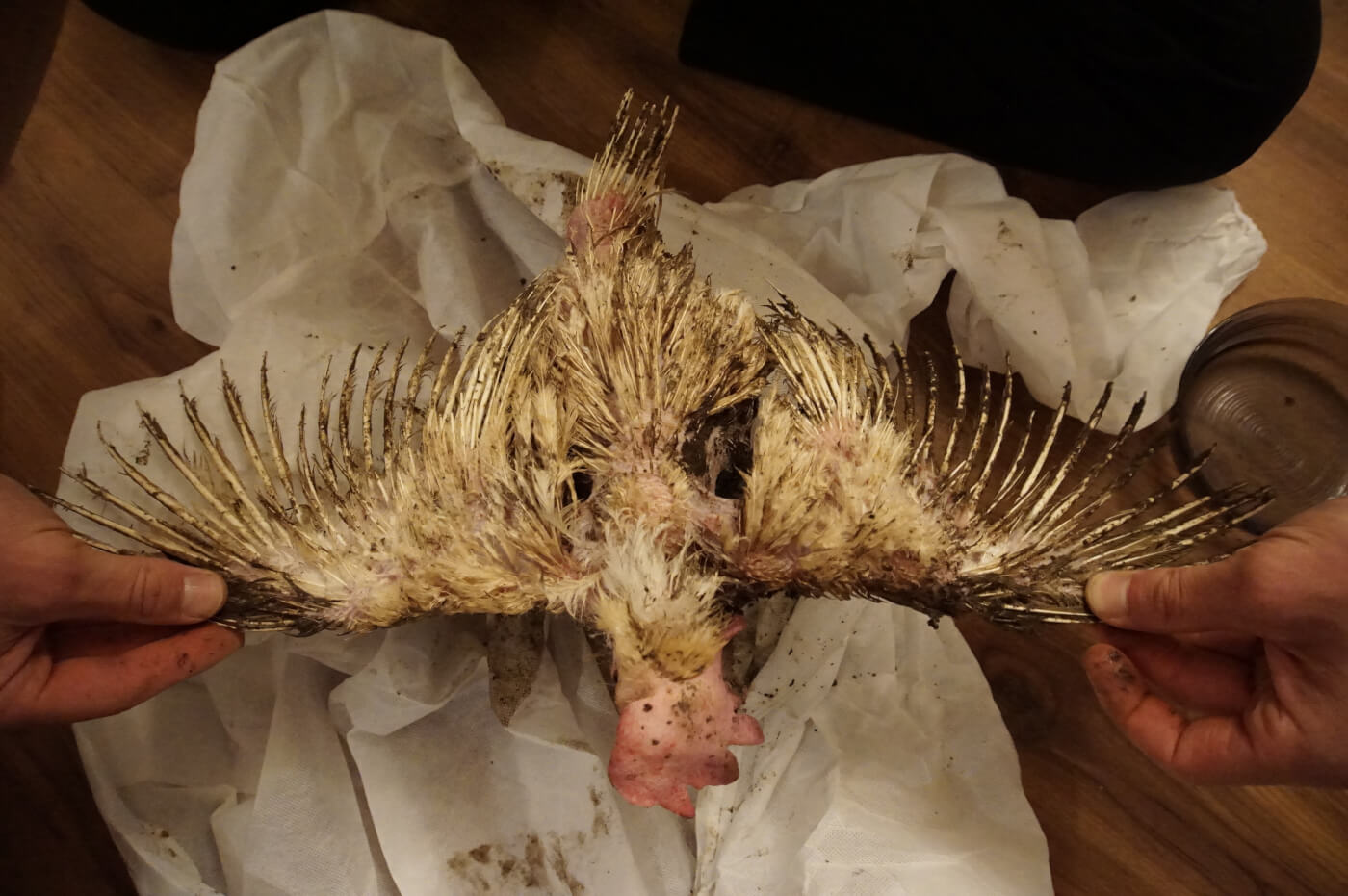 This hen was also found in—and rescued from—a manure pit. She was emaciated, and the few feathers that she had left were covered with feces.

An Industry of Despair

In Canada alone, around 20 million hens are being exploited for their eggs in warehouses like these. Worldwide, billions endure similar treatment. These horrifying conditions are the only existence they will ever know. Meanwhile, their brothers are deemed useless by the egg industry and killed shortly after hatching. “Layer” hens are selectively bred to produce as many eggs as possible. After about two years of exploitation, they’re “spent” and their egg production declines. Many are then hauled off to slaughterhouses, where their throats are slit and their bruised and battered flesh is used to make pet food or soup. 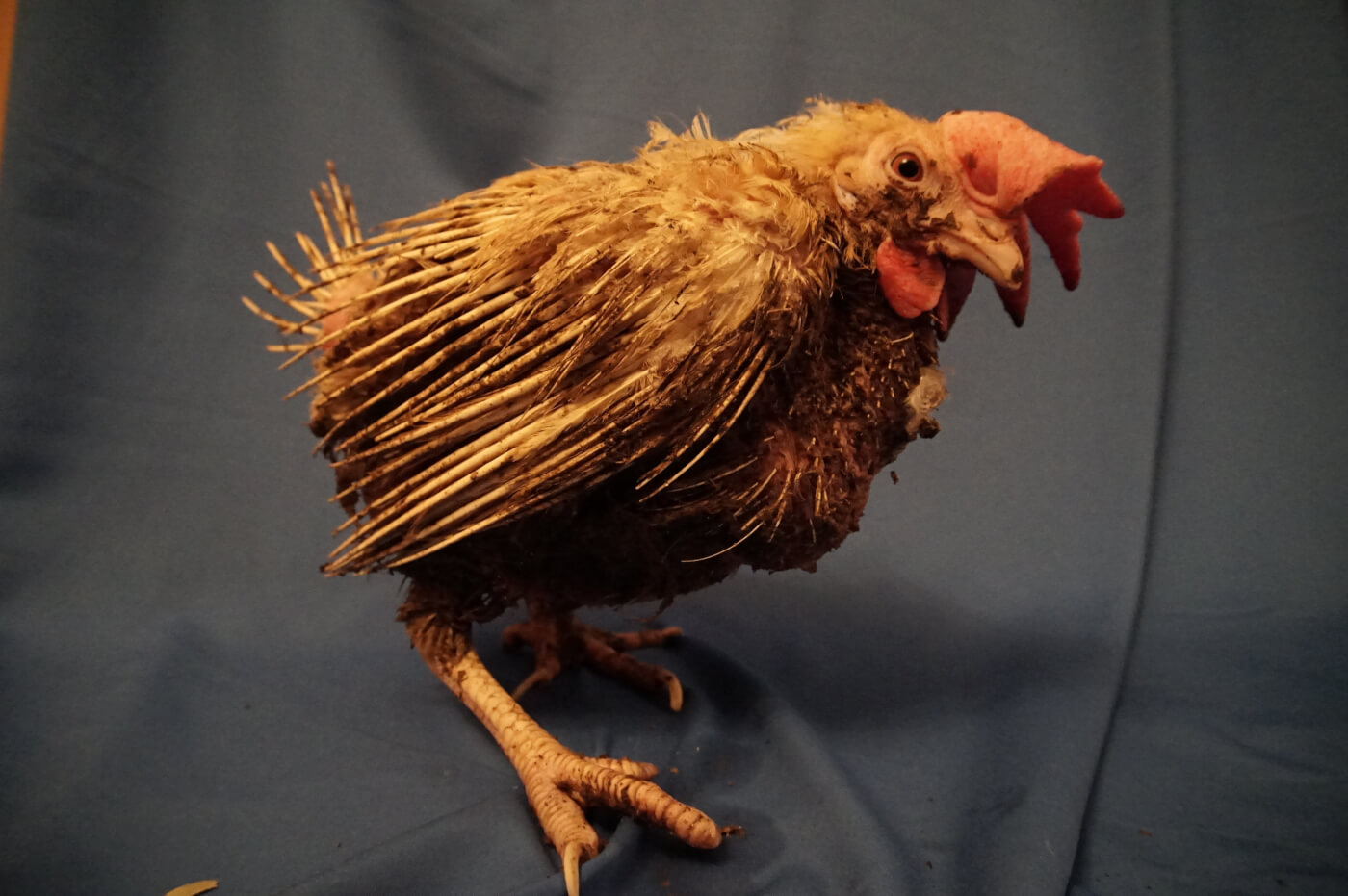 The eyewitnesses also rescued this hen from a manure pit and rushed her to a veterinarian.

You Can Help Stop This!

The best thing that you can do for hens is to refuse to buy their eggs and flesh. With so many delicious, healthy alternatives, it’s never been easier to leave animal-derived foods off your plate.