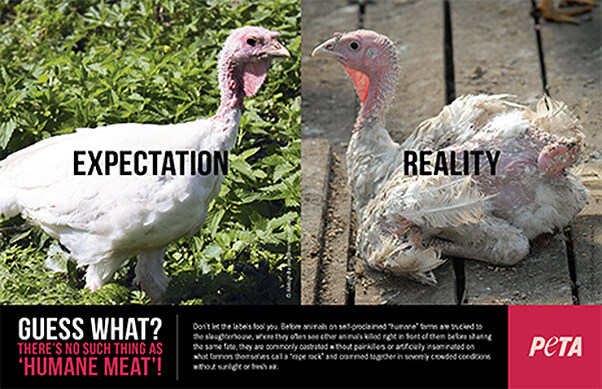 The owner of a small, family-operated poultry and egg farm, inaptly named “Happy Farm,” has been charged with 46 counts of cruelty to animals.

Montgomery County Animal Control received a complaint about Happy Farm in Dickerson, Maryland. When authorities investigated, they found the bodies and even mere bones of dead animals, a bucket of intestines swarming with flies, birds licking blood off the floor, and three ducks cannibalizing a dead bird.

Chickens were dirty and had drooping wings, swollen eyes, and labored breathing. Investigators took two of the animals for veterinary treatment. After one of them died, authorities ordered a necropsy, which found that the bird had succumbed to pneumonia, septicemia, dehydration, and severe emaciation.

Chickens also tested positive for avian infectious bronchitis virus, Mycoplasma gallisepticum, and Mycoplasma synoviae, which are contagious and deadly and have a detrimental impact on birds’ respiratory systems and joints.

We wish this were an isolated incident. Unfortunately, as numerous PETA eyewitness investigations have shown, “humane” labels are designed to make consumers feel better—and that’s pretty much all.

Looking for a meal free from suffering? You won’t find it in so-called “happy meat.” The only truly humane meal is a vegan one.