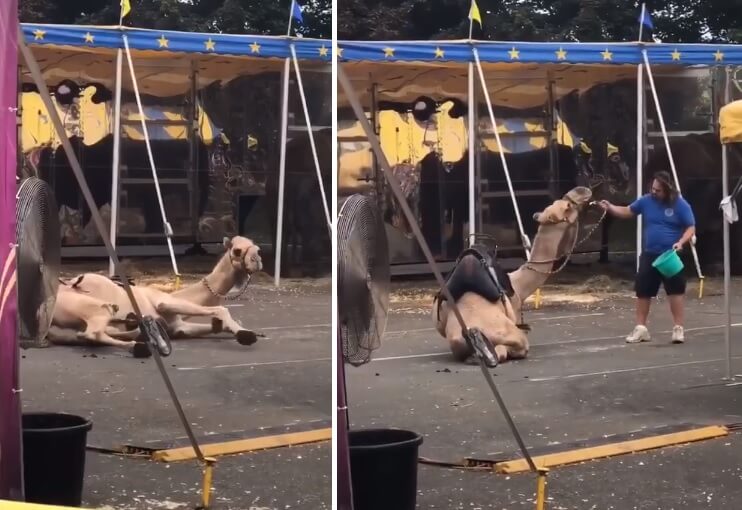 When a photo of a suffering elephant forced to give rides and a video of an apparently exhausted camel being violently jerked to stand up went viral, PETA—along with over 100,000 concerned citizens—called for an end to animal acts at the Eastern States Exposition (The Big E).

The Big E in West Springfield, Massachusetts, is just one of numerous animal-abusing fairs. But as evidenced by the intense backlash that it has received, these inhumane spectacles face more opposition now than ever before. Today’s compassionate public is rightly outraged at the sight of a tired, suffering elephant reportedly limping on concrete for human joyrides and a camel being yanked by the head for trying to rest.

“I hate it. It’s awful,” one woman, holding back tears, said to a CBS Boston reporter after watching the camel video. Another viewer said, “It’s wrong to force any animal to do any act, especially for people’s amusement.”

PETA recognized the elephant in the photo. Her name is Minnie, and like the camel seen in the video, she was supplied to the fair by the notoriously cruel R.W. Commerford & Sons Traveling Petting Zoo. We know from keeping tabs on her that she has a history of gait problems that are indicative of pain.

Commerford has been cited by the U.S. Department of Agriculture for multiple violations of the federal Animal Welfare Act. Last May, it failed to provide another elephant, named Beulah—who was also at The Big E—with adequate veterinary care for overgrown cuticles, a condition that can predispose these animals to painful foot disease, which is a leading cause of death in captive elephants.

Forcing animals into slavery so that they’ll perform for humans is inhumane. Period.

Just like humans, animals want to live free from harm and torment. But these sensitive, conscious living beings are treated as nothing more than lifeless props for human entertainment.

Imagine being stolen from your home or being bred for the sole purpose of performing stupid, confusing tricks under the constant threat of violence. Animals used in traveling shows are typically separated from their mothers as babies, spend most of their lives confined to cages or shackled, and are forced to eat, sleep, and defecate in the same cramped space. They can’t choose how to spend their day, whom to mate with, or even when to rest.

Don’t let Minnie and this camel suffer in vain—help end all animal acts!

If you’re a Massachusetts resident, contact your legislators and ask them to support H. 418, which would ban traveling elephant acts.

Wild-animal shows are on their way out—circuses are shutting down or dropping their animal acts, and hundreds of venues and dozens of communities are banning them. Yet some fairs still support the exploitation of nonhuman individuals for mere minutes of human entertainment.