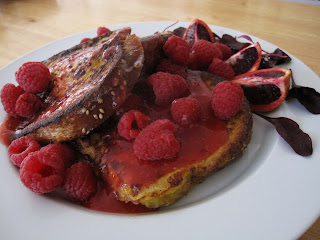 French Toast is a satisfying meal because it contains eggs, milk, and bread. Depending on the ingredients, it can also be a caloric meal. For some reason (maybe magazine ads) I felt like making French Toast for breakfast, and I lightened the recipe considerably. A few ingredient swaps make this recipe lighter and healthier.

The recipe calls for four eggs. I used two eggs and a half cup of egg substitute. Fat-free milk and half and half also lightened the recipe. I used Neufchatel cheese because it has a lower fat content than cream cheese. For color and flavor, I sprinkled fresh raspberries on top of the casserole. You may add more raspberries if you wish, but be careful because the berries will exude juice as they bake. Instead of white bread, I used English muffins and the result was better than I hoped.

When I took the casserole out of the oven, the smell of raspberries and vanilla wafted through the kitchen.

Combining dry bread with eggs and milk is an idea that goes back to Roman times, according to “The Origin of French Toast,” an article posted on the Chef Talk website. While the recipe originated in France, many cultures, including the Romans, Germans, Spanish, and British developed similar recipes and names. In French, the recipe is called “pain perdu,” which means lost bread. In Spanish the recipe is called “torriga.” In England it is called “Poor Knights of Windsor,” which may be a reference to the thriftiness of the dish.

My recipe for Oven French Toast with Neufchatel Cheese and Raspberries is a make-ahead recipe and you refrigerate it overnight.However, you can make it early in the morning, refrigerate it for the day, and serve it for dinner with bacon, sausage, or ham. The custard ingredients may be combined with a whisk, but you will probably have a few cheese lumps. Blueberries and blackberries may be substituted for the raspberries. Use frozen berries if fresh aren’t available.

Coat an 8-inch by 8-inch baking pan with baking spray. Scatter English muffin cubes in baking pan, making sure some are in the corners. Using an electric mixer, beat the Neufchatel cheese, eggs, egg substitute, milk, half and half, and maple syrup together until well blended. (There shouldn’t be any lumps of cheese.) Pour this mixture over the English muffin cubes. Sprinkle raspberries over top of casserole. Cover with plastic wrap and refrigerate over night. Remove from refrigerator and bring the casserole to room temperature. Heat oven to 375 degrees. Remove plastic wrap and bake casserole for 40-45 minutes, or until the top starts to brown. Cut into squares and serve with butter and maple syrup. Makes 9 servings.