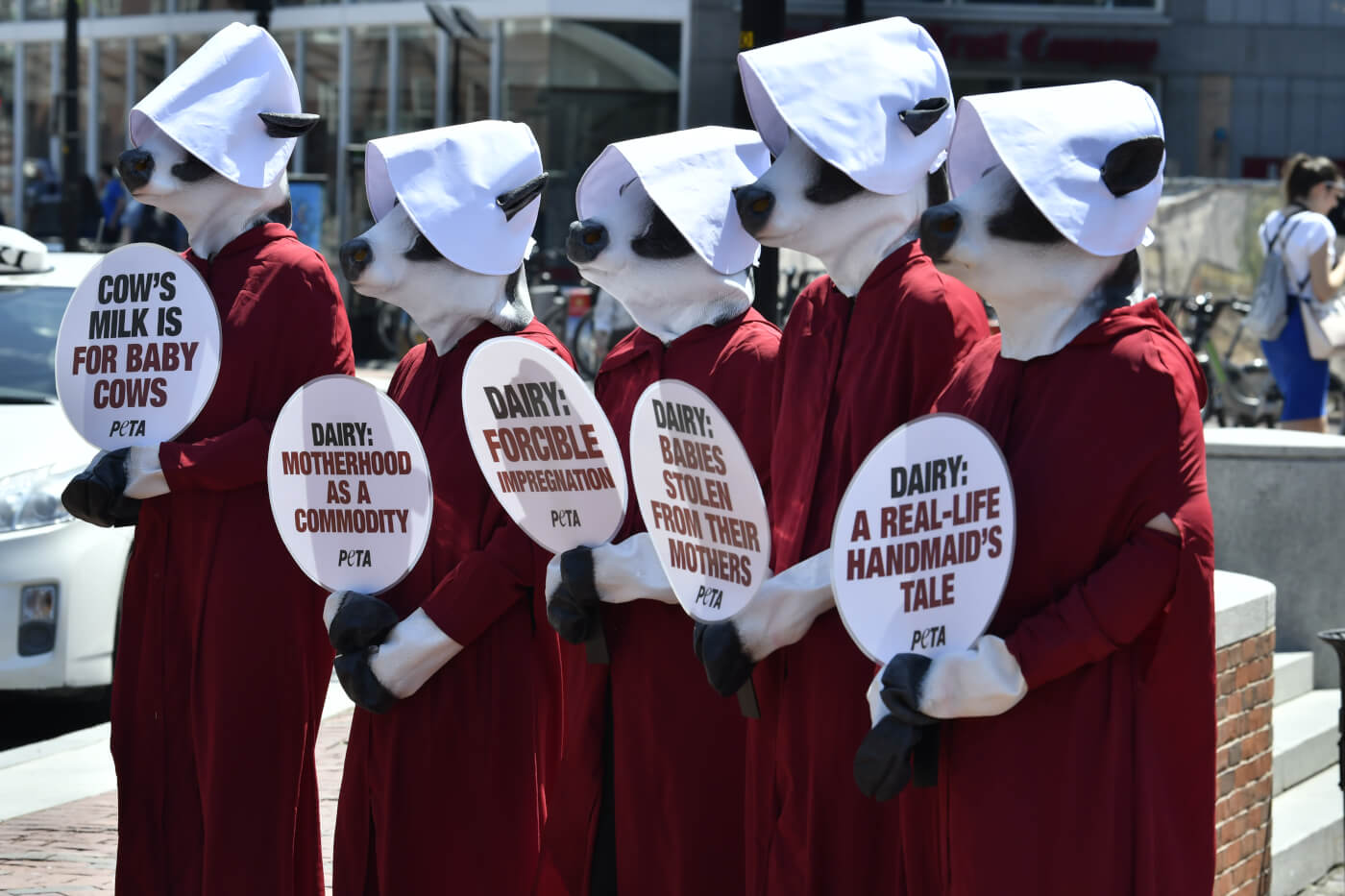 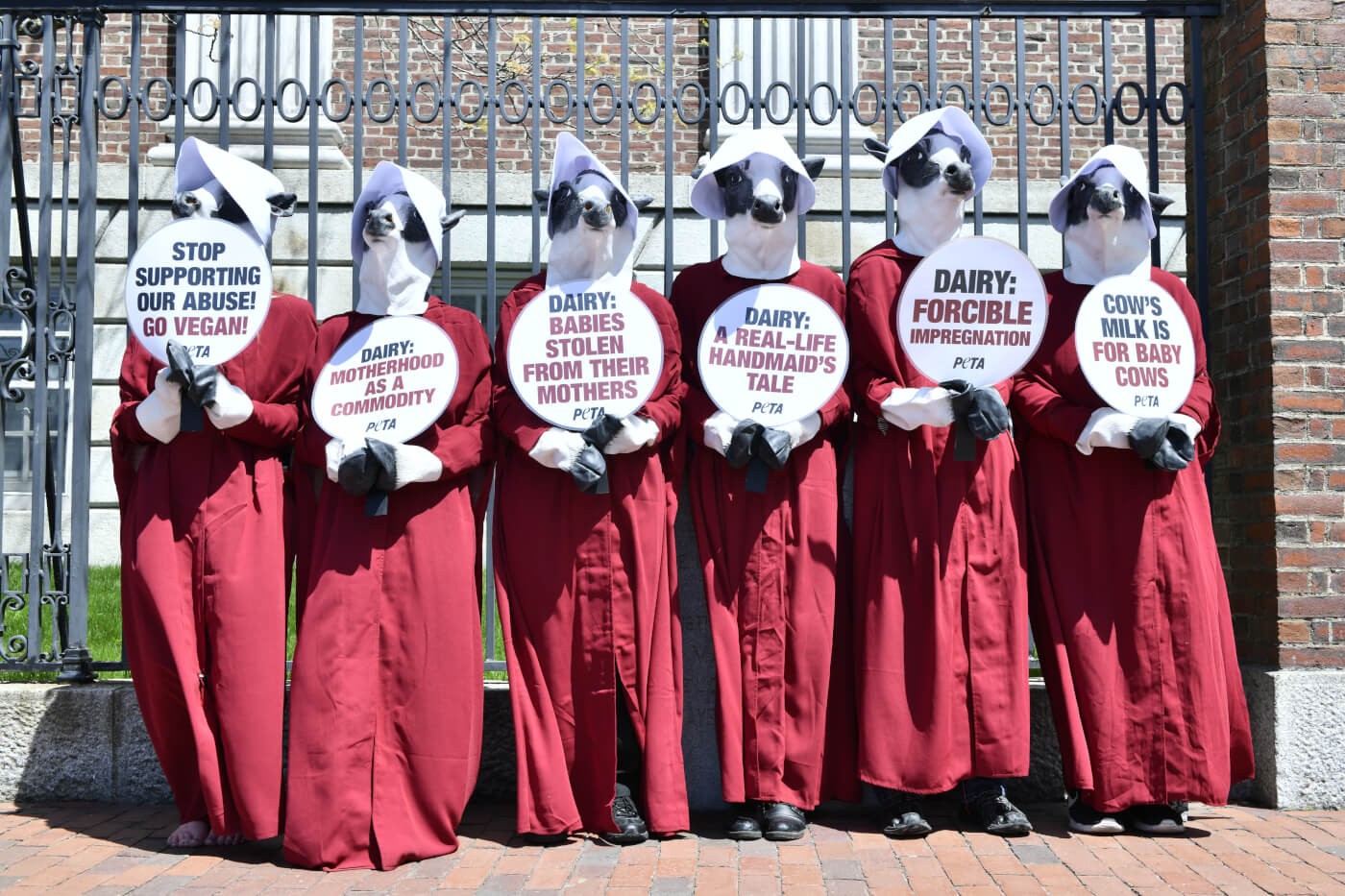 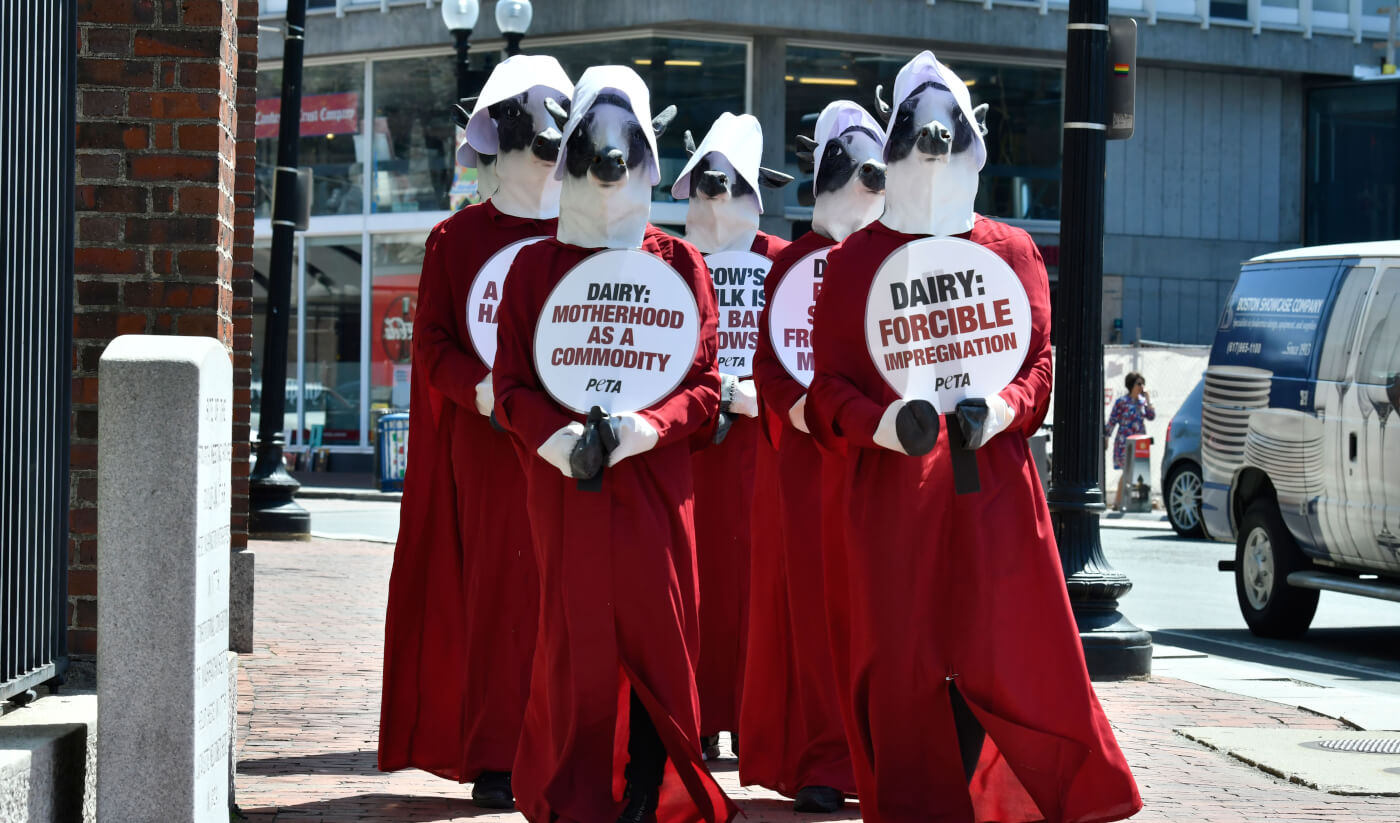 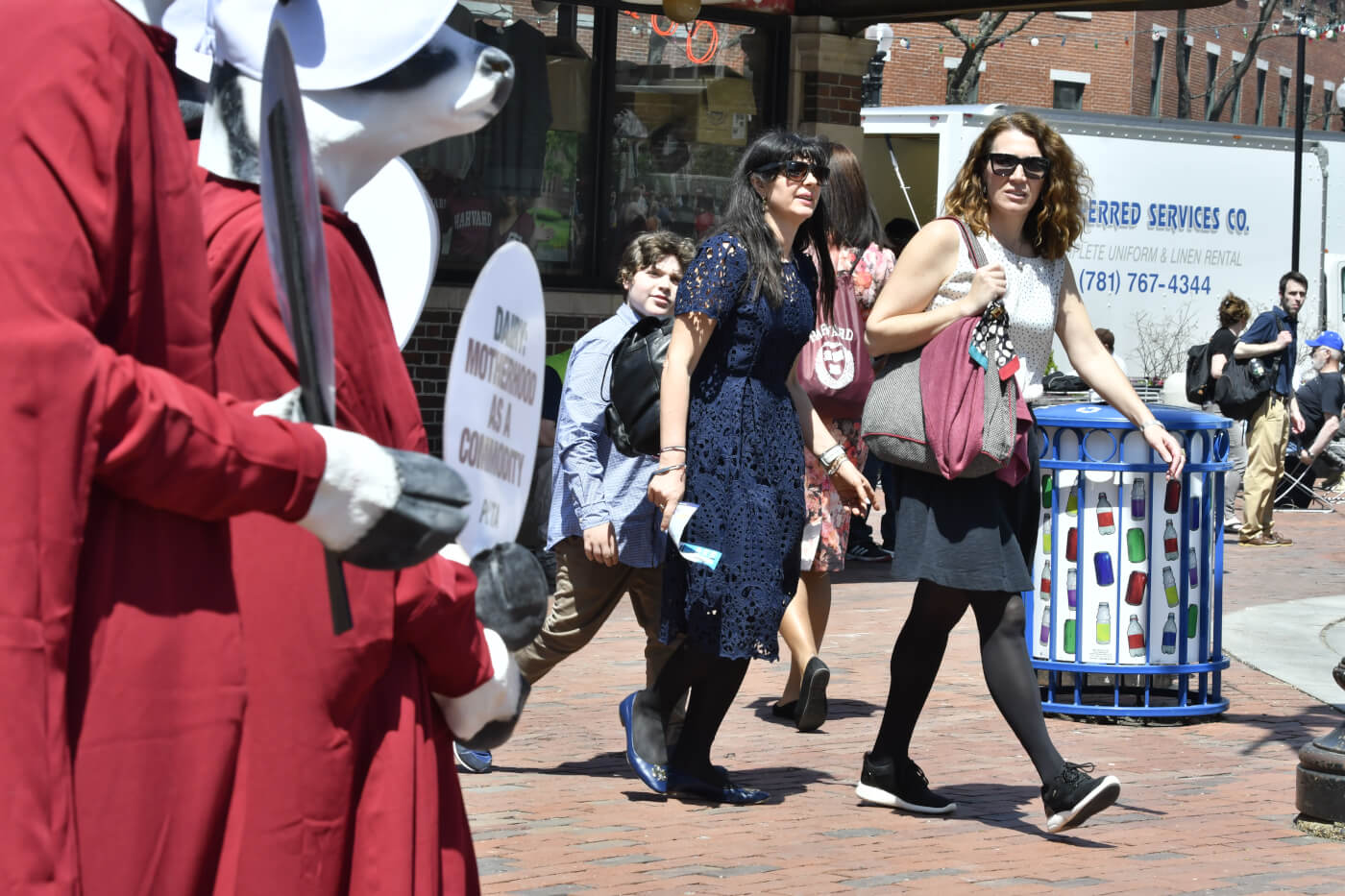 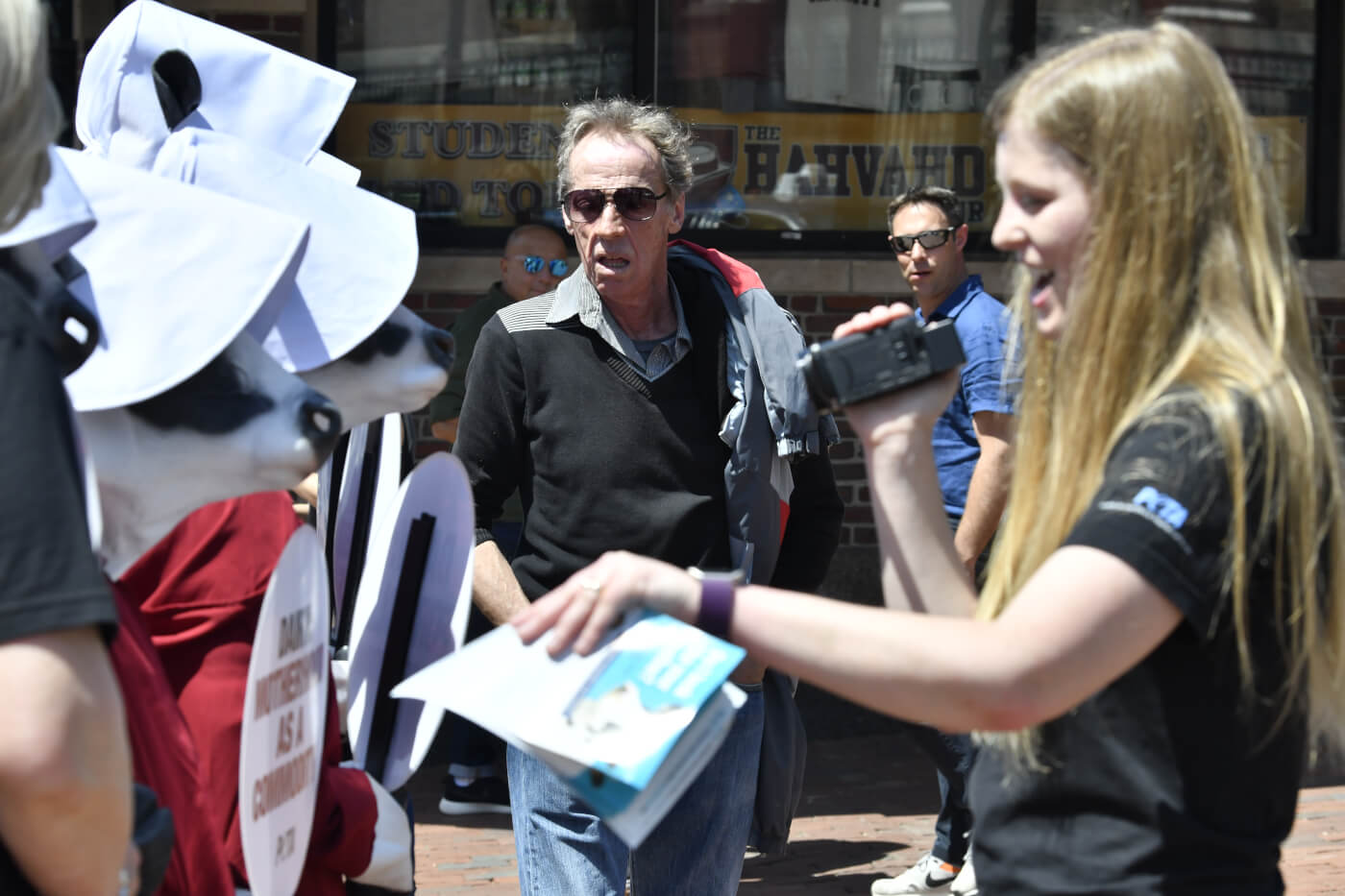 Just before the series’ third episode of season two aired, activists took to the streets to remind people that buying dairy “products” supports a real-life handmaid’s tale. Mesmerized onlookers were prompted by the handmaid “cows” to stop supporting such abuse by going vegan.

What Do Dairy Farms Have to Do With The Handmaid’s Tale?

Studded with an ear tag. Transported in cramped, dark trucks. Corralled by barking dogs. Limbs bound. Jabbed with electric prods. Impregnated. Chained. Their babies stolen from them. Led to slaughter. These are moments from The Handmaid’s Tale—moments that could easily be mistaken for real-life scenes from a PETA Asia eyewitness investigation of a typical commercial dairy farm.

The Handmaid’s Tale resonates with women who can relate to being seen as nothing more than their bodies. Cows imprisoned on dairy farms are valued only for their biology, just like the handmaids in the Republic of Gilead. These cows and their daughters endure a lifetime of trauma and misery, while their sons—who are considered worthless to the dairy industry—are often sold for veal.

What exactly is veal? Cows used by the dairy industry have to be pregnant to produce milk, & because their baby boys will never make milk of their own, many of those calves are killed very young. Veal is a co-product of the dairy industry. NEVER eat veal or buy dairy products. pic.twitter.com/4MQi6pJKMP

Cows used by the dairy industry are forcibly impregnated through artificial insemination again and again on rape racks. That’s right—rape racks. All for your milk, cheese, and yogurt.

Mother cows are violated on “rape racks” to get milk for your cheese. #NationalMilkDaypic.twitter.com/hcnMpmg0Dg

Like the handmaids in the award-winning Hulu series, these cows’ babies are generally torn away from their mothers within a day of birth, which causes them both extreme distress. Mother cows can be heard calling for their calves for days.

Mother cows in the dairy industry have their babies taken from them. Can you imagine the pain & confusion they feel? 💔 #Februdairypic.twitter.com/aNgNXqUKMt

Five to six years after they’re born, after their bodies have been broken by a life of incessant pregnancy and lactation, these cows meet a violent death at the slaughterhouse—something that Elisabeth Moss’ character, June Osborne, knows a thing or two about. In episode two of season two, Osborne tells Nick, who’s trying to help her escape, “Do you know what this is? Do you know what happened here? It’s a slaughterhouse.” The fear and torment evident in her eyes are the same harrowing terror and heartbreak felt by every cow who is used and abused in the dairy industry.

So if you thought food couldn’t be sexist, think again. Cheese, milk, and other dairy “products” are among the most sexist foods that you can eat. Every time you purchase one of these items, you’re directly supporting the almost unimaginable suffering of and violence against mothers and their babies.

Mothers and Female Members of All Species Deserve Better

If cows imprisoned on dairy farms could speak, they’d beg, “Get me out of here,” just like Osborne in The Handmaid’s Tale. You can help these cows and help end the violence, reproductive control, and rape of female animals. They desperately need us to speak up for them—click the button below to help end their suffering:

Click here to learn more about the undeniable connection between feminism and animal rights.