PETA’s protests are taking over Florida roadways. Two trucks bearing 3-D PETA billboards depicting exploited orcas in tiny tanks circled around the vicinity of SeaWorld Orlando and the Miami Seaquarium for hours urging people to stay away from these notorious animal prisons. 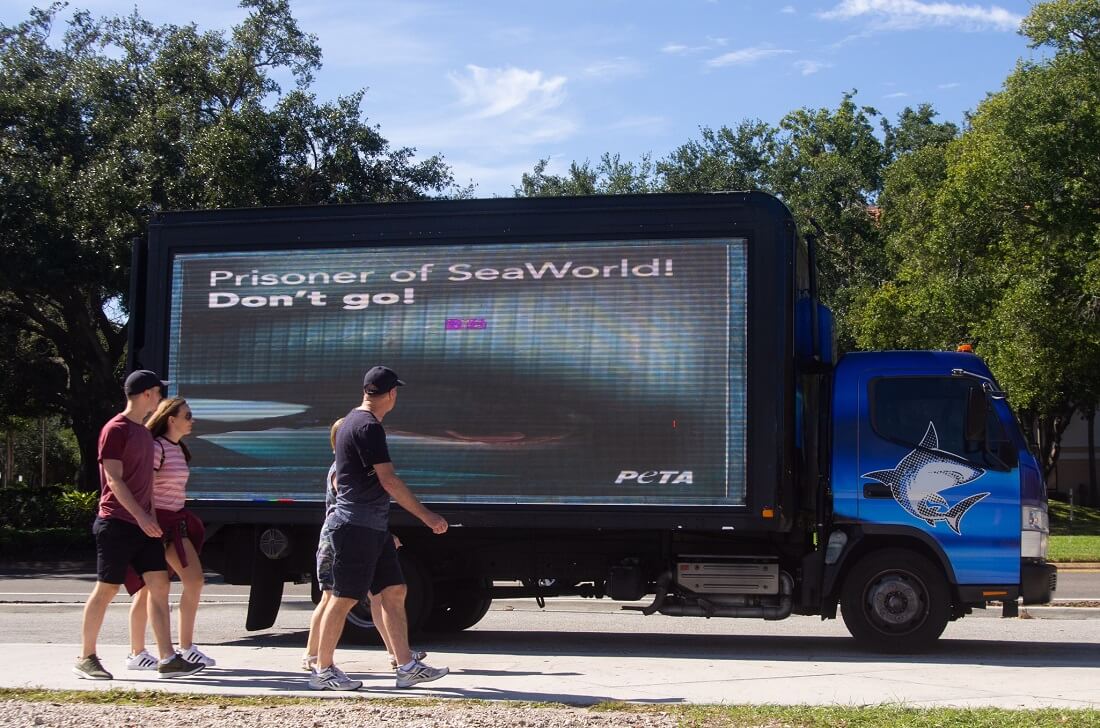 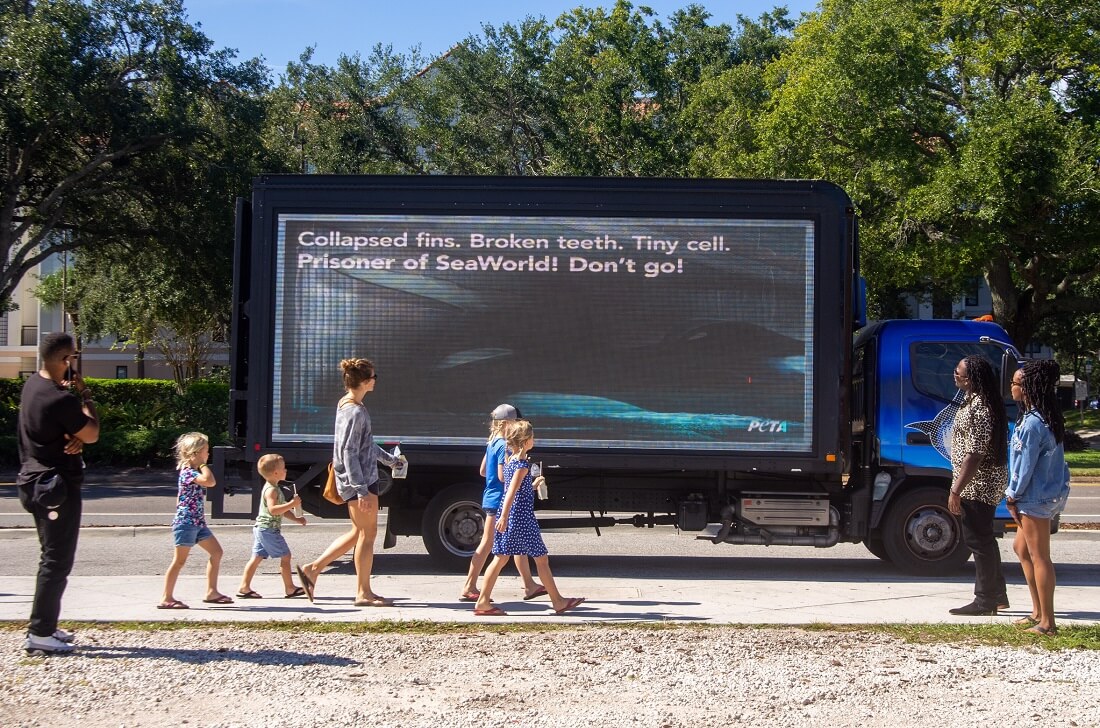 Meanwhile, in Miami, PETA ran a similar mobile billboard with the message “Abducted from the wild. Hasn’t seen another orca since 1980. Free Lolita! Boycott Miami Seaquarium!” which was driven around the vicinity of the oceanarium.

At marine parks, far-ranging, complex orcas’ bodies and minds break down as they’re forced to languish day after day in cramped tanks.

PETA’s mobile ads draw attention to the profound suffering of orcas, other dolphins, and all other animals imprisoned at SeaWorld and the Miami Seaquarium. Anyone with a sliver of compassion for thinking, feeling animals should avoid these places like the plague. 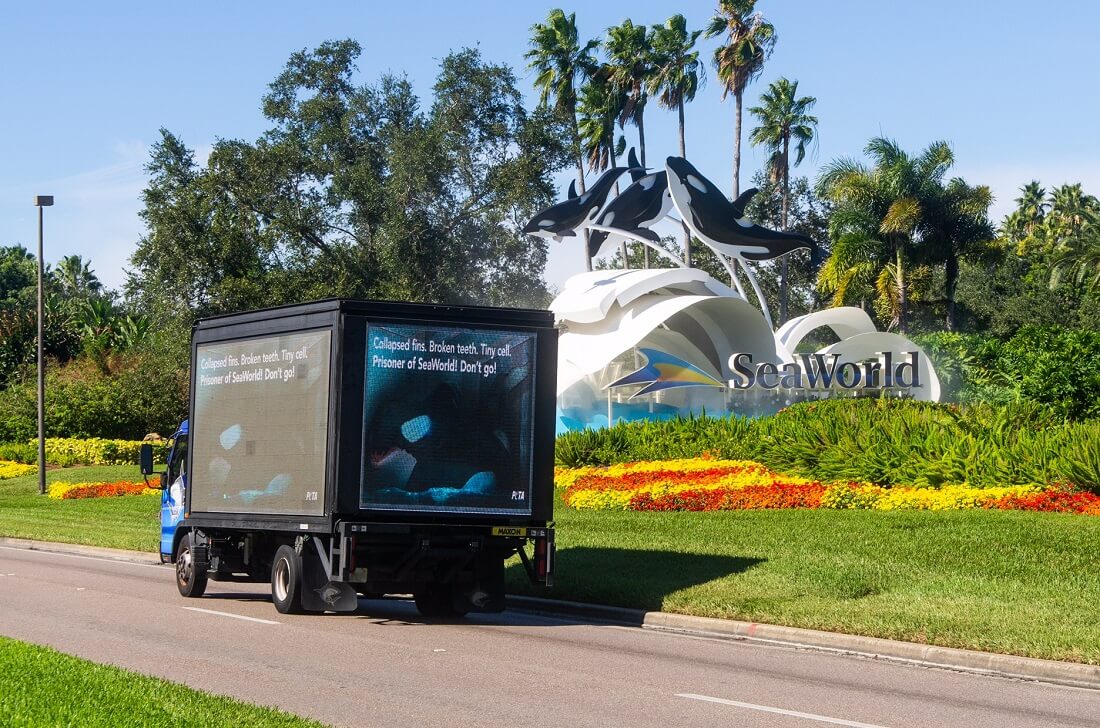 In the wild, orcas travel as far as 140 miles every day with their family pods. But at SeaWorld and the Miami Seaquarium, they swim listlessly in circles in chemical-filled water inside barren tanks that, to them, are the size of a bathtub. Many have severely damaged teeth, likely caused by gnawing on the metal bars and concrete corners of the tanks out of stress. More than 40 orcas have died on SeaWorld’s watch, from causes such as severe trauma, intestinal gangrene, and chronic cardiovascular failure—and not one has reached the maximum life expectancy of the species in nature.

More than 300 other dolphins and whales have died on SeaWorld’s watch, many of them prematurely.

After years of controversy and backlash enflamed by PETA campaigns, SeaWorld shut down its orca-breeding program. However, other dolphins are still being drugged and forcibly impregnated there. They’re also torn away from their families and shipped from park to park.

In nature, dolphins swim across vast distances every day with their extended families, exploring new places and seeking out adventures and pursuits. But at SeaWorld and Miami Seaquarium, these highly intelligent social animals are confined to tiny tanks and have nothing but the same concrete walls to look at every day of their lives.

Inside their cramped prisons, these animals demonstrate a variety of types of stress-driven behavior, including self-inflicted injuries, aggressiveness, and neurotic behavior. Captive dolphins are often dosed with antacids to treat stress-induced ulcers.

Dolphins in “petting pools”—where humans can pet, kiss, and even ride imprisoned dolphins—can become neurotic and anxious as a result of being constant poked and prodded and can become sick from exposure to bacteria. The U.S. Department of Agriculture has cited SeaWorld for several instances in which members of the public, including children, were bitten and injured at the facility’s dolphin-petting pools.

Hit these animal abusers where it hurts—their wallets. PETA has persuaded numerous organizations and companies to end their affiliations with SeaWorld—including the Miami Dolphins, STA Travel, and JetBlue, Southwest, and United airlines. But there’s still work to be done. Using our rapid-action form below, write to businesses that still have ties with SeaWorld despite the overwhelming evidence of the park’s animal abuse.