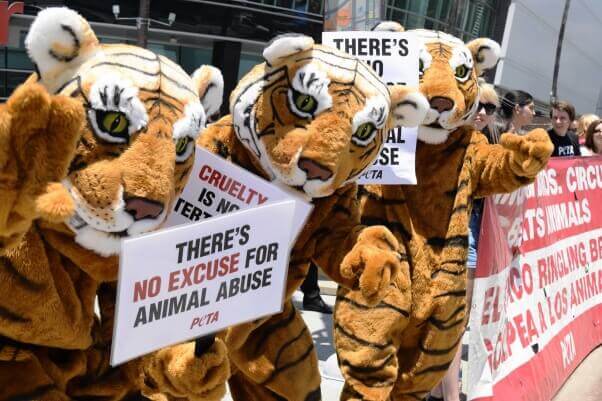 Elephants, tigers, and other animals that circuses use to entertain audiences don’t stand on their heads, jump through hoops, or balance on pedestals because they want to. They perform these and other difficult tricks because they’re afraid of the consequences of not doing so.

Informed, compassionate consumers know that in order to force animals to perform, circus trainers abuse them with whips, muzzles, electric prods, bullhooks, and other painful tools of the circus trade. Video footage of animal-training sessions confirms that these upsetting practices are merely “business as usual” for circus exhibitors.

Animals are suffering in traveling circus acts. But together, we can help them.

With your help, we can get animals used in traveling circuses off the road. Following 36 years of PETA protests against Ringling Bros. and Barnum & Bailey Circus, which reduced attendance to the point of no return, the notoriously abusive circus was forced to end its animal acts and close up shop in 2017, after 146 years in business.

Today, despite a shift in public opinion, some circuses continue to use cruel animal acts. While animal-free circuses thrill audiences across the country, some shows simply refuse to evolve and do the compassionate thing. That’s why conscientious people like you must keep the pressure on.

Speak up for all animals being used as entertainment in circus shows. Using the form below, you can urge multiple circuses (and the venues that host them) to stop exploiting bears, tigers, and other animals. You’ll tell them to do the right thing by featuring only talented and willing human performers.

There are multiple opportunities to help. As soon as you take one action below, another will appear in its place. After you enter your information, just keep clicking “Send Message” to make sure that your voice is heard. Once you’ve taken every action, share this page with your friends and family members. Encourage them to add their voices and help animals used in traveling circuses.