All February long, PETA and our international affiliates were a global force for animals. Love was in the air for Valentine’s Day, and we helped people and companies everywhere get in touch with their sweeter side to help animals. And in true PETA fashion, we weren’t scared to get a little spicy when needed. Check out some of what we’ve been up to!

In Salt Lake City and Canada, our “Vegans Make Better Lovers” demonstrations brought foot traffic to a halt as people stopped to pose with our vegan volunteers in bed (dogs were welcome, too!) and ask questions about eating vegan. 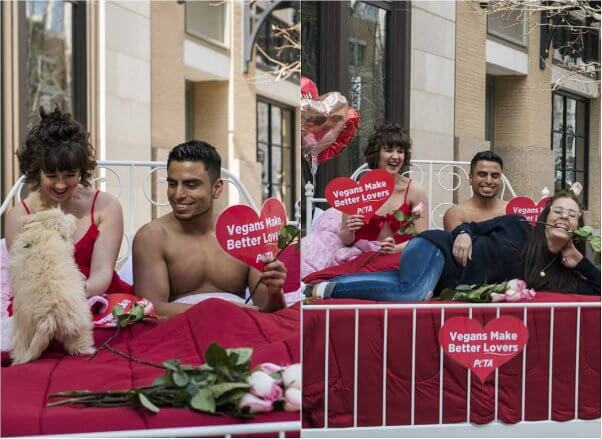 The people of #Ottawa LOVED our #vegan lovers 💘 Their reactions were priceless 😉 #GoVegan#ValentinesDaypic.twitter.com/Yj9CFAOTk3

How did you spend your Valentine’s Day? PETA affiliates around the world spread some vegan love by giving out free food to everyone they met. Check out these shots of PETA  Asia and PETA India staff and interns handing out free vegan starter kits and vegan candy.

How did you spend your #ValentinesDay?@PETAAsia interns spent the day handing out free vegan starter kits and #vegan candy in #Manila, and encouraged people to love all animals ❤

At New York Fashion Week, PETA enlisted the help of some “fashion police” to remind people on the streets that animals suffer and die for animal-derived materials like fur, leather, and wool. 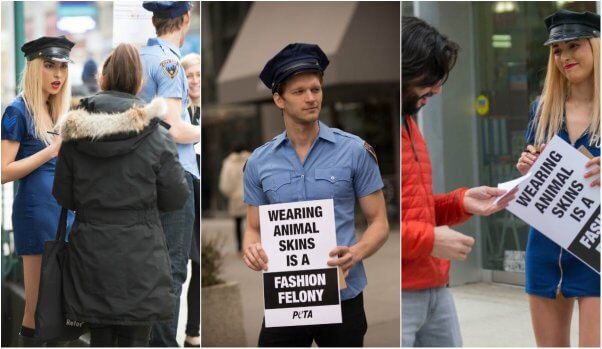 If you’d like to lay down the law and help animals used for fashion, tell Canada Goose to ditch fur and down. Then let our “How to Wear Vegan” guide help you revolutionize your wardrobe.

‘I, Calf’ Heads to Texas and Florida

These people were able to see—and feel—what it’s like to be a cow born on a dairy farm, when PETA’s traveling virtual reality experience “I, Calf” rolled into town: 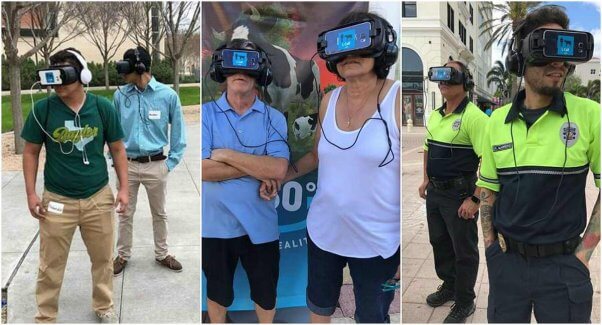 Based on a true story, these viewers were placed “in the body” of a young calf whose mother secretly gave birth to twins and, remembering that farmers had taken her previous babies away, hid one of the newborns to protect him. Does this make the dairy industry sound traumatic and heartless? That’s because it is.

Our impossible-to-ignore “mouse” mascot paid a visit to the University of Pittsburgh to protest cruel and pointless sepsis experiments on mice that have no applicability to humans. 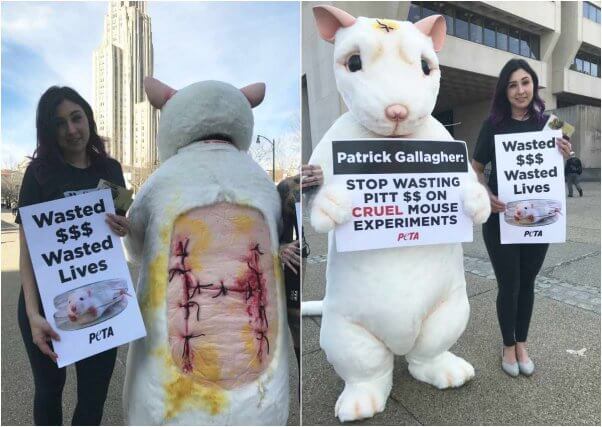 You can help these animals.

And heads up! PETA paid a surprise visit to Texas A&M University (TAMU) alumni at a luncheon on campus, where the school’s president was speaking. The protesters’ message, “Close the Dog Lab”—referring to cruel muscular dystrophy experiments on dogs—was attached to a bunch of red balloons, causing it to float to the ceiling and remain out of reach but plainly in sight for the duration of the event. Check it out:

Not one more dog should suffer inside @TAMU‘s cruel muscular dystrophy lab! Join PETA in demanding they shut it down: https://t.co/AdmI5LX7ukpic.twitter.com/AJWmEcKkhm

The school’s Board of Regents meeting also featured a PETA presence—something that TAMU can expect until the day these twisted experiments on dogs end.

Join us and take action to help dogs.

L.A. Gets a New ‘Not You Mom, Not Your Milk’ Mural

If she’s not your mom, it’s not your milk. Artists Damon Martin & Phil America collaborated with PETA to create this powerful mural in #LA. pic.twitter.com/35j8s5ET01

Need help ditching dairy milk? Try one of our favorite vegan milks instead!

PETA and our international affiliates are driving positive, global change for animals.

PETA France supporters installed a “cemetery” in front of Marineland Antibes in tribute to Calypso, Clovis, Kim, Betty, Kim II, Sharkan, Freya, and Valentin, orcas who died prematurely in captivity at the park.

PETA U.K. activists crashed Fashion Week events in both London and Milan to speak out against fur and angora.

Activists crash #MilanFashionWeek to speak out against fur and angora 👏🐰 https://t.co/mF3kXqxaxopic.twitter.com/URzSccmYZw

Here’s how you kick off @LondonFashionWk 👊 These PETA supporters went topless to make a bold statement for animals killed for fashion. https://t.co/t2h0PlDFgo#WearYourOwnSkin#LFWpic.twitter.com/TO0e1CXGMY

Compassionate travelers in the U.K. and Germany took to the streets to try to persuade travel company Thomas Cook to stop promoting SeaWorld.

Last week, PETA India urged IIT Bombay to go vegan. They haven’t yet agreed, but you can help us encourage them. Read on to learn more and how you can help:https://t.co/gbZWqcSATzhttps://t.co/gsSGL0xwPW

THIS is how you get people’s attention 👇 @PETAAsia activists protested @CanadaGooseInc for its sale of down in Seoul, South Korea, ahead of the #WinterOlympics. https://t.co/uYUbe1abkW#DitchDownpic.twitter.com/LXAFbHvftv

And after the opening ceremony, PETA  Asia took to Twitter to speak up for all animals killed for their fur.

So disappointing to see fur being used in costumes in the #OpeningCeremony for #PyeongChang2018 😔 It’s 2018. Champions don’t wear fur! #FurIsDeadpic.twitter.com/wjZ7WKnl3a

Motivated by all these inspiring activists?

Anything is possible when we stand together for animals. Learn how you can make a difference by joining PETA’s team: