During a presentation at the 2017 American Academy of Family Physicians FMX annual meeting, held this year in San Antonio, Texas, Dan Merenstein, MD, presented the evidence surrounding probiotic use. Dr. Merenstein is the director of Research Family Medicine and a full professor with tenure of Family Medicine at Georgetown University.
The presentation was sponsored by Nature Made. Dr. Merenstein produced all the slides without any input from Nature Made.

Probiotics: Widely Discussed, Now Widely Studied
The microbiome and probiotics are no longer on the fringes of medical science. In 1995, there were no publications regarding probiotics, and in 2016, that number had jumped to 2000. The microbiome and probiotics are widely discussed in consumer publications as well, such as The Economist, making this a hot topic of interest.
A study published recently in the journal Nature showed a significant reduction in sepsis and death among infants in rural India given probiotics. Fully, 4,556 healthy infants were given a preparation of Lactobacillus plantarum, plus fructooligosaccharide, and monitored for 60 days. There was, according to the study, a “significant reduction in the primary outcome [combination of sepsis and death] in the treatment arm.”1 Dr. Merenstein called this an “amazing outcome” and a “game changer worth noting.”

Why Is There a Need for Probiotics? The Altered Microbiome
Why are we missing microbes? It is more difficult in today’s world to be exposed to the right ones due to a variety of factors, such as the increased use of antibiotics, more C-section births, fewer breastfed children, better sanitation, foods with fewer live microbes, and fewer animals living in our homes.2
The composition and number of microbes vary depending upon the region of the body where they are found. Microbes can even differ per person; there are about 1000 species per person and about 2,000,000 microbial genes per person.3
Although the human microbiome stabilizes around age 3, it can change as people age or in response to a disruption in diet, environment, drug, or disease state. Many diseases and conditions are associated with an altered microbiome. “Does the disease change it or does it change because of the disease? We don’t yet know,” Dr. Merenstein said during the presentation. What we do know is that the microbiota of healthy people differs among people with conditions ranging from asthma to colon cancer to diabetes to HIV to necrotizing enterocolitis (NEC). NEC in premature infants has multiple etiologies. One major factor for the development of NEC might be the colonization of the gut with abnormal microbiota.4
In a study of preterm infants, the intestinal microbiota in 9 patients with NEC was compared with that of 9 matched and unaffected control infants. The infants studied all had birth weights less than or equal to 1250 grams and gestational ages less than or equal to 32 completed weeks. Weekly stool samples were collected, beginning with the first stool and continuing until the completion of the study.
The Cochrane Database of Systematic Review also conducted a meta-analysis of 20 studies covering 5529 infants, looking at the safety and efficacy of probiotics in treatment of sepsis and NEC of preterm infants. That study concluded that “enteral probiotics supplementation significantly reduced the incidence of severe NEC (stage 2 or more) and mortality.” They concluded: “Enteral supplementation of probiotics prevents severe NEC, and all cause mortality in preterm infants. Our updated review of available evidence strongly supports a change in practice.” 5 As Dr. Merenstein said, “Cochrane is generally very conservative in their recommendations. This is a bold statement [to say] that they [probiotics] should probably be offered to everyone in the NICU.”
Other studies have suggested a link between an altered microbiome and an array of respiratory, GI, and atopic diseases.

Probiotics and Prebiotics: An Overview
According to the International Scientific Association for Probiotics and Prebiotics, “Probiotics are live microorganisms that, when administered in adequate amounts, confer a health benefit on the host. A prebiotic is a substrate that is selectively utilized by host microorganisms conferring a health benefit. A fermented food or beverage is a type of food made by extensive microbial growth.”

Fermented Foods
Fermented foods are a source of live, active microbes. These foods are made through controlled microbial growth and enzymatic conversions. Historically, these foods have been used because of their improved shelf life, safety, and taste. Although they can be found in foods, “a fermented food is not a probiotic; however, a fermented food can be a probiotic but it needs to have a study that shows a health impact,” said Dr. Merenstein. “While I’m not opposed to them, they do not fit the definition of a probiotic.” Although fermented foods are not probiotics, they can be, and in fact, some have been, studied for their efficacy.6
Probiotics
Probiotics can be found in places such as foods, supplements, infant formula, and pharmaceuticals. Strain can be important in determining which probiotic or combination of probiotics to prescribe to patients, though they may all derive from the same species (eg, Bifidobacterium lactis, strains DR10 and Bb-12). Each strain has a different indication and performance.
“Most importantly is that the strain, and the [delivery mechanism] has been studied and has been proven effective … and that patients know how to store it and how much to take,” said Dr. Merenstein. “The one place where strain has been shown to be less important may be for GI issues where many probiotics have been shown to work.”
But are probiotics safe? The Agency for Healthcare Research and Quality commissioned the Evidenced-Based Practice Center at RAND to do a safety review of probiotics used in research. Of 622 studies reviewed, randomly controlled trials showed no statistically significant increased risk of adverse events in low-risk participants (RR 1.00; 95% confidence interval [CI]: 0.93, 1.07, P=0.999). Although the studies suggested participants with compromised health are more likely to experience adverse effects, medium- and high-risk participants showed no statistically significant increased risk compared with the control group.7 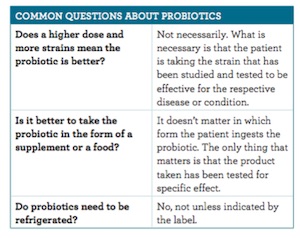 Prebiotics
Dr. Merenstein explained prebiotics, as, “A substrate that is selectively utilized by host microorganisms conferring a health benefit.” He continued, “one way to think about them is unlike a probiotic that is an added microorganism, they help the microorganisms already in your body or help a probiotic you are taking.” Prebiotics are dietary ingredients found in some plants, usually fibers, such as onions, garlic, bananas, chicory root, and Jerusalem artichokes, though at levels low enough such that supplementation is usually indicated. Prebiotics appear to have the potential to endow many benefits beyond GI health, regulation of immunity and metabolism, improved brain function, more energy, and a decrease in blood lipids.

The Tipping Point
There has been a 156% increase in probiotic usage in the United States in the past 10 years. Dr. Merenstein emphasized the need for an evidence-based approach when using any probiotic, especially in today’s world where they are mentioned regularly in the media and there are many different products on the shelves.
In an article written for the International Scientific Association for Probiotics and Prebiotics, it was noted that “the 3 large health care systems that operate near me in the Washington DC area carry a probiotic product in their formularies that has limited to no evidence base,” he wrote. “Recently, I reached [out] to the American Society of Hospital Pharmacists to see if ISAPP could work with them to develop a more evidence-based approach to  the products offered in hospitals. I am confident that a tipping point has been reached and that in a few years nearly all hospitals and physicians will adopt and evidence-based approach to probiotic administration.” 8
Continuing his discussion, Dr. Merenstein presented some papers that are suggesting probiotics’ impact on various diseases.

Probiotics and the Respiratory Tract
Recent studies have evaluated the effectiveness of probiotics on upper respiratory infections. A review was conducted using 20 randomized controlled trials to evaluate the effect of probiotic strains Lactobacillus and Bifidobacterium on the duration of acute respiratory infections in healthy adults and children.
“Meta-analysis revealed significantly fewer numbers of days of illness per person, shorter illness episodes by almost a day, and fewer numbers of days absent from day care/school/work in participants who received a probiotic intervention than in those who had taken a placebo,” according to the researchers. The average decrease in the duration of illness was 12 to 24 hours in those who took the probiotic, versus those who took the placebo.9

Summary
During the closing statements of his talk at the meeting, Dr. Merenstein said that “data support usage of probiotics, but it is important for health care professionals to set realistic expectations for those patients who express interest in using them. They aren’t the new penicillin. They aren’t going to work for everything. However, there is a long list of diseases and conditions where we do have a lot of data for their efficacy, such as colic, GI symptoms, etc.”
The most important thing to remember when counseling patients about use is to use a product tested for a specific effect, Dr. Merenstein said. “Make sure that the strain has been studied and proven effective and that the patient knows how to store it and what the correct dosage is. If a prescribed product isn’t working after 3 to 4 weeks, then try to move the patient to a different strain. Even small chang- es in the health of the microbiome are important, especially because the cost of probiotics are low and adverse events are not significant.”
Dr. Merenstein added, “regarding the Clinical Guide to Probiotic Products, I have some issues with their grading but it still is one of the better reviews in terms of usability.” 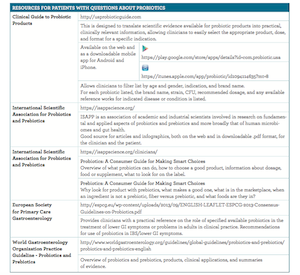