A federal grand jury has indicted notorious big-cat breeder and roadside zoo operator Joseph Maldonado-Passage, who likes to go by the name “Joe Exotic,” for allegedly orchestrating a murder-for-hire plot targeting a big-cat advocate and rescuer.

Maldonado-Passage—also known as Joe Maldonado and Joe Schreibvogel—had been the entertainment director and previous owner of the infamous ramshackle roadside zoo The Greater Wynnewood Exotic Animal Park (“G.W. Exotic”) in Wynnewood, Oklahoma, until earlier this summer. The U.S. Department of Justice charged him with two counts of murder-for-hire after he allegedly attempted to hire an undercover FBI agent and another individual in two separate attempts to kill Carole Baskin, the CEO of accredited wildlife rescue organization Big Cat Rescue in Tampa, Florida.

Big Cat Rescue and PETA have both been working for years to shut down G.W. Exotic (which has also undergone several name changes), including with eyewitness investigations and legal action.

A PETA eyewitness investigation in 2006 revealed that sick, injured, and dying animals were denied veterinary treatment or even humane euthanasia. Animals were kicked, deprived of food, blasted with pressurized hoses and fire extinguishers, and beaten with the blunt end of a gun. Following our investigation, the U.S. Department of Agriculture (USDA) put Maldonado-Passage on probation for 18 months and ordered him to pay a $25,000 fine for nearly 200 violations of the federal Animal Welfare Act.

For years, this roadside zoo has bred tiger cubs and been the primary supplier of cubs for use in traveling shows and public photo encounters—even after the USDA opened an investigation into the deaths of 23 tiger cubs at the facility in just seven months. Just last year, PETA rescued 39 tigers from the roadside zoo, along with three bears and two baboons, and got them placed in reputable sanctuaries. More recently, we helped get the two chimpanzees at the facility into an accredited sanctuary. And we have two lawsuits pending against facilities that acquired cubs from Maldonado-Passage for alleged violations of the Endangered Species Act.

He has made threats against both Big Cat Rescue and PETA, including posting a video in which he shoots a doll made to look like Baskin and posting an image in which he hangs a mannequin labeled “BCR” and one labeled “PETA.” 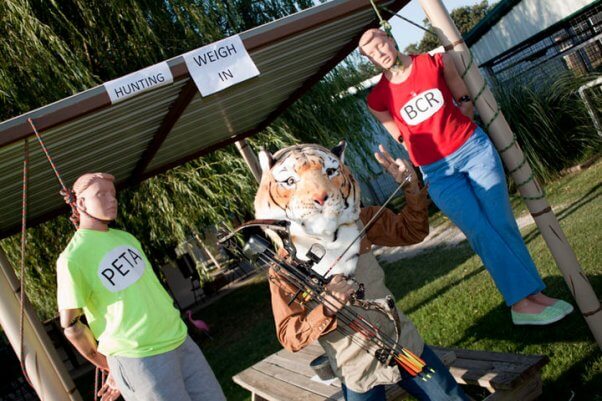 If convicted in the murder-for-hire plot, Maldonado-Passage could face up to 10 years in prison and a fine of up to $250,000 for each count.

Animal abuse isn’t a mere indication of a minor personality flaw in the abuser—it’s symptomatic of a deep mental disturbance. Research in psychology and criminology shows that people who commit acts of cruelty to animals don’t stop there—many of them move on to their fellow humans.

PETA continues working to free the remaining animals from G.W. Exotic, and we urge everyone not to support abusive animal shows or exhibits.