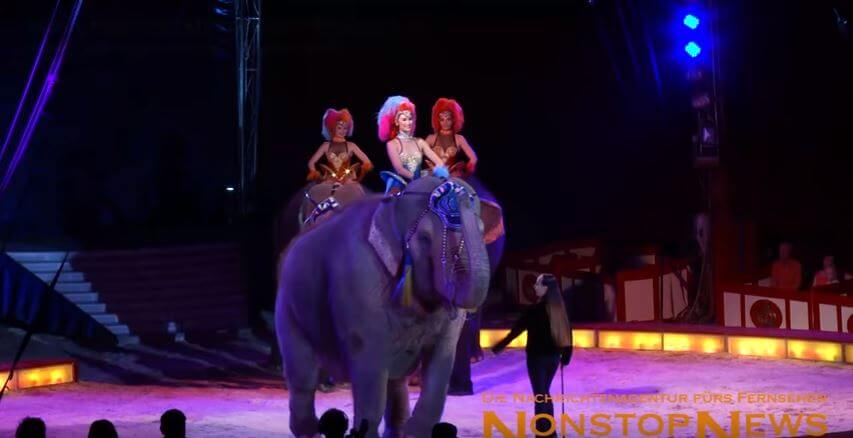 A sad video taken during a performance of Germany’s largest operating animal circus, Circus Krone, shows an elephant named Mala being shoved into a group of spectators and then crashing to the ground. Two other elephants, who were also being forced to perform, rammed her until she toppled into the crowd. She was reportedly injured in the incident and her leg was swollen afterward.

In captivity, animals from different regions and families are often mixed into incompatible groups. Being forced to perform under the threat of physical punishment adds to their frustration. Handlers quickly forced the two elephants who shoved Mala back to their spots with ever-present bullhooks—sharp steel-tipped weapons.

Just last month, another elephant broke out of a Circus Krone show and enjoyed a few minutes of freedom before she was recaptured and taken back.

PETA Germany has been exposing cruelty to animals at Circus Krone for years. Elephants used by the circus are reportedly tied up for 18 to 20 hours a day. Authorities found that when not on tour, it keeps animals in conditions that violate numerous animal-welfare regulations, including confining them to small enclosures.

The video has been picked up by major news outlets in Germany, resulting in renewed calls for lawmakers to ban circuses from forcing wild animals to perform. The country is one of the last in Europe that has not yet imposed such a ban. Animal advocates there can sign PETA Germany’s petition, and those of us in North America can use PETA’s Rapid Action page to help get suffering animals out of traveling performances.