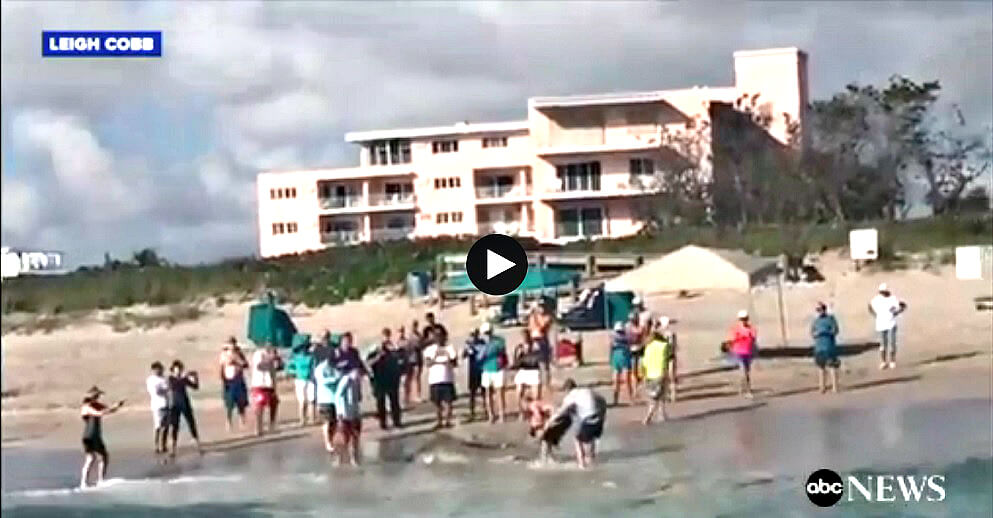 Sometimes, humans forget that animals have feelings, too, and cause them to suffer. Just consider some Florida beachgoers who were filmed taking photos of and selfies with an injured hammerhead shark, who an expert says most likely died after the incident.

On a beach near West Palm Beach, Florida, a group of people pulled a shark out of the water in an attempt to remove a fish hook from a fin. This was their first mistake, as sharks, and especially their gills, should always be kept in the water. But the incident wasn’t over yet.

Not understanding sharks’ needs or not considering this one’s well-being, the crowd unfortunately turned the event into a photo op. Shark activist and educator Leigh Cobb, who filmed the incident, is heard in her video screaming at the people to put the animal back in the water. Eventually, they did push the shark back into the ocean but not before likely doing some deadly damage.

“[Great hammerhead sharks] don’t survive after being taken out of the water,” Cobb told ABC News. She noted that high stress levels (which could result from having a crowd of people tugging at the shark) can cause an irreversible lactic acid buildup—which often leads to death.

“[That shark] will die within two weeks,” she said. “Absolutely no doubt about it.”

Given that hammerheads rarely come this close to shore, it’s suspected that the shark was lured in with fish blood— known as “chumming.” Because of human activities like overfishing and the shark fin soup industry, hammerhead sharks are an endangered species. The last thing they need is the stress of being used in selfies.

The Florida Fish and Wildlife Conservation Commission is aware of the video and has asked for any information about the incident.

Animals are not ours to use as props!

If there’s any chance that your photo is going to hurt a living being, it’s not worth taking it. Yet time and time again, we’ve seen animals routinely injured, exploited, and killed because of human vanity. Turtles have been beaten by crowds, sharks have been dragged from the ocean to die, and baby tigers are torn away from their mothers—just so that people can take photos with them.

All these victims were thinking, feeling individuals who, just as we would be, were terrified when intruders pulled them from their homes and physically abused them—sometimes to death.

Help us stop this trend of deadly ignorance by sharing this story with your friends, family, and social media followers. Let them know that animals’ lives are worth so much more than Instagram likes or heart reactions.

Remember, if you see something, say something. If you ever witness someone endanger or mistreat an animal, call the police immediately. If the authorities don’t respond, contact PETA for help.