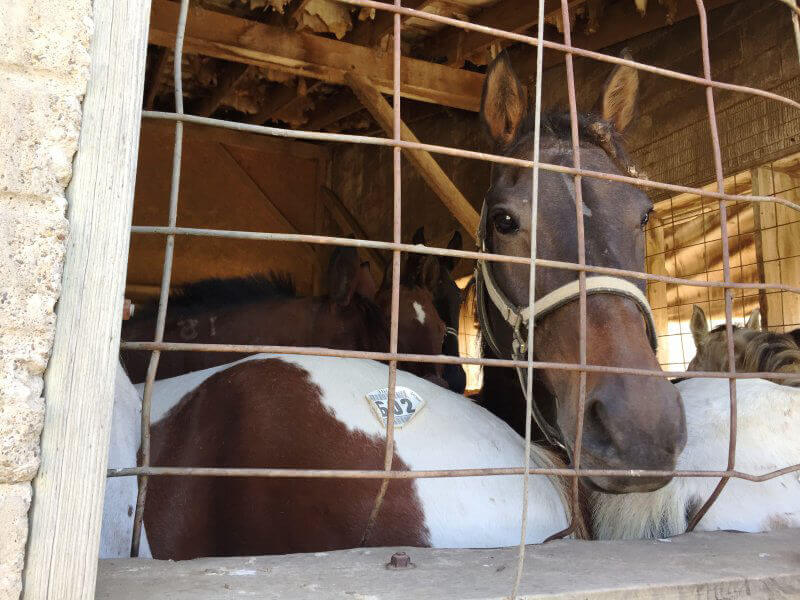 The Kentucky Derby—and other races like it—aren’t all mint juleps and fancy hats. There’s a duplicitous undertone to every whoop and holler sent up for any horse forced to race—because every year, some cast-off horses are crammed into livestock trailers and transported to slaughterhouses in Canada and Mexico, where they endure a dismal, horrifying death.

Because many race horses’ “careers" end in a slaughterhouse where they are turned into DOG FOOD & GLUE. pic.twitter.com/3h61Qj3ejn

Even horseracing stars can end up in a slaughterhouse. Take Ferdinand, for example, the 1986 Kentucky Derby champion who was slaughtered in 2002 after his breeding days in Japan were over. But PETA is working hard to help these horses beyond their racing careers:

The @KentuckyDerby is today. To prevent former racing Thoroughbreds from being slaughtered, PETA has asked all "owners" of horses slated to run in the #KyDerby to donate $15K each to the @TBaftercare. #KentuckyDerby

Every year, nearly 90,000 American horses endure days of transport in cramped trailers to countries where horse slaughter is legal. During transport, these animals have no access to food, water, or medical attention—even though many sustain injuries during the ride. In this video, a PETA eyewitness exposes the fate of these unwanted horses, from the auction house to the supermarket, by getting on board a slaughterhouse-bound truck:

Many of these horses are former companion animals or were used for sport and have been treated with drugs that are not safe for human consumption—although their flesh is exported to countries such as France and Japan, where horsemeat is considered a delicacy. These stomach-churning scenes from a PETA eyewitness investigation at a horse slaughterhouse show horses, discarded by the racing industry, being slaughtered and hacked to pieces:

Although horrifying, the reason behind the enormous death toll is quite simple: supply and demand. A staggering 130,000 American horses of all breeds were slaughtered in Mexico and Canada in 2015, yet irresponsible breeders continue to churn out hundreds of thousands of horses annually. Government statistics from a few years ago show the Thoroughbred-racing industry sent an estimated 10,000 horses to slaughter annually, meaning that half of the 20,000 new foals born each year have eventually been killed for their flesh. These horses aren’t just trying to outrun one another—they’re trying to outrun the butcher.

PETA’s Work Is Paying Off

PETA knew that excessive breeding without adequate retirement provisions would continue to result in more deaths. So in 2011, we provided The Jockey Club with a detailed proposal for implementing and funding a Thoroughbred retirement program—the Thoroughbred 360 Lifecycle Fund. Our pitch was embraced by the racing industry and became the funding model for today’s Thoroughbred Aftercare Alliance (TAA).

PETA is working with the horse racing industry to help start the first industry-supported retirement program for horses. RT to help send horses to retirement – not slaughter! #KentuckyDerby pic.twitter.com/5c4dUW2w3x

But we didn’t stop there. Last year, following growing concerns that insufficient funds could mean that some Thoroughbreds would continue to end up being sold at auction and sent to slaughter in Canada or Mexico, we conceived a first-of-its-kind technology for horseracing wagering terminals—a pop-up screen that asks bettors to donate a portion of their winnings to the TAA. In a statement, the TAA acknowledged that PETA sought zero compensation for the concept and said that it’s “thrilled with the potential of this technology to help Thoroughbreds beyond their racing careers.”

The Proof Is in the Numbers

Help PETA Save These Horses

This year’s Kentucky Derby may be over, but that doesn’t mean that PETA will stop working to save these horses’ lives. Get to know some of the horses used for racing we’ve rescued over the years—including Coming Home, Royale With Speed, Valediction, and Charlie’s Quest.

As you read these inspiring stories, you’ll discover how Jillian Michaels, Sam Simon, and others joined PETA in saving these horses. Will you join us, too? It’s easy—click the button below to urge your congressional representatives to end the transport of American horses to foreign slaughterhouses: