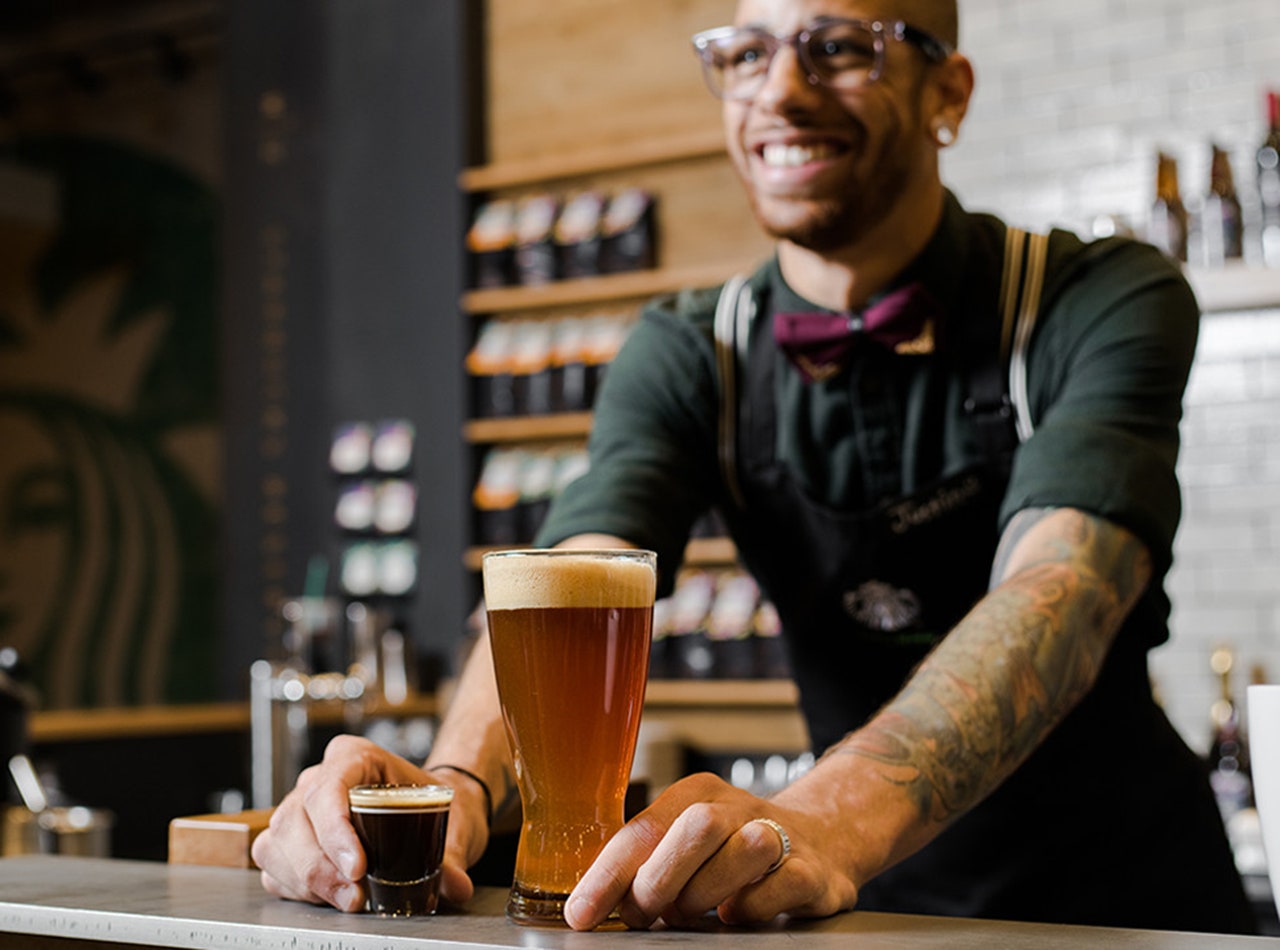 Starbucks has unveiled its first official boozy coffee drink. The Espresso Cloud IPA, an espresso and beer combo, is available in select Starbucks locations across the country as part of the chain’s “Evenings” menu. The drink, which was created by Starbucks coffee master

Justin Burns-Beach, is made when espresso is shaken over ice with orange pieces and a “touch of sweet vanilla,” according to the company’s website. This creates a “cloud” of foam that’s layered on top of an IPA. The drink is also served with a shot of espresso on the side, which customers are encouraged to pour in the beer before drinking up.

It’s an interesting idea, and they’re certainly hopping on a popular bandwagon. Women’s health expert Jennifer Wider, M.D., tells SELF that Starbucks isn’t the first company to offer drinks that mix caffeine and alcohol—many restaurants serve Irish coffee (coffee mixed with Irish whiskey), Kahlua-based drinks, and cocktails like rum and Coke. Like basically anything else, the mixture of alcohol and caffeine is usually fine in moderation.

However, she says, “there is evidence that the combination can impair the drinker’s judgment more than alcohol alone.” Jennifer Haythe, M.D., assistant professor of medicine at Columbia University Medical Center, agrees, telling SELF that going overboard when mixing caffeine and alcohol can be “very dangerous.” She adds, “The combination can lead to risky behaviors.”

For example, research from Wake Forest University found that study subjects who mixed alcohol and caffeine-based energy drinks were at a greater risk of things like riding with drivers who were under the influence of alcohol and being injured. Another study published in the Journal of Adolescent Health discovered that college students who had caffeine and alcohol together were more likely to drink more, get more intoxicated, and make a decision that they later regretted.

, not coffee, and there’s a little more caffeine in an energy drink than a single shot of espresso. (For example, one can of Red Bull contains 111 milligrams of caffeine, while one shot of Starbucks espresso contains 75 milligrams of caffeine, although the Espresso Cloud IPA’s foam might bump up each drink’s caffeine content.) Also, neither study establishes causation, only correlation of certain outcomes.

Jed Magen, an associate professor and chair in the Department of Psychiatry at Michigan State University, tells SELF that having one Espresso Cloud IPA is “probably not too much of a problem” when it comes to things like mental impairment. However, having three or more of these drinks in one sitting is “not a great idea,” he says, largely due to its high alcohol content and all that caffeine.

It makes sense in theory that having a stimulant and depressant together would cancel the effects of both out, but Wider says that’s not the case. Caffeine boosts the body’s reactions. As a result, your blood pressure

and heart rate increase, Wider explains. Alcohol acts by slowing down your brain’s functioning, which can impair your judgment, thinking, and motor skills. While they can’t fully cancel each other out because they affect different systems, caffeine can offset alcohol’s sedative effects, Wider says. It can also delay the feeling of being drunk, which could just make you drink more, which can lead to negative consequences like a higher likelihood of unprotected sex and car accidents.

If you have too many caffeinated alcoholic drinks, not only will you get intoxicated, you may feel more awake and capable of doing things than you really are, Haythe says. As a result, you might get less sleep, which won’t do any favors for your overall health if you consistently drink these beverages.

Drinking a moderate amount of alcohol and caffeine together may make you feel weird, Magen says. On the other hand, you might feel completely fine, if buzzed. It ultimately depends on how much the two impact you on an individual basis. If you feel jittery after having a cup of coffee or tipsy after a pint of beer, this might not be the drink for you. However, if you can have each with no huge side effects, it might be worth a try—as long as you know your limits.