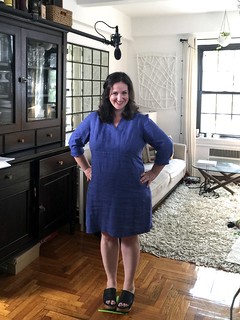 Have you ever wanted to go behind the scenes here at the Smitten Kitchen? Like, really behind the scenes, watching me cook, listening to me chatter about how the recipe came about and grimacing at my terrible knife skills? Phew, I was hoping you would say no because I’m excruciatingly awkward in person and also on camera and since we all agree, you can just come back in a day or two and we’ll proceed with a new recipe like we always do. Right?

Well, if you’re still here, you might be the kind of person who likes today’s kind of crazy news which is that the Food Network has launched a Smitten Kitchen digital series and you can watch the first episode right here:

In this first episode, I am making a wildly inauthentic and only somewhat apologetic spaghetti carbonara pie in the style of this pecorino and black pepper springform-bound one. This one uses crispy pancetta, is heavier on the yolks, just like real carbonara, and then broccoli rabe too, not at all like the real stuff. It’s crunchy and rich and salty and cheesy and because it has greens in it, basically a salad. We inhaled it.

You can make it too; on the recipe is on the Food Network website.*

Now, if you’ll excuse me, I’m doing one of these. I understand that as an adult with zero responsibilities, hiding under the covers forever is totally within my rights.

Except first I thought it might be fun to show you a little behind-the-scenes because if you’ve been around for a while, you might have heard me repeatedly mention that we live in a small apartment, like, the four of probably only fit because we like each other. What happens when 13 people and 4 cameras and so, so many lights and boxes of equipment arrive? 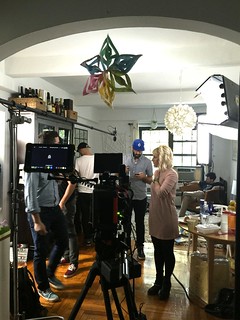 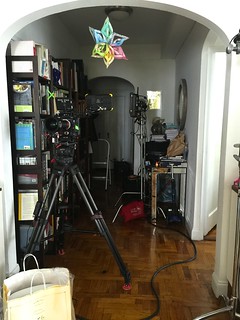 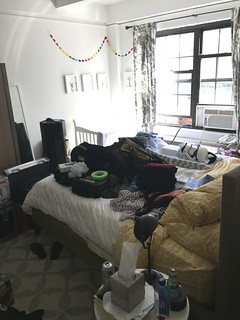 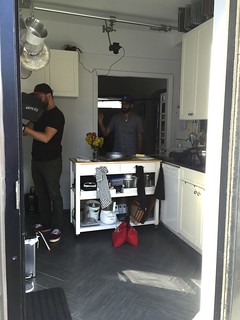 Which brings me to some very important questions:

Did they put everything back?

Yes. It was magical. I keep trying to tell them to come back because they forgot to put some “stuff” away [namely some toy explosion in the living room from two hours ago] but they’re not buying it.

Do you really have a carpet that looks like a Hungarian sheepdog?

You’re changing the subject. How did they talk you into shooting at your apartment?

The conversation over last summer went something like this:
“… And of course, we’ll shoot here.”
“Here? Here? No.”
“I think people want to see where you live.”
“That’s what Instagrams with 3 filters are for.”
“I think people want to see you cook in your kitchen.”
“I think they’ll change their mind once they actually do.”
“We’ll get you hair and makeup.”
“I’m listening…”
“People like a small apartment. It’s cozy.”
“I disagree! I think people like articles about that crazy 250 square-foot house or ‘Look how roomy this couple made their their 300-square foot studio look!’ Do you know what the photos of those perfectly curated rooms never have in them? People! If you saw a person sitting in one of those mini-chairs with their legs reaching across the living room, it would unravel.”
[Everyone looking sideways at each other because I really do ramble on this long in person too.] “I promise we can make it look as un-claustrophobic as possible.” 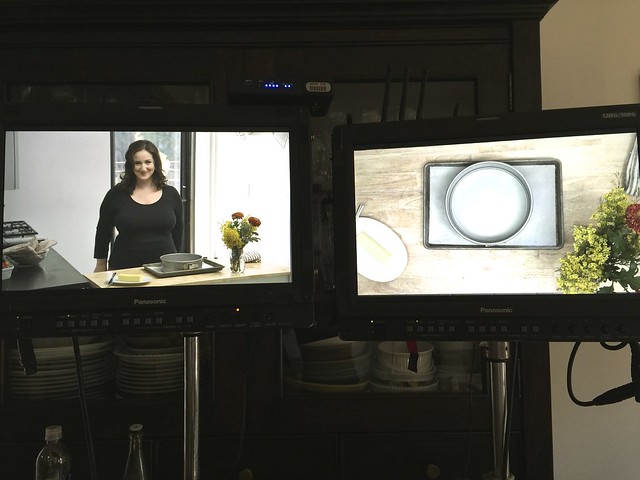 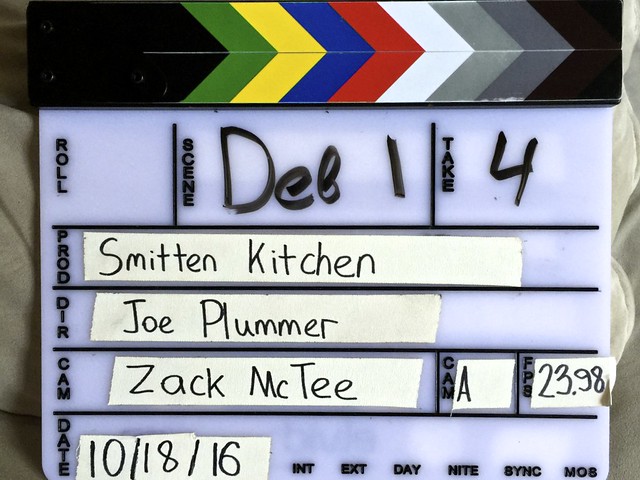 That’s exactly what I was thinking! And then, and I’m not even kidding that it took me two hours to realize this, they actually moved the fridge! Out of the kitchen! And then they moved this cart I use as a counter to look like it was attached to the real one. And even though the kitchen was no longer actually functional (like, to walk across) all of this space appeared! It makes me fantasize about buying this apartment and gutting the kitchen and putting in one that optimizes the space and light. But that would require living in a 2BR/1BA with two kids forever, and I won’t live that long if I do.

Are you really Muppet pink?

I’ve been meaning to tell you guys… What actually happened was although we filmed this in October, it was one of those freak 93 degree 100% humidity days in NYC. However, all the camera and lights kept blowing fuses in this creaky old building, so we had to turn off the air-conditioners. And then, because I live in a noisy part of a noisy neighborhood and microphones apparently pick up everything, we had to close all the windows. 9 hours later, no blush was needed.

So, are you going to do it again? Will there be more episodes?

Yes! Despite all of my joking around here, it was fun. And this is where you come in! The Food Network has requested four more episodes and while we were going back and forth last week about what recipes we’d use and how we might adjust things when we shoot again, I had a much better idea: let’s ask you! 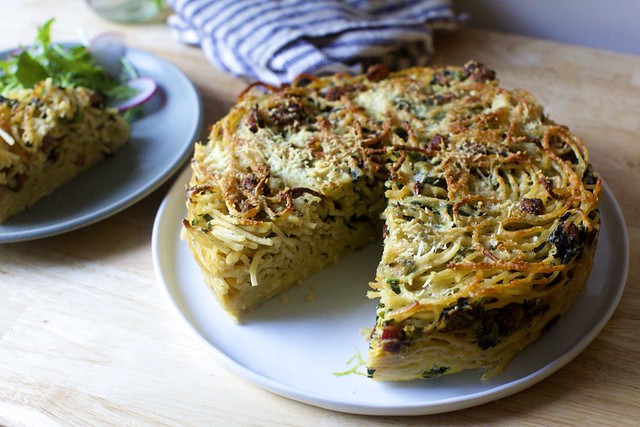 * Recipe note: And of course, because this is my real imperfect life and I’m not used to not having recipe headnotes to explain textures and options, I didn’t get to mention that this has more of a crispy, fritter-y lid and less custardy center than the first spaghetti pie we made here. (I see this has already come up in the comments.) You can add 1 additional egg and an additional 1/2 cup milk to the recipe to make it more solid; it will take up to 10 extra minutes in the oven.