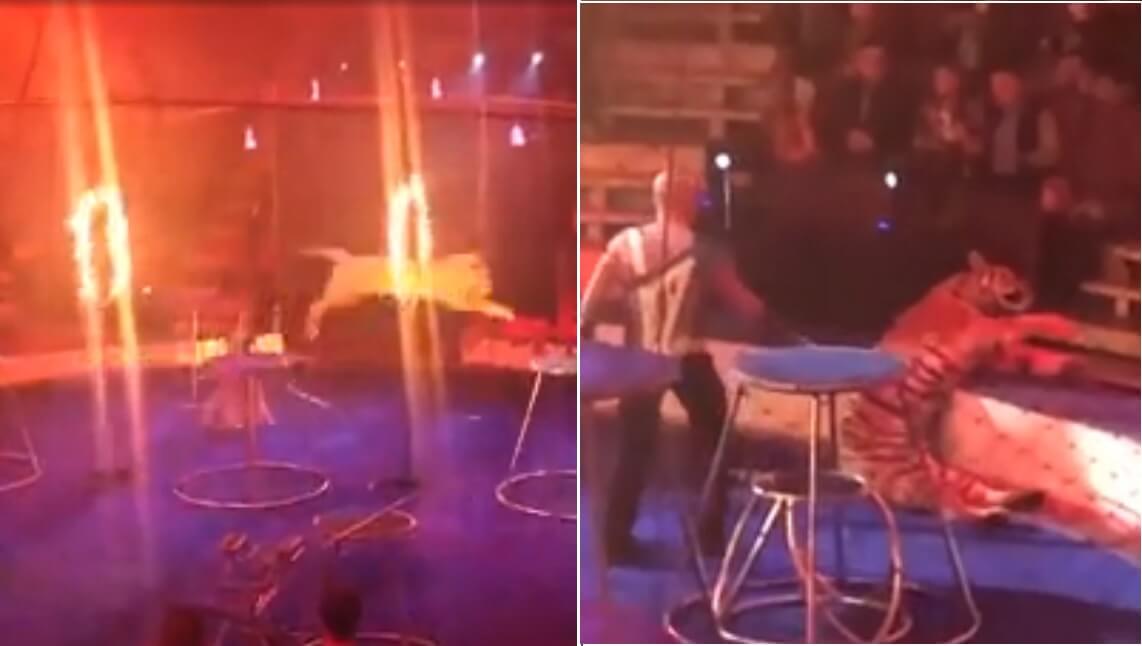 Animal circuses are inherently cruel, and PETA works hard to end them because we know frightened animals are beaten into performing uncomfortable tricks in front of noisy crowds. So imagine the terror that this tiger must have felt before collapsing and having a seizure right after she was forced to jump through rings of fire.

During a performance in Magnitogorsk, Russia, featuring brother-and-sister duo Artur and Karina Bagdasarov, a crowd looked on in shock as Zena, a 6-year-old tiger, turned this cruel spectacle into a medical emergency.

Moments after being forced to jump through numerous rings of fire, Zena collapsed and started convulsing—mere feet from the front row of the crowd. She continued to have a seizure while Artur yanked at her tail, attempting to pull her off a platform and onto the floor.

It appears that Zena had no control of her limbs as she sprawled out, still pulsating with tremors. At some point, she lost control of her bowels and defecated. Another handler dumped a bucket of water on her, but her condition remained unchanged. Artur then dragged the lifeless-looking tiger by the tail to another part of the arena, where multiple buckets of water were thrown on her. Wearily, she finally made it to her feet.

Even though most of the people in the audience were alarmed by the shocking scene, some callous onlookers reportedly laughed as the sickly Zena was convulsing on the floor.

The Bagdasarov siblings claim that the reason for her seizure is unknown. The Russian troupe has been hit with accusations of cruelty to animals for the way they handled the incident. Dumping water on Zena was completely inappropriate, as seizures must take their course naturally. Someone cannot be “snapped out” of one, and attempting to do so can be dangerous. For example, water can be inadvertently inhaled by an unconscious animal during a seizure.

Zena’s bleak life imprisoned in the circus certainly isn’t one of a healthy tiger in nature.

Tigers are innately terrified of fire, but they’re “trained” to jump through flaming hoops by being whipped and beaten into performing—amid loud music, a noisy crowd, and strange lighting, no less. Most likely, Zena came out of her seizure disoriented, confused, and anxious, with compounded fear from her stressful environment.

Isn't it so obvious that tigers don't belong in circuses? pic.twitter.com/Meafp8o4XS

When not being used for stupid tricks, animals like her are confined to cramped, often filthy cages and hauled from town to town. Typically, their only break from life behind bars is their short time performing—which is really no break at all.

Wild-animal shows are on their way out: Circuses are shutting down or dropping their animal acts, and hundreds of venues and dozens of communities are banning them. Yet some circuses— such as UniverSoul Circus—still exploit individuals, whose only fault is not being born human, for mere minutes of entertainment.

Please, join PETA in urging UniverSoul to eliminate all animal acts from its performances!