Levi’s claims that sustainability is sewn into the fabric of everything that it does, from its manufacturing process to its climate change initiatives. Yet the company continues to use cows’ skin for the patches on its jeans, even though it knows that animal leather has at least three times the negative environmental impact as most vegan leather. 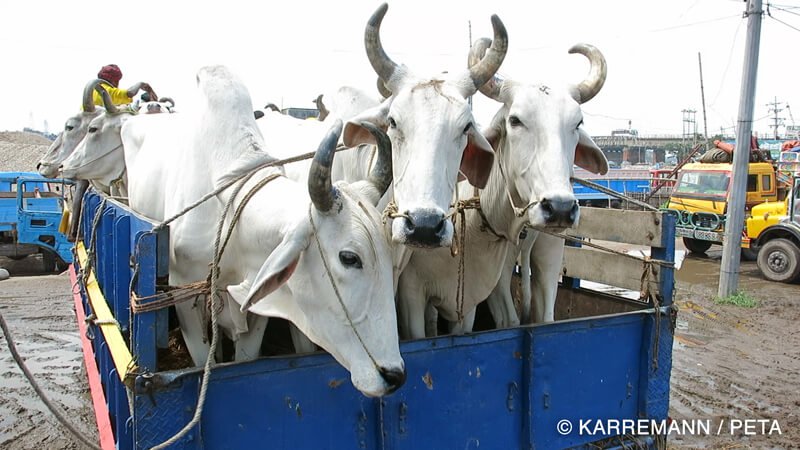 PETA is urging Levi’s to recognize that if the company is truly committed to sustainable and progressive practices, the most effective way to reduce its environmental impact is to use vegan materials. A great first—and easy—step would be to replace its leather jean patches with vegan leather ones.

Levi’s also claims that one of its core values is empathy. Animal leather often comes from cows who endure confinement, extreme crowding, disease, and food and water deprivation. Branding, tail-docking, dehorning, and castration are all commonly performed on them without painkillers, and they’re transported hundreds of miles to feedlots and slaughterhouses, where many are skinned while still conscious.

More and more consumers around the world are recognizing that it’s unacceptable to abuse and kill animals to make clothing and that leather isn’t a mere by-product, or left-over, of the meat industry. It’s an industry worth over $100 billion a year. Leather is an economically co-dependent product made to meet consumer demand, and it’s often more profitable than the flesh of the animal. It’s now also widely recognized that animal agriculture—including the industries producing its co-products, such as leather—is a leading contributor to climate change. Committing to using only vegan leather on its jean patches would be an easy first step toward legitimizing the company’s claims of being a sustainable and compassionate industry leader, and Levi’s would be joining the ranks of von Holzhausen, Tesla, and Jon Bon Jovi’s clothing line, all of which have already made the business-savvy switch.

Let Levi’s know that it must replace its animal skin with vegan leather immediately if it truly wishes to live by its values and protect the planet.