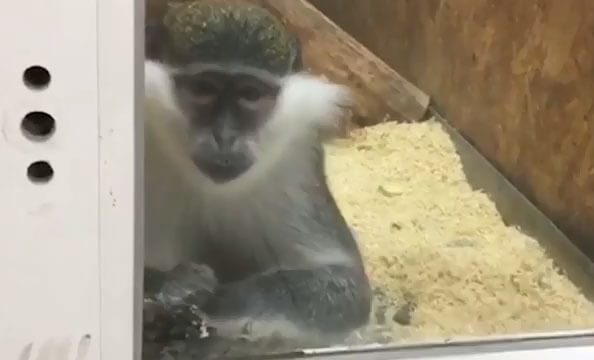 Imagine being forced to live in an enclosure so small that you have only a square foot or two at most to move around in, just so that people can stop and gawk at you as they shop. Such confinement is a reality for animals trapped at the Ukraina Shopping Mall in southeastern Ukraine.

The heartbreaking video footage above was captured by activists from The Save Movement. The mall’s display is just another cruel tourist trap based on animal exploitation.

These animals are going insane.

They’re locked inside enclosures that are hardly bigger than a small closet. In the video, a small vervet monkey repeats the same movement over and over again, a sign of psychological distress. The imprisoned raccoon can be seen continually walking back and forth the length of the enclosure, which is a few feet at most. The meerkat seen in the video appears to be living alone, which would be inappropriate for an animal who typically lives in large groups.

Animals shouldn’t be deprived of all that’s natural and important to them—not now, not ever.

There’s no justification for treating animals so heartlessly, which is why we’re urging the mall and local authorities to put an end to this cruelty by retiring them to reputable facilities.

Please, never visit an establishment that exploits animals—at home or abroad. Click below to do more for ones who are being similarly mistreated here in the U.S. This is your chance to speak up for them: