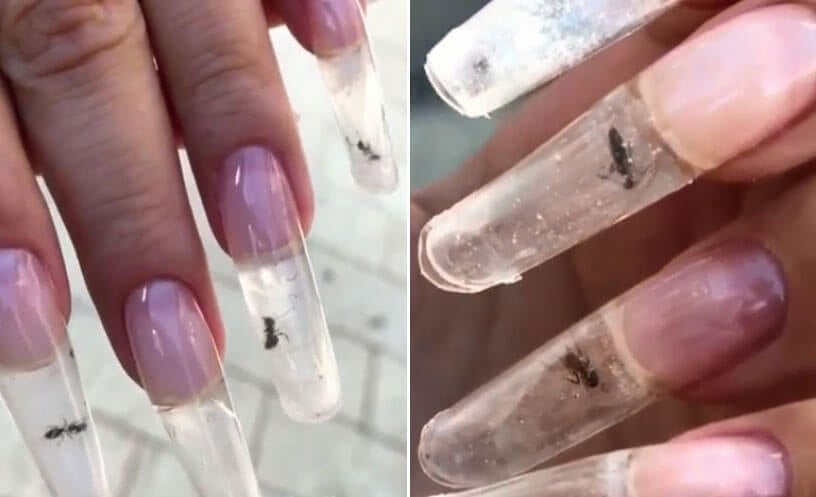 A video that shows live ants trapped inside acrylic nails has gone viral, but not in a good way. It was posted to Instagram two days ago by a Russian nail salon and has garnered tons of angry comments. Just watch how the ants run frantically. Like humans, dogs, orcas, and all other animals, they don’t want to be trapped in a tiny, unnatural space:

The nail salon’s caption claims, “[N]o animals were harmed during the making of this video,” but viewers weren’t fooled. Comments include the following:

“[T]aking intelligent little beings and trapping them inside a nail for [I]nstagram likes? [T]ruly pathetic.”

“That is beyond awful! I’m always shocked at the disconnect [people] have with other creatures on this planet. … [T]hey feel no guilt about taking a creature from its environment and suffocating it.”

“Disgusting! Would you like to be in their position????”

“This is disgusting! Animals are not a fashion trend or something. They are living beings and MUST be respect[ed]. Please set the ants free of those nails and never do this again.”

“No animals were harmed??? … Harm doesn’t equal death. They look really stressed and honestly the nails don’t look cool at all.”

People reacted similarly when the video was shared on Twitter:

“I wonder how long it took those ants to suffocate, though,” pondered one Twitter user.

We agree with all these comments. There’s nothing fashionable or trendy about this so-called “nail art.” These ants didn’t want to be ripped from their homes—their colonies—and trapped inside fake nails, where they have no room to roam and no access to food, water, or oxygen.

We may not always witness the day-to-day awesomeness of ants, but make no mistake—these animals are fascinating:

Ants may be small, but that doesn’t mean that it’s OK to use and abuse them.

Animals are not ours to use for adornments or decorations.

Want gorgeous nails? The only truly trendy manicure styles are vegan and cruelty-free. Luckily, having cute nails without harming animals is easier than ever. Just look for these PETA-approved brands, many of which are available in drug stores. Click below to learn more: