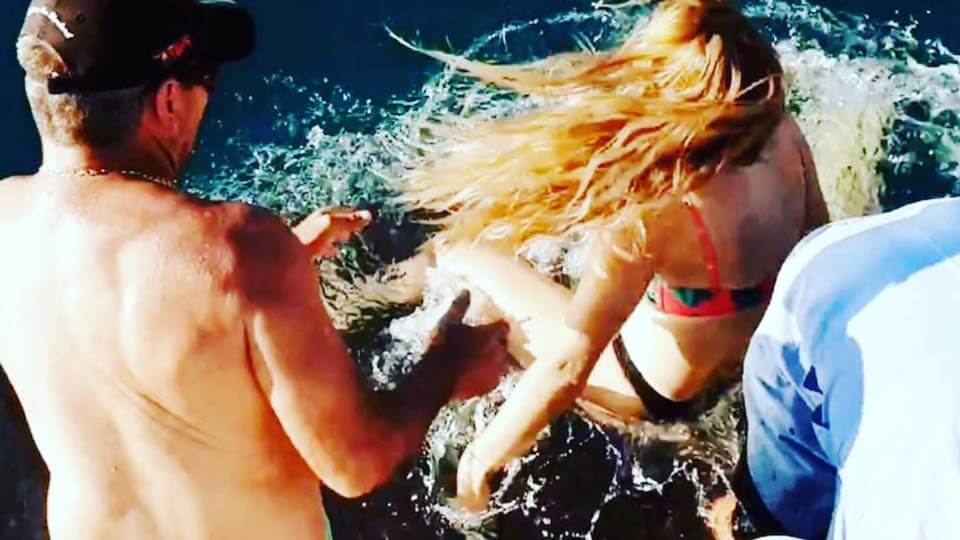 A shark grabbed hold of a woman’s finger while she was attempting to hand-feed the fish from the back of a yacht in Western Australia. Video footage of the incident quickly went viral:

Shocking video shows a shark biting the finger of a woman that attempted to feed it in Western Australia, dragging her into the water. She escaped with a fracture and a torn ligament. https://t.co/EWT1bFltDZ pic.twitter.com/C3cK488F2Q

ABC News and other outlets described the incident as “shocking,” but is there really anything that astounding about it? Melissa Brunning—the 34-year-old Perth woman whose finger was bitten by the tawny nurse shark—didn’t even find the incident surprising. She made it clear that she doesn’t consider herself a shark-attack victim, telling The West Australian:

“This is not a shark attack, this is just a blonde doing a stupid thing.”

After the video footage received substantial media coverage—including overzealous headlines like “Shark Drags Woman Into Crocodile-Infested Waters in Australia”—Brunning took to Facebook to speak up in defense of sharks and to encourage others to learn from her naïveté:

Brunning learned the ultimate lesson: to “respect marine [animals], and look at [them] in awe, but just leave them alone.” We couldn’t have said it better ourselves.

We get it—sharks are awesome. They’re among Earth’s oldest living predators. Many shark species give birth to pups—aka “live young”—just as humans do. And did you know that tawny nurse sharks—the species encountered by Brunning—have nearly 60 rows of teeth? These animals are fascinating, sure, but they’re also delicate and—just like any other animal—deserving of respect. Humans often fear sharks, but these animals are frequently the victims of human wrongdoings. Incidents in which sharks have been harmed or lashed out have occurred recently in Florida, Brazil, and the Dominican Republic—all because selfie-obsessed tourists refused to leave them in peace.

STOP USING ANIMALS FOR SELFIES 😠 Selfie-obsessed beachgoers use shark dragged from the water for a photo op. https://t.co/co0YRCdBRo pic.twitter.com/mYZ1A8BOnc

Animals aren’t props—and they’re not here for human entertainment. If you think that sharks are as interesting and regal as we do, great—safely observe them from a distance. Learn from Brunning’s mistake and don’t feed them. And never—ever—pay to interact with sharks or any other animal.

Animals’ lives are worth so much more than an exciting vacation story or Instagram “likes.”

Share Brunning’s story with your friends and family—and don’t let anyone you know make the same mistake: