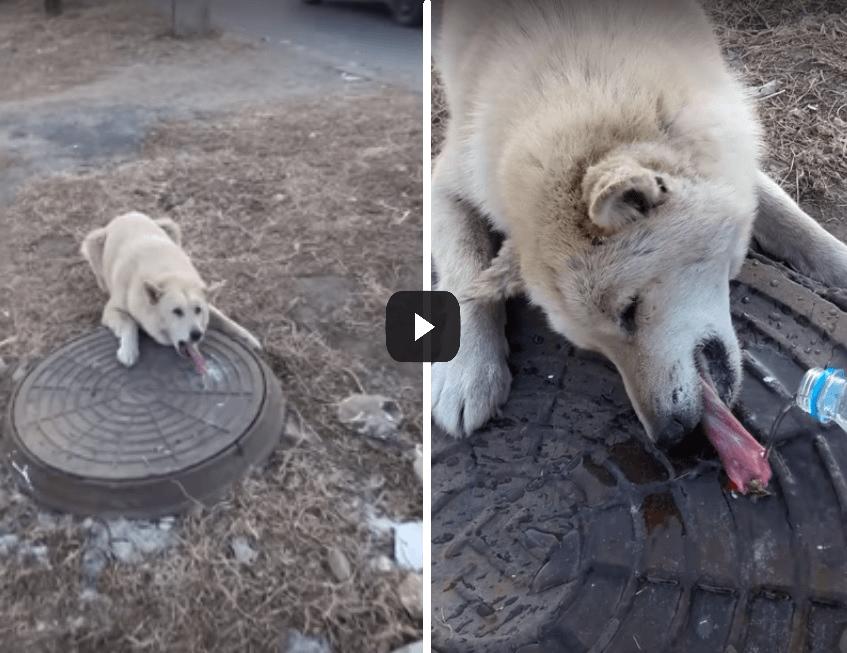 The frigid temperatures of winter can mean danger for companion animals who are stuck outdoors—sometimes in unexpected ways.

In Vladivostok, Russia, for instance, a good Samaritan helped to free a dog who had licked a cold manhole cover only to have her tongue freeze to the chilly metal. It was reported that recent daytime temperatures in the city averaged only 5 degrees Fahrenheit.

While the dog frantically tried to free herself, the man poured a bottle of water on the frozen area. Thankfully, his efforts were successful and she appears to have escaped the frightening ordeal without any severe injuries.

Props to this guy who acted when he saw an animal in need. It’s unknown whether the dog is homeless or has a guardian.

The most important thing that we can do in freezing temperatures is keep our animal companions indoors.

When the temperature drops, animals can suffer from the effects of exposure, including deadly frostbite, or become dehydrated when their water sources ice over. Small animals, those who are very young or elderly, and those with short hair are especially vulnerable, but winter temperatures are dangerous for all unattended companion animals. Don’t allow your cat or dog to roam outdoors. During cold weather, cats sometimes climb under the hoods of cars to be near the warm engines and are badly injured or killed when the cars are started.

Always keep an eye out for stray animals, who rely on us to protect them during extreme weather. Bring unidentified animals indoors until you can find their guardians or take them to an animal shelter. If strays are skittish or otherwise unapproachable, provide them with food and water and call your local humane society for assistance.

You don’t leave family members outside in the freezing cold to shiver and cry all alone. Treat your dogs like the valuable individuals they are. PLEASE bring them indoors to keep them safe ❤️ pic.twitter.com/MA2irQ2Jvh

Freezing temperatures can also mean extra hardships for “backyard dogs,” who often lack sufficient food, water, shelter, and veterinary care. If you know someone who refuses to bring animals indoors, please remember that U.S. law requires that dogs have adequate shelter. If you see an animal who has inadequate shelter or none at all, report it to authorities. Your call could save a life.

And of course, always get your animal companions spayed or neutered. Homeless animals are the most at risk during the winter months. If you want to bring an animal into your life, always adopt from a shelter. Every time that people buy from a breeder or pet store, they’re responsible for the death of a loving animal in a shelter who needed a home.

Help Dogs Left Out in the Cold

Every winter, we hear about dogs who have frozen to death. And even when freezing temperatures don’t kill animals, they’re still suffering in the cold. If you want to give an “outdoor dog” a sturdy, warm doghouse, become an “Angel for Animals” sponsor and help PETA provide a dog in desperate need with life-changing shelter.