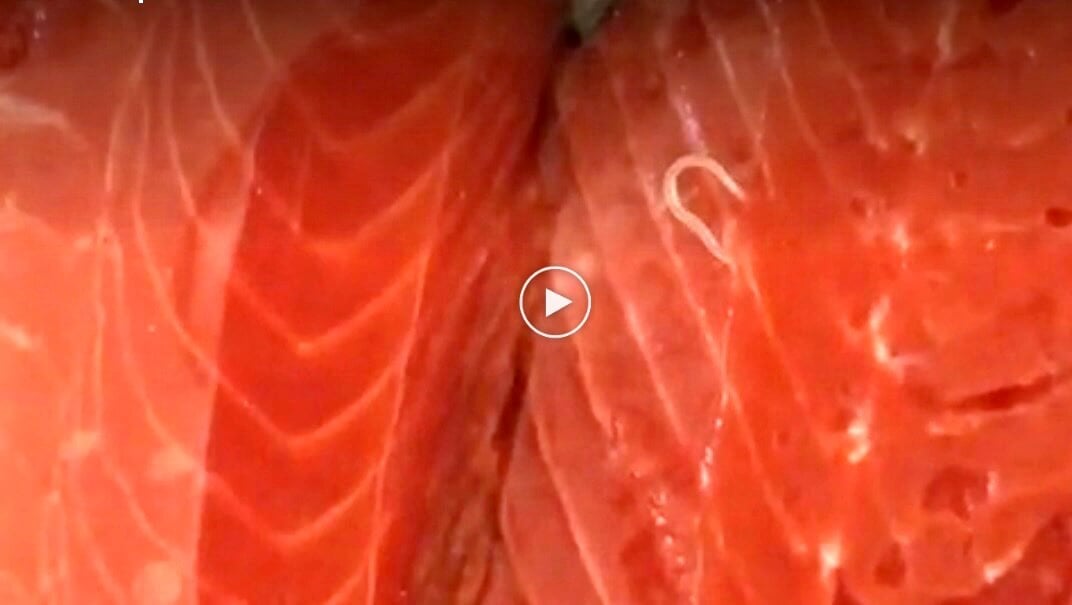 A woman was shaken up after finding a worm squirming about in some salmon flesh that she’d bought from Costco. Oh boy, do we have bad news for her.

The California woman told local TV station KRON4 that she was “grossed out” and had worried that the parasites in the flesh would contaminate her other food.

“[I]t isn’t your typical worm, parasite,” she said to reporters. “The scary thing about it, it looks similar to bones, and if you are not paying attention, you would just eat it and that is gross.”

Sorry (not sorry) to burst your bubble here, but parasites living inside fish corpses are absolutely typical.

Every kind of wild fish can contain nematodes (roundworms). Some foodies love to promote wild or “line-caught” fish over fish slaughtered at aquafarms, but they may actually be more susceptible to parasites. Biologists in Demark found that more than 90 percent of certain types of wild fish were infested with nematode larvae. Another study, by researchers in Alaska, revealed that all the fresh-caught salmon who were examined had nematode infestations. Scientists believe that rising average water temperatures because of climate change will significantly increase the number of worms found in wild fish.

Folks assume that thoroughly cooking fish or freezing it to proper temperatures rids the flesh of worms. But top chefs will tell you that fish preparation commonly involves cooking temperatures of only 120 to 130 degrees Fahrenheit—well below the 145-degree safety threshold. In addition, fish has to remain frozen at -4 degrees for seven days before worms are typically killed. And even if the fish is prepared “properly,” you’ll still be eating worm carcasses inside the flesh.

Besides those wriggling hitchhikers, fish in the wild also contain highly concentrated levels of chemical residue, including nerve-degenerating PCBs, lead, and mercury.

Staying away from the wild kind? Farmed fish carry their own disgusting additives.

Fish on aquafarms like salmon and shrimp are predators, and they’re fed those same fish from the wild who contain highly concentrated chemicals and heavy metals. In addition, severe crowding on fish farms causes injuries to the animals’ faces and fins in addition to major stress for them, leading to outbreaks of disease. The filthy tanks contain parasites like sea lice and can become so full of feces that they may as well be open sewers. Farm operators often use massive amounts of drugs just to keep fish from dying long enough for them to make it to slaughter.

There’s one simple trick to avoiding parasites in fish flesh.

Go vegan, already! There’s no way of consuming fish flesh that’s not cruel or just plain repulsive. Order a free vegan starter kit and see how easy it is to make the switch today.