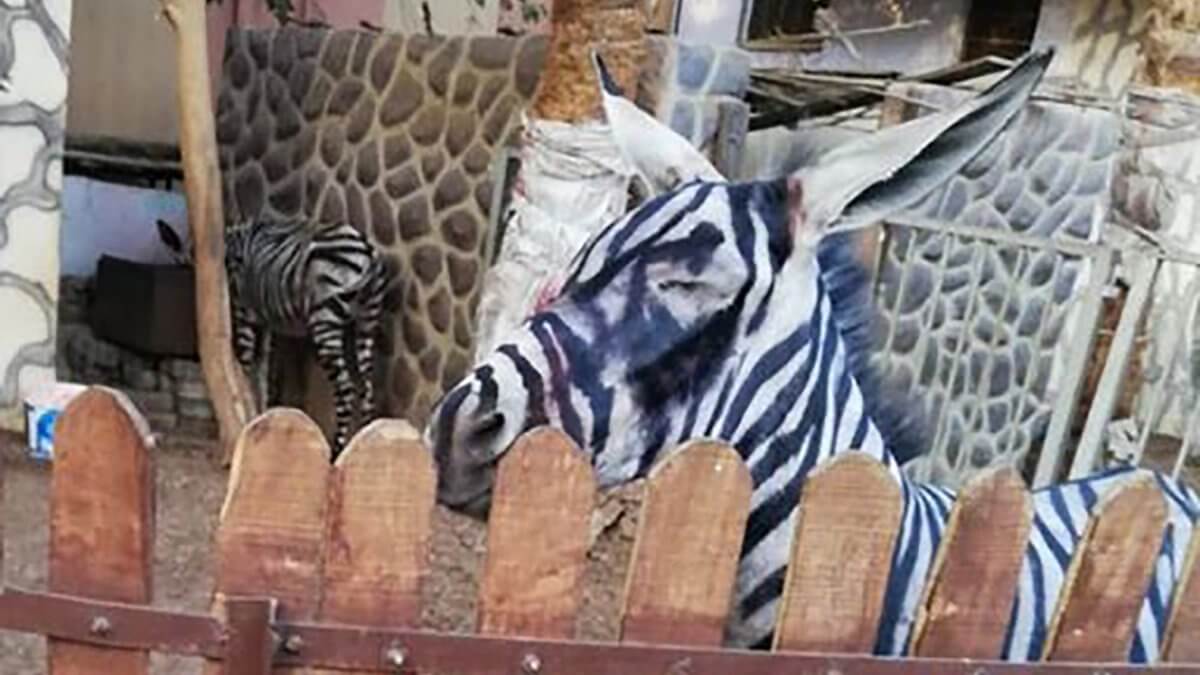 For proof that roadside zoos prioritize ticket sales over animal welfare, look no further than the sad spectacle of a donkey in Cairo reportedly painted with zebra stripes:

A zoo is accused of painting a donkey and passing it off as a zebrahttps://t.co/LFRJ2PuI7Z pic.twitter.com/ExZsTMx7AW

No reputable animal-care facility would subject skittish animals like donkeys to the stress of being restrained and sprayed with chemicals like paint, which could cause a painful allergic reaction.

A zoo in Gaza reportedly did the same thing in 2009. Its officials’ only justification was that they couldn’t acquire actual zebras because of an Israeli blockade.

In 2013, a Chinese zoo tried to pass a dog off as a lion. It was discovered that the actual lion had been temporarily removed from the enclosure—and replaced with a “hairy” Tibetan mastiff—in order to be bred so that more wild animals could be raised in captivity, doomed to suffer while being confined and used for human entertainment.

Which zoo offense is worse: dog as a lion, or donkey as a zebra? pic.twitter.com/WDqLji83IP

Officials at the zoo in Cairo are attempting to deny that they’ve painted these donkeys, but Snopes isn’t having it. The fact-checking site smartly pointed out that although different zebra species do exist, their stripes don’t typically “smudge.” It also uncovered a Google street view from 2017 that shows what appears to be the same enclosure inhabited by stripe-less equines.

An Egyptian zoo is insisting it did not paint a pair of donkeys to look like zebras.https://t.co/N746gTeA7c

We hope Cairo authorities are fully investigating the paint matter, and we encourage everyone to do their part to help animals like these donkeys.

If roadside zoos wanted to prioritize animal welfare, they wouldn’t paint or breed animals. We’re urging everyone who cares about wildlife to support organizations that protect animals in their natural homes and avoid any facility that keeps them captive in order to turn a profit. Click the buttons below to spread the word: